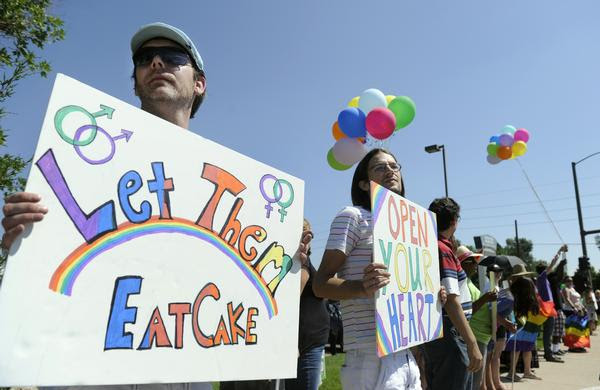 DENVER – The Colorado Civil Rights Division is telling a Lakewood, Colorado, baker he must violate his faith and create “wedding” cakes for same-sex duos, even though the state doesn’t recognize such unions.

The ruling came Friday from the state agency board in a dispute between Jack Phillips, a Christian baker who runs Masterpiece bakery, and two homosexuals for whom he declined to create a cake in 2012.

Colorado’s constitution doesn’t recognize “same-sex marriage,” and attorneys representing Phillips said the decision is a step too far.
“The government … seek[s] to impose a new belief system upon Jack [Phillips], one that is fundamentally at odds with his conscience and his liberty,” explained a legal filing from attorneys with the Alliance Defending Freedom representing Phillips and his Masterpiece Cakes in Lakewood.
Two homosexuals filed the complaint after Phillips declined to provide them with a “wedding” cake. Phillips offered to provide other products but, citing his own Christian beliefs, declined to produce a message on a wedding cake that conflicted with his faith.
Administrative Law Judge Robert Spencer, however, earlier ordered Phillips, on pain of fines or even jail time, to violate his faith and provide the wedding cake to homosexuals Charlie Craig and David Mullins.
ADF appealed the “erroneous” ruling, filing a petition for review to the commission.
But the commission on Friday upheld the administrative judge’s opinion, rejecting ADF contentions that Spencer, under the state’s court rules of procedure, should have dismissed the complaint.
The notice argues Phillips “did not discriminate ‘because of’ sexual orientation” but acted “in accordance with the provisions of the Colorado Constitution, state law and the public policy of the state.”
Phillips’ “conduct and expressions in declining to design and create a wedding cake are protected by the Free Speech Clause of the First Amendment of the United States Constitution and by Article II, Section 10 of the Colorado Constitution,” ADF stated.
The lawyers argued the case “involves both actual and symbolic speech” and Phillips and his company “cannot be forced to create and convey a message with which they disagree.”
Spencer was wrong, ADF contended, because “the ALJ’s recommendation that respondents ‘[c]ease and desist from discriminating against complainants and other same-sex couples by refusing to sell them wedding cakes or any other product respondents would provide to heterosexual couples’ is overbroad and exceeds the scope of relief authorized [under state law].”
“America was founded on the fundamental freedom of all citizens to live and work without fear of government punishment,” said Nicole Martin, lead counsel in the case.
The seven commissioners refused to listen to arguments Friday, instead ordering Phillips to submit quarterly reports detailing what he’s doing to prevent such actions, such as store employee training and a tally of whether any customers were turned away.
KDVR-TV in Denver said homosexuals Mullins and Craig went to the bakery for a cake for their “wedding,” which was scheduled to be in Massachusetts.
There was no apparent explanation why a cake would be purchased in Colorado for an event to be held in Massachusetts.
Phillips said his Christian beliefs prevented him from endorsing and participating in such events.
A staff attorney for the American Civil Liberties Union, which advocated for the homosexuals, said the treatment the homosexuals received had to be given priority over the nation’s First Amendment religious-freedom protections.
Martin pointed out that Colorado’s constitution has defined marriage as between a man and a woman, and she questioned whether a board of state employees could overturn it.
A decision on an appeal is expected to be announced soon.
ADF attorneys explained the issue in the case cuts to the basics of freedom in America.
“Jack simply exercised the long-cherished freedom to not speak by declining to promote a false view of marriage through his creative work. It’s outrageous that the government would turn its guns on Jack and threaten him with a potential jail sentence unless he says and does what the government demands,” Martin has said.
The legal team said the homosexual duo wants Phillips “to cease and desist from holding views about marriage that they disagree with, and conform his conscience to their definition of marriage.”
“Every artist must be free to create work that expresses what he or she believes and not be forced to express contrary views,” added ADF Senior Counsel Kristen Waggoner. “Forcing Americans to promote ideas against their will undermines our constitutionally protected freedom of expression and our right to live free. If the government can take away our First Amendment freedoms, there is nothing it can’t take away.” 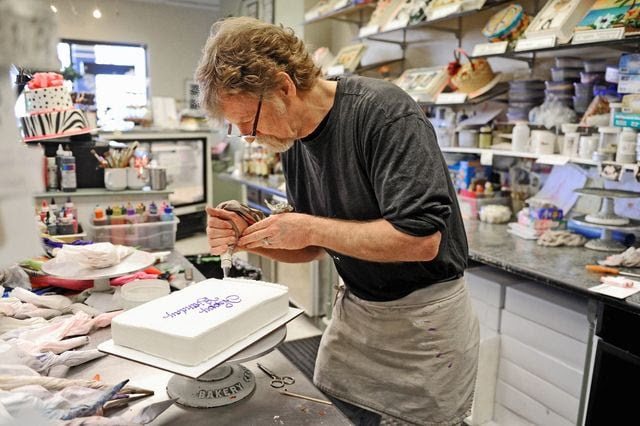 Jack Phillips, owner of the Masterpiece Cakeshop in Lakewood, Colo., cited conflicting religious beliefs when he declined in July 2012 to bake a cake for a gay couple's wedding reception. Photo/Denver Post
Phillips explained to WND he also would refuse to make certain other kinds of cakes based on conscience.
“If a couple were to come in and ask me to do an erotic cake for a wedding, I would refuse to do that as well,” he said. “These are my personal standards taken from Jesus Christ and the Bible.”
Spencer’s ruling said Phillips’ constitutional rights are secondary, because otherwise the “cost to society” isn’t considered. He granted homosexuals a special standard.
But the ACLU, which is representing the duo, said the same standard should not be used in other circumstances, such as asking a Muslim baker to make a cake criticizing his faith or asking a black cake maker to make a cake for the KKK.
Those bakers, because of their beliefs, would be allowed to refuse service, Spencer said.
Spencer bluntly offered cake makers an alternative: They can quit.

Read more at http://www.wnd.com/2014/05/christian-baker-ordered-to-endorse-same-sex-wedding/#XbLbdFJZUgCCJal8.99
Posted by theodore miraldi at 11:07 AM