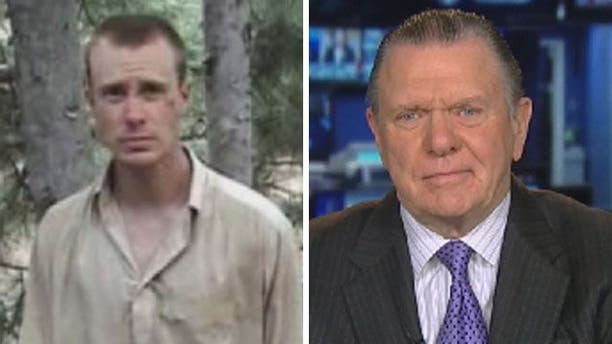 Army Sgt. Bowe Bergdahl, the only American solider held captive in Afghanistan, has been released by the Taliban in exchange for five Afghan detainees, U.S. officials said Saturday.
Bergdahl was held captive for nearly five years, after leaving his base in east Afghanistan on June 30, 2009.
Officials said the detainees were in the U.S. prison at Guantanamo Bay, Cuba, and the deal happened after a week of intense negotiations mediated by the government of Qatar, which will take custody of the Afghans.
“On behalf of the American people, I was honored to call [Bergdahl’s] parents to express our joy that they can expect his safe return, mindful of their courage and sacrifice throughout this ordeal,” President Obama said.
A Defense Department official gave Fox News the names of the detainees: Mohammad Fazl, Mullah Norullah Noori, Mohammed Nabi, Khairullah Khairkhwa, and Abdul Haq Wasiq. There are now 149 detainees remaining at Guantanamo Bay.
Bergdahl, a Hailey, Idaho native, was captured outside his base. However, whether he walked off the base or was captured by the enemy remains unclear.
He is thought to have been captured by members of the Haqqani network, which operates in the Afghanistan-Pakistan border region and has been one of the deadliest threats to U.S. troops in the war.
The announcement of his release comes as the United States winds down its military operation in Afghanistan.
“Sergeant Bergdahl’s recovery is a reminder of America’s unwavering commitment to leave no man or woman in uniform behind on the battlefield,” Obama also said.
Officials said the Taliban turned the 28-year-old Bergdahl over Saturday evening, local time, in Afghanistan. Several dozen U.S. special forces were involved in the exchange, which took place in eastern Afghanistan, near the Pakistani border.
Officials described the transfer as a nonviolent handover between the American forces and about 18 Taliban.
A U.S. official said when Bergdahl was aboard a military helicopter he wrote on a paper plate, because it was too loud to talk,"SF?" -- meaning are you Special Forces?
The operators sitting with Bergdahl responded loudly, saying, yes, we've been looking for you for a long time. Berghdal broke down crying, the official said.
Bergdahl was in good condition and able to walk, according to the officials, who insisted on anonymity in order to describe the details of his release.
Bergdahl is expected to be transferred to Bagram Air Field, the main U.S. base in Afghanistan, then on to the United States.
The Haqqani network, which the State Department designated as a foreign terrorist organization in 2012, claims allegiance to the Afghan Taliban, yet operates with some degree of autonomy.
The five Afghan detainees from Guantanamo were still at the base as of Saturday morning, but were being transferred into the custody of Qatar officials. Under the conditions of their release, the detainees will be banned from traveling outside of Qatar for at least one year.
They are being transferred via a U.S. Air Force C-17 plane.  Based on the terms of the detainees' release, they will be subject to restrictions on their movement and activities.
Officials said Obama spoke with Bergdahl's parents Saturday, shortly after their son had been taken into U.S. custody. Bergdahl's family was in Washington on a previously scheduled visit when they received the news.
“The responsibility to make sure all of our men and women in uniform return from battle, especially those taken prisoner and held during war, is deeply personal to me, as someone who has worn the uniform of my country and as someone who was deeply involved in those efforts with respect to the unfinished business of the war in which I fought." said Secretary of State John Kerry, who with Obama thanked Qatar officials.
http://www.foxnews.com/politics/2014/05/31/wh-us-solider-held-in-afghanistan-bergdahl-is-released-after-five-years/
Posted by theodore miraldi at 2:15 PM