Against Illegal Invasion, Then You Hate Babies and Latinos 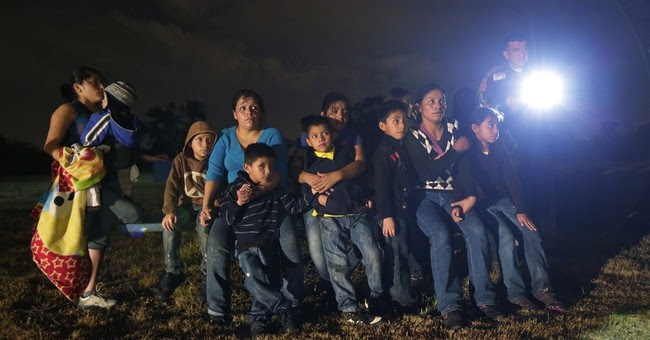 
You gotta love the Left. They sure know how to make the people who don’t drink their Kool-Aid look like el Diablo’s nasty sister.
For instance:
1. If you believe that marriage is a union between a man and a woman, then, according to them, you want to stone Elton John in a caliche pit and feed his gelatinous carcass to buzzards; and then use his cd’s for a heterosexual clay pigeon shoot.
2. If you think folks should have a legit ID before they vote, then you’d probably like to see slavery re-instated and you think Rosa Parks was a carpy wench.
3. If you say, or even think, Muslims were responsible for the attacks on 9/11, then you want to jumpstart a 21st-century Crusade and establish a Global Christian Theocratic, Iron-fisted Rule.
4. If you think chicks like Sandra Fluke should pay for their own damn birth control, then you want to cut off women’s clitorises, chain them to a hot stove and have them spit out babies ‘til they croak from exhaustion.
The beautiful thing about the Left is that they’ve trained the general public, via the public school system for the last four decades, to believe their blather; and thus anyone who disagrees with “them” is deemed by their ubiquitous foot soldiers to be the scourge of the earth.
Which brings me to their latest bunkum they’ve been bantering about, namely, if you aren’t cool with this tsunami of illegals then you must hate babies and Latinos. Yep, you are an infantophobe and a xenophobe and you must repent, you evil spawn of Satan.
Y’know, if it were just a bunch of nursing infants and their milking mamasitasthat are pouring through the mesquite and prickly pear down on the Rio Grande, I might feel a little weird about wanting to send them back to their dreaded casain their suck-ass country. But what I keep seeing, via the images that have slipped through the cracks of the heavily guarded media, is not a bunch of babies. That is, unless of course, the definition of “baby” has changed to include scruffy gangbangers who’re sporting more tats than a Maori warrior.
Another thing that’s difficult to swallow in their heavily invested and publicly foisted fairy tale is, according to law enforcement and white crackers like the “suspicious” Governor Rick Perry, if that is indeed his real name, is that these “poor babies and their mommies” have committed 8000 rapes and 3000 murders in the last five years in Texas alone. So, if we are to believe the Left regarding who’s coming over the border, then that sure is strange behavior for infants and their nursing moms.
http://townhall.com/columnists/douggiles/2014/07/27/if-youre-against-this-illegal-invasion-then-you-hate-babies-and-latinos-n1868718?utm_source=thdaily&utm_medium=email&utm_campaign=nl
Posted by theodore miraldi at 9:18 AM