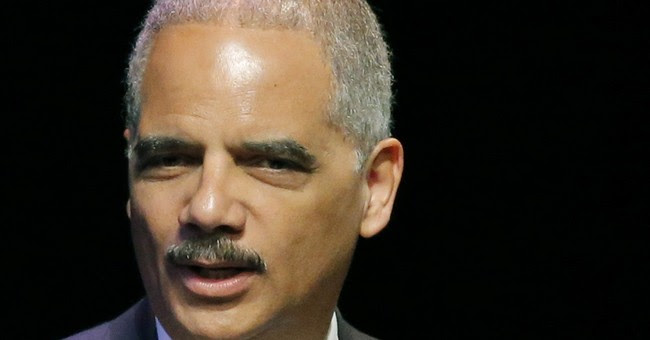 
Forget about that phony IRS scandal… The DOJ apparently has a real problem to handle. The Pennsylvania State Police are being sued by Eric “The Extortionist” Holder for alleged sexual discrimination. No, the Penn police didn’t do anything as egregious as force women to pay for their own birth-control; but apparently it was enough to persuade the DOJ to file a lawsuit. The offense: Women are being held to the same standards as their male counterparts!
Apparently, requiring all candidates to pass the same standard physical fitness test is sexist. See, women are having a tough time passing the test – and this is obviously by design. According to the DOJ lawsuit:
“Through the use of these physical fitness tests, Defendants have engaged in a pattern or practice of employment discrimination against women in [Pennsylvania State Police's] selection process for entry-level trooper positions in violation of Title VII [of the Civil Rights Act of 1964].”
Those chauvinist creeps in Pennsylvania: How dare they expect a woman to be able to do a man’s work! Wait a minute… Is that really the problem here? The DOJ is suing a state police force, because they expect their female cadets to complete the same minimum requirements as men? Whoa. Maybe we should make a separate test for women that treats them as equals. I mean heck, it worked for race relations in Democrat controlled states in the 1960s, right?
So what is this horribly sexist barrier to female employment really look like? Well, there are five components of the physical test. A 300 meter run, sit-ups, push-ups, a 1.5 mile run, and a vertical jump. Roughly 94 percent of male candidates passed. Only about 70 percent of women passed.
Of course, if I suggested that this test was too much for a woman to handle, I’d be labeled a sexist faster than you can say liberal hypocrisy… Yet the Police force in Pennsylvania is being sued because they dare to suggest that, yes indeed, women should be evaluated the same as men.
So, let me get this straight: We’re supposed to treat women the same as men, unless they are incapable of achieving the same results. In that case, we’re apparently supposed to give them a handicap. Well, I guess this explains the two sets of tees on the golf course; but I’m not totally on board with this separate-but-equal mentality when it comes to first responders, law enforcement officers, or even Walmart rent-a-cops.
Aside from Holder’s decision to sue based on the absurdly racist/sexist notion of disparate impact (hang on to your hats – if your gender makes such hanging possible – because we’ll address that in a minute), he has also decided to sue over the police department’s failure to compensate women who fail said physical test. Yeah, that’s right: The DOJ expects Pennsylvania’s state police to paywomen who fail the test. It’s kinda like a consolation prize, but with a W-2 tax form.
The notion of disparate impact (I told you I'd get around to it) is nothing more than a tool for race hustlers to squeeze businesses, governments, and (apparently) police forces into affirmative action. In short: Even if a policy has no intention of discrimination, it can be found to violate the Civil Rights Act if it results in a racially, or sexually, skewed outcome. In other words, if too many women fail to pass the test, the test can be found discriminatory – even though it was never intended as a barrier to allowing women in the force.
But the bigger message here seems to be the mentality of those victim-obsessed hustlers who are currently running the Federal Government. Despite the fact that over 70 percent of female applicants pass the test, Holder and Company have decided to sue. And why?
Well… Because those evil cops in Pennsylvania had the audacity to treat female candidates the same as their male counterparts. Don’t those out of touch, sexist, creeps who run the police department know by now that, in Holder’s America, “equality” means treating everyone differently? See, women are equal. Well, unless they’re not. In which case, we should treat them unequal in order to make them equal. But not too unequal. After all, they are equal… Unless they’re not. Are they? (Please don’t sue me.)
Welcome to our progressive Utopia: Where people get sued for not lowering their expectations.
http://finance.townhall.com/columnists/michaelschaus/2014/07/31/war-on-who-eric-holder-sues-police-dept-for-treating-women-as-equals-n1872737/page/full
Posted by theodore miraldi at 10:35 AM