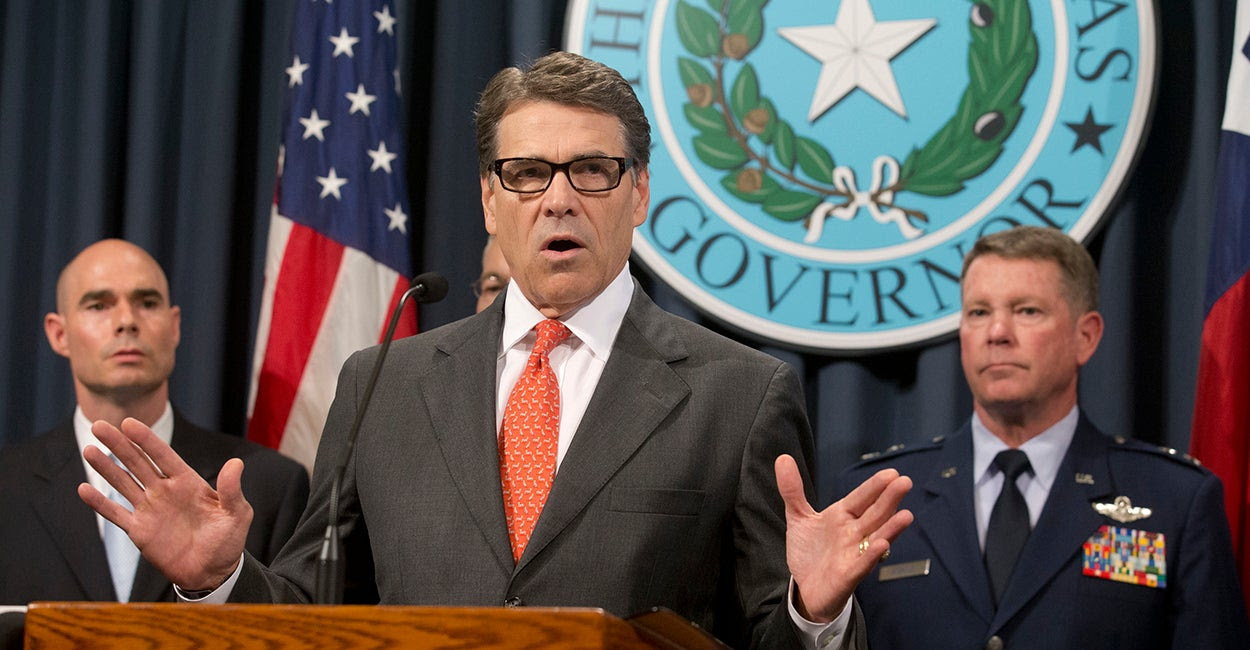 Texas Gov. Rick Perry compares the role of National Guard troops at his state’s border to the deterring effect that cop cars stationed along neighborhood roads have on crime.
Perry, in an exclusive interview with The Daily Signal, said even though the 1,000 military troops he activated to help manage the border crisis in his state will not be authorized to make arrests, the sheer presence of the military will deter illegal activity.
“It’s a powerful reminder that what you are doing is a crime,” said Perry, who has been a critic of the White House’s response to the border crisis. “It’s just like a law enforcement effort in your neighborhood, where you see a parked patrol police car on the corner, and the bad guys see it and don’t commit a crime.”
By announcing plans to deploy the National Guard to the border on his own rather than through the federal government, Perry has the power to order the troops to make arrests and apprehensions.
But Perry, perhaps responding to critics who worry about the troops’ lack of training in immigration law, told The Daily Signal he has decided not to give arrest power to those deployed to Texas’ border with Mexico.
“Their real job is not apprehension,” Perry said. “Border Patrol apprehends.”
National Guard on the Border
In 2006, President George W. Bush sent 6,000 troops to the four border states. They repaired and built fences and roads, and conducted surveillance, among other duties.
Troops in that deployment did not have apprehension and arrest powers.
Troops were similarly limited when President Obama eventually extended that deployment while ordering a second wave of National Guard forces to Texas, California, Arizona and New Mexico in 2010.
With troops’ responsibility likely to be limited again this time, Border Patrol agents who are responsible for apprehending and arresting illegal immigrant crossers argue that the National Guard will make little impact.
Border Patrol union representatives told The Daily Signal last week they worry the troops will interfere with agents’ work.
“What you are doing is a crime,” says @GovernorPerry of illegal immigrants.
Perry, who says he has talked to Border Patrol agents about his decision, believes otherwise.
“They aren’t displacing Border Patrol,” Perry said. “It’ll be just like how we partner with law enforcement. They want to see the border secure, so they won’t resist the assistance. Just the presence and knowledge that they’re deployed will have a powerful message.”
The troops that are due the border next month will actually work side by side with police officers of the Texas Department of Public Safety, not alongside Border Patrol.
The state officers are there as part of Operation Strong Surge, a Perry initiative approved last month that sent state troopers to the border to assist local law enforcement.
Just like the National Guard, state and local law enforcement officers can only defer to the Border Patrol those they suspect have entered the country illegally.
Stopping Smuggler and Criminals
Not including the deployment of the 1,000 troops, Perry said there are already 300 state and National Guard troops at the border for Operation Lone Star, an annual joint military and civil humanitarian medical mission.
“For those who say, ‘This is very out of the ordinary,’ the National Guard being at the border is not an unusual situation,” Perry said. “There’s troops at the border every year and there’s troops there now.”
Can the National Guard help Texas stop the surge of crossings on the border?

Perry hopes the new troops will send a message to drug cartels and other criminal groups that he says have exploited the latest border trend — the surge of Central American children coming across the Rio Grande Valley.

“There has not been as much focus on the drug smugglers and other criminals because of these children,” Perry said. “There’s been an effort by the cartels to distract Border Patrol into taking care of these kids. The danger that this situation presents for ordinary Texans and Americans has not been a focus of the mainstream media.”
Perhaps realizing the threat, President Obama dispatched a team to the border last week to determine whether a federally organized National Guard deployment was necessary.
No matter what Obama decides to do, Perry has said he intends to ask the federal government to pay for his deployment of 1,000 troops, estimated to cost $12 million a month.
Perry, who warned the Obama administration about the border crisis in his state more than two years ago, did not speak with the president’s team while it visited Texas.
“This [the National Guard deployment] is important for the peace of Texas and the country,” Perry said. “I had to make a decision.”
http://dailysignal.com/2014/07/29/exclusive-interview-rick-perry-says-deploying-troops-border-sends-powerful-message/?utm_source=heritagefoundation&utm_medium=email&utm_campaign=morningbell&mkt_tok=3RkMMJWWfF9wsRonuaTPZKXonjHpfsX56u8tUaO1lMI%2F0ER3fOvrPUfGjI4ASMJrI%2BSLDwEYGJlv6SgFQrLBMa1ozrgOWxU%3D
Posted by theodore miraldi at 7:56 AM