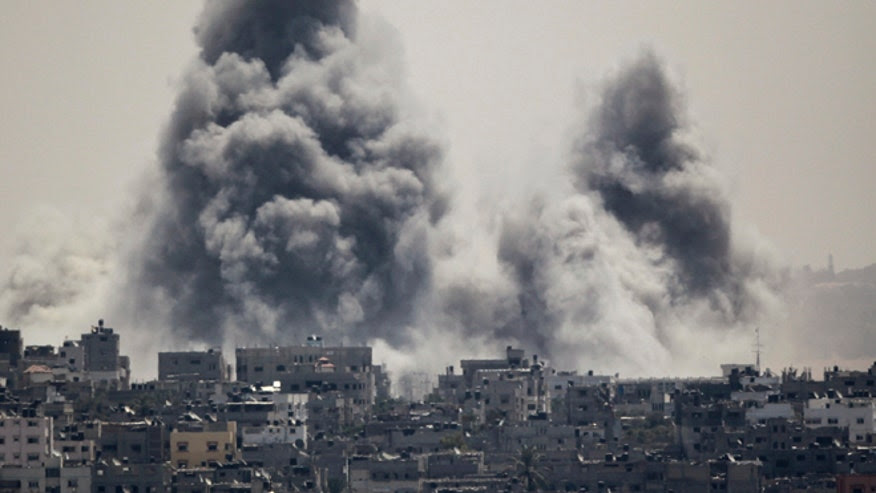 July 27, 2014: Smoke rises during an Israeli offensive in the east of Gaza City. A humanitarian truce in the Gaza Strip collapsed on Sunday after a barrage of rockets fired by Palestinian militants was met with fierce Israeli shelling, in a fresh setback to efforts to secure a permanent ceasefire.AP
Hamas announced Sunday that it has agreed to a 24-hour holiday truce in Gaza, hours after Israel resumed its ground offensive and airstrikes against the militant group for firing a salvo of rockets at the southern part of the country.
The truce began at 7 a.m. ET. Hamas hit back at Israel earlier in the day during a previous 24-hour cease-fire window.
The three-day Eid al-Fitr holiday, which caps the Muslim fasting month of Ramadan, is expected to begin Monday or Tuesday, depending on the sighting of the new moon.
Lt. Col. Peter Lerner, an Israeli army spokesman, did not say if Israel would hold its fire during the time requested by Hamas, but said troops would continue demolishing Hamas military tunnels.
"Due to Hamas' incessant rocket fire during the humanitarian window, we are renewing our aerial, naval, and ground activity in Gaza," an Israel Defense Forces spokesman tweeted earlier Sunday before the new truce was announced. The next tweet read, "The IDF has repeatedly urged the civilian population of Gaza not to approach combat zones."
The Israeli military said about a dozen rockets had been fired from Gaza since midnight Sunday, without causing any reported casualties or damage. Israel's Cabinet had decided to extend the cease-fire for 24 hours, until midnight Monday (5 p.m. ET Sunday), but warned that its military would respond to any fire from Gaza and would continue to demolish cross-border tunnels used by militants to stage attacks.
The rocket fire began late Saturday after Hamas, who have demanded the lifting of an Israeli and Egyptian blockade on the territory and the release of prisoners, refused to extend the truce.
"Once again Hamas is cynically using the people of Gaza as a human shield," Israeli Prime Minister Benjamin Netanyahu's office said in a statement.
Shortly thereafter, clashes erupted between Israeli troops and Gaza militants and the sounds of explosions echoed across the coastal territory. The Islamic Jihad group said one of its field commanders was killed by tank fire near the southern Gaza town of Khan Younis.
Gaza health officials claim that the 20-day offensive has killed more than 1,050 Palestinians, though it is not clear how many were civilians and how many were Hamas militants. Israel has lost 43 soldiers, while two Israeli civilians and a Thai worker were also killed by rocket and mortar attacks from Gaza.
The Hamas rejection of a further lull after fighting was halted for 12 hours Saturday complicated the efforts of U.S. Secretary of State John Kerry and European foreign ministers, who were meeting in Paris in hopes of transforming the cease-fire into a more sustainable truce.
Israel launched its military operation on July 8 and later sent ground forces into Gaza to stop relentless rocket fire and to destroy a sophisticated network of Hamas tunnels that could be used to infiltrate the country.
The military says it is doing its utmost to prevent civilian casualties, including by sending evacuation warnings to residents in targeted areas, and blames Hamas for putting civilians in harm's way.
Hamas and other militants in Gaza have fired more than 2,400 rockets at Israel since hostilities began on July 8, many deep into the Israeli heartland and toward most of the country's major cities. Casualties in the Israeli side have stayed relatively low thanks to Israel's sophisticated Iron Dome missile defense system and because residents have been vigilant about seeking shelter quickly upon hearing the air raid sirens.
Hamas spokesman Sami Abu Zuhri said any truce must include a withdrawal of Israeli forces from Gaza, and that tens of thousands of displaced people must be allowed to return to their homes. Israel's current terms are "not acceptable," he said in a text message to journalists.
Israel's acceptance of the cease-fire extension was premised on its soldiers remaining in Gaza to destroy the more than 30 tunnels the military says it has already found in the densely populated coastal strip. Israel says the tunnels represent a strategic threat because they allow Hamas fighters to carry out attacks on Israeli territory.
The Associated Press contributed to this report.
http://www.foxnews.com/world/2014/07/27/israel-resumes-gaza-offensive-after-rocket-attacks/
Posted by theodore miraldi at 8:35 AM