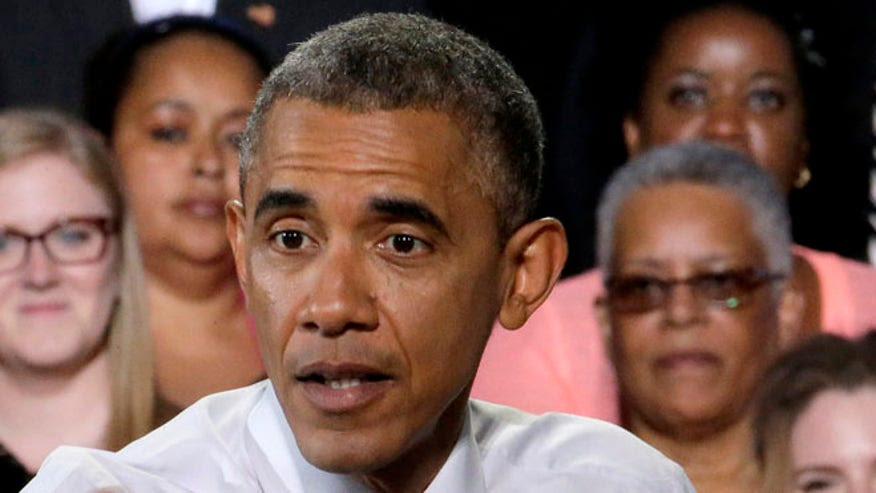 July 30, 2014: President Barack Obama speaks about the economy, , at the Uptown Theater in Kansas City, Mo.
The House on Wednesday approved a highly contentious lawsuit against President Obama over his alleged abuse of executive power, teeing up an election-year legal battle sure to spill onto the midterm campaign trail.
The House backed the lawsuit resolution on a partyline vote of 225-201.
Republicans say the lawsuit is necessary to keep the president in constitutional check, after he allegedly exceeded his authority with unilateral changes to the Affordable Care Act.
Democrats branded the effort a political charade aimed at stirring up GOP voters for this fall's congressional elections. They also said it's an effort by top Republicans to mollify conservatives who want Obama to be impeached -- something House Speaker John Boehner, R-Ohio, said he has no plans to do.
“We have no plans to impeach the president. We have no future plans. Listen, it's all a scam, started by Democrats at the White House,” Boehner said Tuesday.
Republicans said their planned legal action was warranted because, they argue, Obama has violated his constitutional duty to faithfully execute the laws. They say that instead, he has enforced laws as he wants to, dangerously shifting power to the presidency from Congress.
"The people's representatives will not turn a blind eye to the lawlessness of this president," said Rep. Doug Lamborn, R-Colo. "We will do whatever it takes to hold him and future occupants of the Oval Office accountable."
Democrats dismissed the proposed lawsuit as a legally groundless exercise that could end up costing taxpayers millions of dollars in legal fees and other expenses. But they've tried linking the suit to impeachment talk by conservatives like former GOP vice presidential candidate Sarah Palin and turning it into a fundraising device.
Democrats have sent pleas for contributions to their supporters warning that the GOP is out to impeach Obama and ruin his presidency. Using that pitch, Democrats raised $1 million Monday, according to the head of the House Democratic campaign organization, Rep. Steve Israel, D-N.Y.
The lawsuit will focus on how Obama has carried out his health care overhaul.
Republicans say Obama has illegally changed the law using executive actions. The White House and Democrats say he's acted legally and within the latitude he's empowered to use as chief executive.
In particular, Republicans have objected that Obama has twice delayed the law's so-called employer mandate, which he did under pressure from business groups. The provision requires companies with 50 or more employees working at least 30 hours weekly to offer health care coverage or pay fines, while businesses with fewer than 50 workers are exempt.
The requirement was initially to take effect this year. Now, companies with 50 to 99 employees have until 2016 to comply, while bigger companies have until next year.
Republicans say there are other examples of Obama exceeding his powers. These include failing to notify Congress in advance when he traded five Taliban members held at the prison at Guantanamo Bay, Cuba, for the captive Army Sergeant Bowe Bergdahl, and unilaterally preventing the deportation of some children who illegally immigrated to the U.S.
They also point to Obama's comments in January that 2014 would be a "year of action" to implement his priorities, which he said he would do "with or without Congress" by using his "pen and the phone."
"Such a shift in power should alarm members of both political parties because it threatens the very institution of the Congress," said a GOP-written report accompanying the legislation.
The Associated Press contributed to this report.
http://www.foxnews.com/politics/2014/07/30/house-approves-lawsuit-against-obama-over-alleged-abuse-executive-power/
Posted by theodore miraldi at 6:50 PM