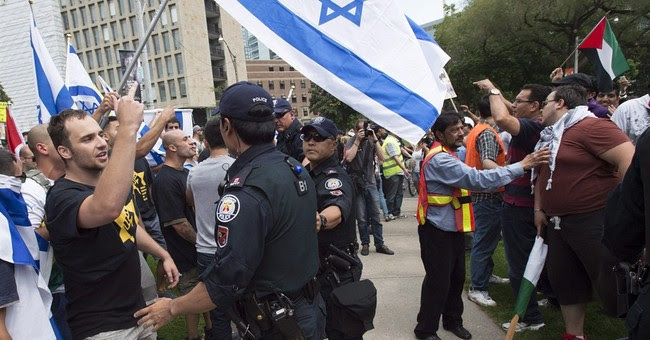 
Israel is not tame.
But she is good.
If a poacher shoots arrows at a pride of sleeping lions, are the lions to blame for rousing and defending themselves?
What does one say of the shooter when he intentionally cowers behind the skirts of his own women and daughters, hoping, indeed praying, that these precious souls will inadvertently perish as a result?
One calls him a coward, a fool and a monster.
Such are the men of Hamas, Hezbollah and the Palestinian Authority – terrorists all. They are purposefully slaughtering their own citizenry.
There are but two things to blame for the tragic loss of life in both Gaza and Tel Aviv: Islam in general, and Hamas in particular. There is no moral equivalency in this raging Gaza conflict.
There is only good and evil.
Israel, though not perfect, is good. Hamas is evil. Israel loves life. Hamas loves death.
But don’t take my word for it. As recently as 2008, Hamas MP Fathi Hamad, addressing the Jewish people, betrayed Islam’s empirically wicked stratagem when he proclaimed, “We desire death more than you desire life.”
“Death for the Palestinian people,” said Hamad, “has become an industry, which the women excel at along with everyone else on this earth. The elderly excel at it, the jihadist fighters excel at it, and the children excel at it.
“Therefore they [the Palestinian Authority] created a human shield of women, children, elderly and jihadists to confront the Zionist bombardment machine, to say to the Zionist enemy: ‘We desire death just as you desire life.’”
Hezbollah leader Hassan Nasrallah concurs: “We are going to win, because they love life and we love death.”
And so innocent men, women and children, Israeli and Palestinian alike, become the victims of this Islamic culture of death.
These are the victims of Hamas.
Recently, Israeli Prime Minister Benjamin Netanyahu captured concisely this tragic phenomenon: “We are using missile defense to protect our civilians, and they’re using their civilians to protect their missiles.”
Yet all the while today’s blathering, anti-Semitic axis-of-the-willfully-blind – the liberal intelligentsia, rank-and-file “progressives” and that elusive creature: the “moderate Muslim” – inexplicably, if not unwittingly, rally behind the principal Islamic cause: Death to the infidels (Quran 9.5).
“Free occupied Palestine!” they drone, while either disregarding the long history of deadly Arab aggression in the region, or laboring under thick ignorance of it.
By “occupied Palestine,” of course, Arabs and Arab sympathizers reference that portion of Israel achieved as spoils of her defensive Six Day War. In June of 1967, the tiny Jewish nation devastated the armies of neighboring Syria, Jordan and Egypt as the warring nations characteristically made ready to “wipe Israel from the map.”
By seizing the Sinai Peninsula, the Gaza Strip, the Old City of Jerusalem, the Golan Heights and the West Bank of the Jordan River, Israel had gained a defensive stronghold in the region crucial to her very survival. Still, many of these territories remained very much occupied, and do to this day, by thousands of Arabs who now fall under Israeli governance.
Herein lies the struggle.
So, in truth, Israel no more occupies this fictional “Palestine” than do Californians “occupy” Sacramento.
Yet imagine the Mexican government launching dozens of rockets each day, for years, into Los Angeles neighborhoods, intentionally targeting innocent American citizens.
Or visualize a Mexican suicide bomber with full government authority strolling into a crowded Chuck E. Cheese’s in suburban Bakersfield and ripping himself and dozens of women and children to shreds.
Picture, if you will, a quiet, unassuming woman cleverly disguised as an expectant mother boarding a San Francisco trolley and blowing it up along with scores of innocent passengers.
Do you not think the international community would forcefully condemn such horrific acts of terror? Do you not think America would respond with that level of force necessary to eliminate the threat? Would she not have an absolute right – indeed an absolute duty to do so?
Of course she would.
For the innocent Palestinian, Israel is a friend while Hamas is a foe. Indeed, what does it say that the most liberated Arabs in the Middle East live, and thrive, in Israel?
Speaking before the Knesset in 2006, Prime Minister Netanyahu captured, in two brief sentences, that which lies at the heart of the ongoing, centuries-old Arab-Israeli conflict: “The truth is that if Israel were to put down its arms, there would be no more Israel. If the Arabs were to put down their arms, there would be no more war.”
Inexplicably, many in the West – people Vladimir Lenin might have called “useful idiots” (i.e., the aforementioned “progressives,” mainstream media and “moderate” Muslims) – willfully suspend disbelief. They play directly into the blood-soaked hands of these terrorist cowards.
Having time and again demonstrated a willingness to sacrifice their own innocent people (consider child suicide bombers), these monsters today both deliberately target Israeli neighborhoods with rockets and intentionally place their own military launch sites and terrorist headquarters next to mosques, shelters, playgrounds, factories and the like.
This, as intended, has created a propagandist boon. Much of the world blames Israel when these human shields are tragically killed during pinpoint military strikes. Who needs missile defense when you have women and children to hide behind?
To both the Israeli and the Arab victims of Islam, I say this: You are in our thoughts and our prayers. Our hearts break with you. Our hearts break for you. We pray that God will cover and protect you during these dark days and nights.
Because, as former Israeli Prime Minister Golda Meir once said, “Peace will come to the Middle East when the Arabs love their children more than they hate us.”
But, alas, the hate burns hot.
And so peace abates.
http://townhall.com/columnists/mattbarber/2014/07/28/israel-the-palestinian-peoples-greatest-ally-n1869815/page/full
Posted by theodore miraldi at 11:21 AM