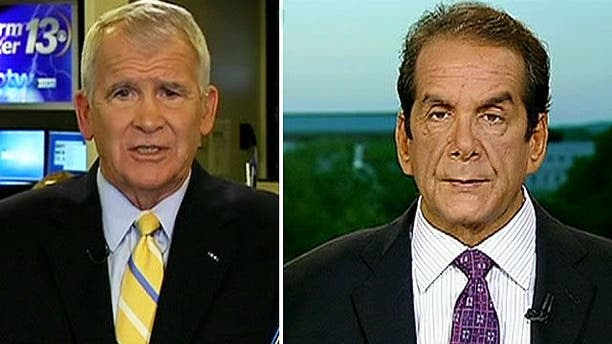 By Oliver North
Last week, before a Russian-made surface to air missile shot down Malaysian Airlines Flight 17 over eastern Ukraine and before Israel began ground combat operations against Hamas in Gaza, Fox News correspondent Ed Henry asked White House spokesman Josh Ernest for his reaction to “the notion that the president is a bystander” to a cascade of crises at home and abroad. The response was stunning: “…there have been a number of situations in which you’ve seen this administration intervene in a meaningful way that has… substantially improved, you know, the tranquility of the global community.”
“Tranquility?” What are the people at this White House thinking? Do they think we’re stupid? The new normal isn’t tranquility. It’s terror.
The surface-to-air missile that brought down a Boeing 777 with 298 souls aboard last week was not only made in Russia – it is all but certain to have been fired by Russian military personnel. The Būk anti-aircraft weapon system is far too complex to be operated by the “separatist militia” in eastern Ukraine.

An American president who “leads from behind” is frightening enough. But an American President who’s AWOL; who runs off to political fundraisers, golf outings, pool halls and photo ops with cronies every time there is a crisis isn’t just troubling. It’s terrifying

While those who launched the missile at MH-Flight 17 may have thought the aircraft was a Ukrainian military transport when they first acquired the “target” – that’s hardly an excuse for Vladimir Putin’s decision to put the Būk transporter-erector-launcher in Ukrainian territory. Doing so was intended to terrify the government in Kiev – and the people of Ukraine. In short, it was a cold-blooded act of terror.
So was the Hamas terror kidnap and murder of three teenaged Israeli boys enroute home from school on June 12. In the aftermath, Prime Minister Benjamin Netanyahu declared the perpetrators would be brought to justice. But then, on June 17, a sixteen-year old Palestinian teen was kidnapped and murdered in a suspected revenge attack. Sadly, the so-called mainstream media in the U.S. and Europe all but ignored the subsequent arrest and indictment of three Israelis for perpetrating the second crime.
Pursuing the rule of law doesn’t win any friends for Israel. Within hours, volleys of Iranian-made rockets and heavy mortar rounds were being launched from Gaza at Israeli communities, homes and schools.
Mercifully, many of the wildly inaccurate but lethal projectiles are brought down by the Iron Dome system before they hit their intended targets. But when Israel responded to continuing Hamas attacks with airstrikes – and then commenced ground combat operations to take out Hamas arsenals, rocket launch sites and tunnels constructed with UN provided concrete and building materials the so-called mainstream media went into high dudgeon.
Obama administration spokesmen at the White House and State Department continue to say, “We respect Israel’s inherent right of self defense.” But they hasten to add: “We urge all parties to exercise restraint,” and “We are increasingly concerned at the extent of civilian casualties.”
For others, the reaction to Israel exercising its “right of self-defense” has been downright threatening.
Turkey’s Prime Minister, Recep Tayiip Erdogan, a member of the Muslim Brotherhood, says “Israel has been performing genocide every day.” Notably, the ayatollahs in Tehran, the Erdogan government in Turkey and the al-Thani dynasty in Qatar appear the world’s best friends for Hamas terrorists. The three governments are united in pledging “steadfast support for the Palestinian cause” – meaning Hamas terror aimed at killing Israeli civilians.
On Monday, Secretary of State John Kerry went to Cairo with the objective of brokering “an immediate cessation of hostilities.” Apparently our vaunted diplomats failed to inform the Secretary that Israel has already agreed to three such ceasefires – all of which were rejected by Hamas. Before meeting with the “Kerry Team” Egyptian President Abdel Fattah el-Sisi, no friend of Hamas or the Muslim Brotherhood, had the Secretary’s party pass through metal detectors. An Egyptian security official, speaking anonymously of this unprecedented affront said, “It’s a matter of trust.”
Unfortunately, it’s not just leaders in the Middle East who don’t trust or respect us. Our southern neighbors continue to send tens of thousands of unaccompanied children illegally across the U.S.-Mexico border. The Canadian government – our first ally in the fight against terror on 9-11-01 – is outraged the O-Team has managed to scuttle the XL Pipeline. Meanwhile, Venezuela, Nicaragua and Cuba have all announced they want Russian military visits and even “exercises.”
The Chinese communists in Beijing are laying claim to territory long considered belonging to the Philippines, Taiwan, the Republic of Korea and Japan. Iraq is an unmitigated disaster. Syria, Libya, Yemen, Sudan, Nigeria and Somalia are being destroyed by civil wars. Afghanistan, facing abandonment by the West, is increasingly chaotic. Lebanon, once the multi-sectarian “Pearl of the Levant,” is now run by Hezbollah terrorists as a satrap for Iran. And in Tehran – the ayatollahs export terror while they work with the brutal regime in Pyongyang, North Korea to build nuclear weapons and the means of delivering them.
American presidents have traditionally built alliances – even friendships with foreign leaders. Think of FDR and Churchill; JFK and Germany’s Konrad Adenauer; Reagan and Thatcher; George W. Bush and Tony Blair. In this increasingly dangerous world is there any such relationship with Obama that’s better today than it was five and one half years ago?
Last Friday, after the Russians shot down Malaysia Airlines Flight 17, Hamas warned the world that it was targeting Israel’s Ben-Gurion International airport.
On Tuesday, shortly after our Federal Aviation Administration announced no U.S. airlines will be allowed to fly into Israel’s Ben-Gurion airport because “a Hamas rocket struck nearby,” our “Tranquility President” headed off on a multi-day series of “West Coast Political Fundraisers.” If his published schedule is accurate, he didn’t even bother to receive a national security brief before departing – something that used to begin every president’s day.
An American president who “leads from behind” is frightening enough. But an American President who’s AWOL; who runs off to political fundraisers, golf outings, pool halls and photo ops with cronies every time there is a crisis isn’t just troubling. It’s terrifying – and that’s the new normal.
http://www.foxnews.com/opinion/2014/07/23/memo-to-obama-white-house-new-normal-isnt-tranquility-its-terror/?cmpid=NL_morninghl
Posted by theodore miraldi at 10:43 AM