Moral Clarity at the Border 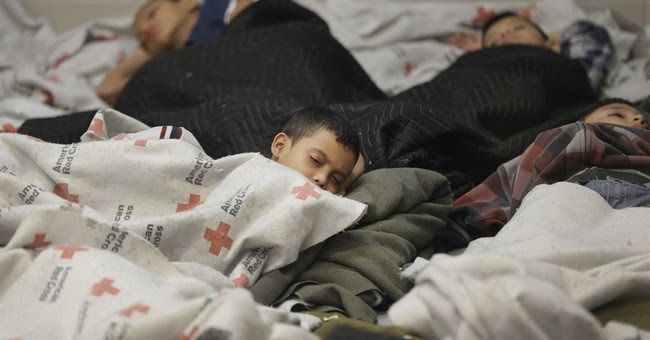 They have gone to our southern border and seen what is not just a national security problem, but a humanitarian crisis. Ronnie Floyd notes that the Southern Baptist National Disaster Relief Ministry is no longer permitted to assist those who have come over the border. The Department of Health and Human Services is now only letting federal contractors come into contact with the children. I hope these kids fair better with HHS than the millions of Americans trying to navigate Obamacare.
SBC President Floyd and Dr. Moore have seen up close and personal the kids "as young as seven years of age" streaming across the border. Dr. Moore has made clear that, "As Christians, we don't have to agree on all the details of public policy to agree that our response ought to be, first, one of compassion for those penned up in detention centers on the border." He is correct.
The author of Hebrews wrote in 13:2, "Do not neglect to show hospitality to strangers, for thereby some have entertained angels unawares." Christians, indeed all Americans, should show compassion to these children who have been put in this situation by their parents often out of a desire for the children's safety or well being.
Ronnie Floyd and Russell Moore have given needed moral clarity to a murky situation. Christians should show sympathy and want to provide private Christian charity to these children. The very hostile reaction some Christians are having to folks such as Russell Moore, Ronnie Floyd, talk hosts Glenn Beck and Dana Loesch, and others is shocking. They are being accused of helping criminals. The good Samaritan never asked for papers before rendering assistance. Chuck Colson started a prison ministry to minister to lawbreakers. Christianity does not stop at the border. Christian charity should not start with a passport check.
Concurrently, the many evangelicals who are providing assistance at the border should not rush forward and muddy the moral clarity with opposition to proposals to close our border, ensure the expeditious reunion with families south of us, end the deferred action for child arrivals ("DACA") program and bring this crisis to closure. A number of mainline Christian denominations are attempting to do that even now with requests that Congress and the administration not deport and not take the steps needed to ensure this crisis starts.
St. Paul wrote in Romans 13:1. "Let every person be subject to the governing authorities. For there is no authority except from God, and those that exist have been instituted by God." We are a nation of laws. But first, we are a nation. That nation has borders. Those borders must be respected. Those crossing over show no respect for our borders. "Be subject for the Lord's sake to every human institution," Peter wrote at 1 Peter 2:13.
This border crisis highlights a longing for what our nation represents for many, but also, for others not featured in the sympathetic press, an opportunity for crime and other issues. Christians should show compassion, but we should also respect the law and want others to respect the law and our institutions.


Christians should provide for those in need. Christians should comfort the poor and the refugee. As a nation, we should be ending incentives for the perpetuation of this crisis through both rapid repatriation and rapid closing of the border. Jesus said in Matthew 19:13-14, "Let the little children come to me, and do not hinder them." America is not Jesus. Even upon the arrival of the new Heaven, the new Jerusalem will have a wall. Its gates may never shut, but gates and wall there will remain.
http://townhall.com/columnists/erickerickson/2014/07/25/moral-clarity-at-the-border-n1865536/page/full
Posted by theodore miraldi at 7:08 AM