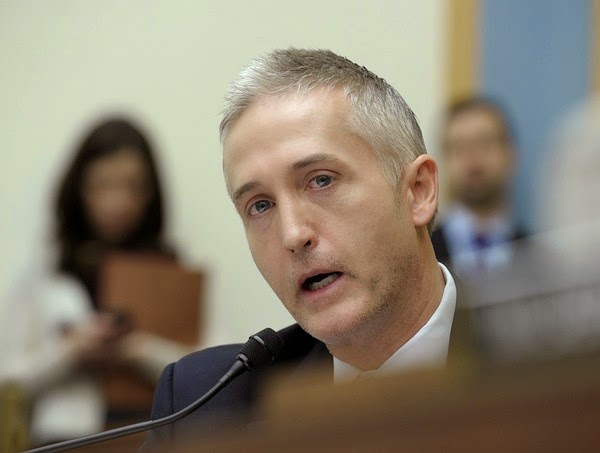 Pete Kasperowicz
Rep. Trey Gowdy (R-S.C.) on Wednesday slammed IRS Commissioner John Koskinen for failing to help answer questions about Congress’s investigation into the IRS targeting scandal, and instead arguing that he can’t do anything while the Inspector General’s investigation into the IRS is ongoing.
Koskinen appeared before the House Oversight and Government Reform Committee, where he said several times that he was unable to help answer some of Congress’s questions because of the IG investigation. But Gowdy said there are no rules prohibiting Koskinen from helping more.
“I find this confounding,” Gowdy said. “I find it vexing, that once the IG is involved, nobody else can do anything. That is not supported by the law.”
Koskinen said it’s his personal view that he should not interfere with the IG once it starts an investigation. “Our policy is… that if the IG starts an investigation, the agency will not themselves run a competing investigation to try to get there first,” he said.
Gowdy offered an alternative theory, that officials cite IG investigations as a barrier to helping when it suits them.
“You can certainly understand how a cynic might view it that way, right, because there’s nothing about an ongoing IG investigation that would keep you from doing your job,” he said. “Just like there’s nothing about an ongoing IG investigation that keeps the Department of Justice from a criminal investigation, or a committee of Congress from a congressional investigation.”
Koskinen said he believes it would be “very difficult” not to interfere with the IG’s examination. Gowdy replied by saying the IG cannot run criminal investigations, which means the IRS should be able to continue helping in some areas.
Koskinen said the IG can do criminal investigations. But Gowdy rejected that and said Koskinen’s comments are another example of him getting wrong information from his own department — for the last few weeks, the GOP has said various IRS officials have told Congress different stories about how the IRS responded to Congress’s investigation.
“So my advice is to be very careful who you take your advice from,” Gowdy said.
http://www.theblaze.com/blog/2014/07/23/watch-rep-gowdy-slams-irs-commissioner-for-dragging-feet-on-congressional-investigation/
Posted by theodore miraldi at 3:34 PM