Called 'credible,' Broaddrick's allegation may play a political role in 2016

Juanita Broaddrick, a former nursing-home operator and volunteer in one of Bill Clinton’s early political campaigns, was dubbed Jane Doe No. 5 by investigators for Kenneth Starr’s impeachment report to Congress regarding Clinton’s alleged crimes.

Contacted as part of the Paula Jones case, she initially denied Clinton made any unwelcome sexual advances, but later she claimed she was raped in 1978 by the then-Arkansas attorney general.
Her story was revealed in 1998, when Clinton, now a senior Democratic Party statesman, was president of the United States.
But even incidents from long ago become pertinent when the occupancy of the Oval Office is at stake, and Clinton actually could return to the White House as the first spouse. Hillary Clinton is widely expected to announce her candidacy for the 2016 Democratic Party nomination.
The fact that Democrats during the last election cycle ripped into a GOP candidate over the wording he used regarding sexual assault also makes Broaddrick’s story relevant now.
It was then-Rep. Todd Akin, R-Mo., a U.S. Senate candidate in 2012, who made an awkward statement about rape. The resulting furor created by both Democrats and fellow Republicans left him on the losing end of that election.
Asked in a local television interview in 2012 whether he would support abortion in the case of rape, Akin made the following statement, which led to a firestorm of criticism, denunciation and ridicule by many, even in his own party, including presidential candidate Mitt Romney: “If it’s a legitimate rape, the female body has ways to try to shut that whole thing down. But let’s assume that maybe that didn’t work or something. You know, I think there should be some punishment, but the punishment ought to be on the rapist and not attacking the child.”
While WND has reported that two new fertility studies conclude that stress in males and females inhibits pregnancy, the media still have not linked the results to Akin’s comments.
Akin has written about his experience in “Firing Back: Taking on the Party Bosses and Media Elite to Protect Our Faith and Freedom” and in a recent commentary said: “When asked to comment about my instantly infamous ‘legitimate rape’ comment in my new book, ‘Firing Back,’ I describe what Republican presidential candidate Mitt Romney should have said: ‘A credibly accused rapist is giving the keynote speech at the Democratic convention in two weeks, and you want me to denounce a decent, God-fearing man for his inelegant comments about rape? No, not happening, and if the truth hurts, put some ice on it.’”
He pointed out that Broaddrick made a “highly credible” claim under oath that Clinton raped her when he was attorney general in Arkansas.
“It was a real panicky, panicky situation,” Broaddrick told Lisa Myers on NBC’s “Dateline” in February 1999. “I was even to the point where I was getting very noisy, you know, yelling to ‘Please stop.’ And that’s when he pressed down on my right shoulder and he would bite my lip.”
Wrote Akin: “On the way out of the room, when Clinton saw her swollen lip, he famously said, ‘Put some ice on that.’ It was Broaddrick’s testimony under oath in the Paula Jones investigation that persuaded a few key congressmen to proceed with impeachment proceedings against Clinton.”
Get your copy of “Firing Back”
Akin suggested there’s a difference between someone making an awkward statement about sexual assault and someone being accused of the act.
But to this day, there are Clinton defenders in the media who are covering for him.
Akin pointed out that Politico reporters Anna Palmer and Tarini Parti selectively cited a line in his book about Clinton, removing the description “a credibly accused rapist” in their July 10 article, “Todd Akin returns to national stage.”
The line read only: “[Bill Clinton] is giving the keynote speech at the Democratic convention in two weeks.”
Akin said that by removing the phrase ‘a credibly accused rapist,’ they not only stripped the logic from the quote … but they also denied legitimacy to at least one solid rape accusation against Clinton.” 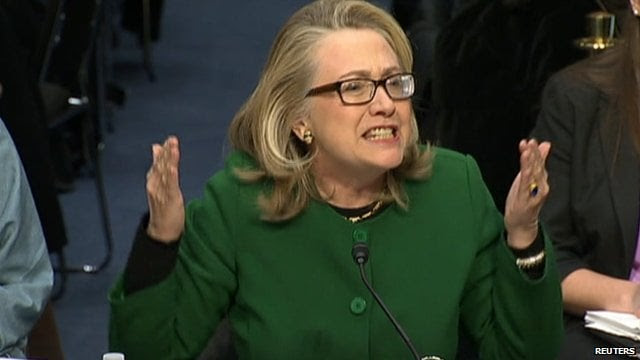 Former Secretary of State Hillary Clinton
Broaddrick, who appeared with Sean Hannity on Fox News, among other programs, to state her allegation about Clinton, described meeting with Clinton in her hotel room.
She said Clinton “held her down forcibly on a bed and bit her lips while engaging in sexual intercourse,” according to records.
Broaddrick also told the story to the Wall Street Journal in 1999, drawing a denial from Clinton’s attorneys.
She told NBC she considered coming forward earlier, after Kathleen E. Willey accused the president of groping her in the Oval Office. But, she said, “I just wasn’t brave enough to do it.”
According to reports in the Washington Post at the time, Broaddrick said Clinton “turned me around and started kissing me, and that was a real shock.”
“I first pushed him away. I just told him ‘no.’ …. He tries to kiss me again. He starts biting my lip. … And then he forced me down on the bed. I just was very frightened. I tried to get away from him. I told him ‘no.’ … He wouldn’t listen to me.”
Asked in an interview then how she felt about Clinton, she said, “My hatred for him is overwhelming.” 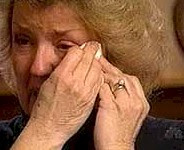 She reported then she was not pursuing a book deal or lawsuit, but she was tired “of everybody putting their own spin on it.”
WND reported at the time that the encounter happened in Little Rock when Broaddrick was at a nursing home seminar and called campaign headquarters to set up a meeting with Clinton.
Clinton recommended they adjourn to her room for coffee, and it was there, she said, he forced himself on her.
She explained why she didn’t make a formal complaint.
“Because of the mentality of the ’70s. There I was, I was married, I was also in a relationship with another man, and … I was there alone in a hotel room with the attorney general, and I didn’t think anyone would possibly believe me,” she said at the time.
A decade ago, WND published an excerpt from Candice Jackson’s book, “Their Lives: The Women Targeted by the Clinton Machine,”
The book documents how a friend of Broaddrick’s went to her room and found her lip and mouth badly swollen and her pantyhose ripped off. The friend said Broaddrick told her she had been sexually assaulted by Clinton.

Read more at http://www.wnd.com/2014/07/rape-claim-against-clinton-gaining-attention-again/#Tzc8YtQ44vSiq86g.99
Posted by theodore miraldi at 8:55 AM