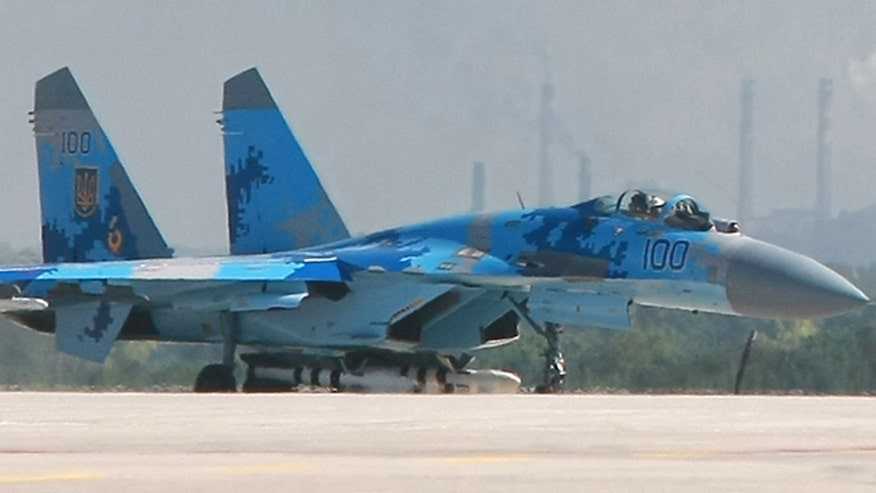 
DONETSK, Ukraine –  Two Ukrainian military fighter jets were reportedly shot down over the nation’s contested eastern region on Wednesday, even as U.S. and Ukrainian sources said Russian weaponry has been pouring in to separatists following the downing of a Malaysian passenger plane last week.
The Ukrainian Defense Ministry said two Sukhoi-25 fighters were shot down Wednesday afternoon over an area called Savur Mogila. The planes may have been carrying up to two crew members each, according to Defense Ministry spokesman Oleksiy Dmitrashkovsky.
The pilots ejected from the plane but it is not known if they survived, Fox News confirms. A search party is out looking for them.
Reuters reported that Kiev blamed the latest incident on pro-Russian separatists, who are suspected of downing Malaysia Airlines Flight 17 last Thursday, killing all 298 aboard. Although Russia has denied supplying the ethnic Russian separatists with sophisticated Buk surface-to-air missile batteries, the kind suspected of bringing down MH-17, Ukrainian defense officials say heavy weaponry is flowing into the Donetsk region that the separatists now control.
More than a dozen Russian-made multiple launch rocket systems crossed the Ukrainian-Russian border on Tuesday, according to Andriy Lysenko, the spokesman for the information center of the National Security and Defense Council. Those weapons are artillery, and built for shelling land-based targets.
The spokesman said that Russia in recent days had started supplying more sophisticated weapons to militants in eastern Ukraine, in particular, modified Grad systems.
The Grad is a mobile battery mounted on truck fitted with a bank of 40 launch tubes that can be turned away from the unprotected cab. The number of rockets that each vehicle is able to quickly bring to bear on an enemy target makes it effective, especially at shorter ranges. The system has lower precision than classical artillery and cannot be used in situations that call for pinpoint precision.
"Some 14 Grad systems today have crossed the state border. We have documented this and passed the information on to Ukraine's National Security and Defense Council,” Lysenko said.
A U.S. senior intelligence official confirmed that pro-Russian separatists are getting air defense training at a Russian training facility in Rostov, near the Ukraine border, though the official cautioned that it is still not clear who had their finger on the trigger when MH-17 was downed. Significantly, since the shoot down, the senior intelligence official said the Russians have continued to aid the pro-Russian rebels by sending tanks and rocket launchers. The official said the Russians have been deliberately providing equipment to the rebels which is also used by the Ukrainians for plausible deniability.
Lysenko added that Ukrainian servicemen had taken control of several cities occupied by separatists in eastern Ukraine and seized vehicles, ammunition and small weapons. Lysenko said the arsenal has not only Russian markings, but also the relevant documentation.
"You can see the Russian tank T-64 BV, which is not in the records of the Ukrainian Armed Forces. Servicemen seized it during the terrorists' assault on a Ukrainian military unit in Artemivsk,” he said. “Now you see an APC-80, which is also a Russian-made vehicle. These are the accompanying operational documents. There is an official seal of the Russian Federation and a note explaining that this APC was put in commission and it that was received to be used in combat operations."
Moscow, meanwhile, denied supplying military equipment to Russian fighters, who have clashed with Kiev following the Russia's annexation of Crimea in March.
On Monday, Ukrainian officials charged Russian experts were present at the crash site of the Malaysian airliner. U.S. intelligence officials believe the Boeing 777 was likely shot down by a Russian surface-to-air missile in the possession of Kremlin-backed fighters.
“We have confirmed there were Russian military experts disguised as civilians were at the crash site,” Ukrainian Presidential Administration deputy chief Hennadiy Zubko said on July 21 during an interview on Channel 5 TV.
Zubko said Ukrainian emergency workers were initially denied access to site, which is located in an area of eastern Ukraine controlled by Kremlin-backed forces. Zubko said some 350 employees of Ukraine's Emergency Ministry eventually were allowed access to the area, where they recovered 282 bodies and 87 body parts. The remains arrived on July 22 in Kharkiv, from where they will be flown to Holland for identification.
Michael Bociurkiw, a spokesman for the Organization for Security and Cooperation in Europe, on July 22 said in Kiev that wreckage from the downed plane had been “significantly altered.” international monitors told ABC News today, as remains of the victims arrived in territory held by  Bociurkiw said pieces of the front of the plane's cockpit appeared to have been cut away by power tools.


Fox News Channel's Catherine Herridge and Steve Harrigan contributed to this report
http://www.foxnews.com/world/2014/07/23/2-ukrainian-military-fighter-jets-shot-down-in-eastern-ukraine/?cmpid=NL_morninghl
Posted by theodore miraldi at 9:40 AM