What if Obama Defended American Business? 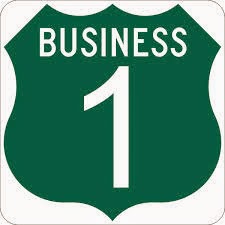 Just for once, wouldn't it be great if President Obama actually defended American business, instead of attacking it?

Just once?
Wouldn't it be great if Obama acknowledged that U.S. firms are overburdened by the highest corporate tax rate among developed countries, and as a result are becoming less and less competitive?
Wouldn't it be great if he said he wants to fix this tax imbalance in order to grow the economy faster and give U.S. businesses a leg up on the global scene?
Couldn't he just say that?
He could say it like this: "Look, I don't want to drive businesses away. I want to keep businesses here. I understand the importance of business. I understand that you can't have a good job without a thriving business. And I get that businesses require capital investment. And I understand that the investment and the business must have a high rate of return, after tax. When that's the case, the company expands, jobs grow and families have more income to pay for health care, education and the good life."
Instead, Obama mocks businesses. And now he's hauling out an election-year populist whine about "economic patriotism." He's attacking companies that merge with foreign businesses and reincorporate in lower-tax foreign countries. It's called inversion. And Obama wants to stop it in the name of patriotism.
In an interview with my CNBC colleague Steve Liesman, Obama talked about how businesses are ungrateful for "the range of benefits that have helped to build companies, create value (and) create profits." He complained that these firms are moving their "technical address simply to avoid paying taxes."
That sounds a bit like, "If you've got a business -- you didn't build that. Somebody else made that happen."
But the issue isn't avoiding all taxes. If a U.S. business reincorporates overseas, it still pays the same record-breaking 35 percent tax rate on its U.S. income. The difference is that it doesn't pay 35 percent on profits made in foreign countries. That's the double tax it is trying to avoid.
We are the only nation that has this goofy system. And it reduces after-tax profits and renders our companies less competitive. That's why nearly $2 trillion in cash from American companies is sitting overseas.
But Obama could turn this around in a blink. He could say, "We need that cash to grow the economy, create more jobs and, yes, to build more infrastructure. So I'm going to grant a small repatriation fee of 5 percent to bring that money back and put it to work at home."
He could then say, "And to make American business number one, we're gonna drop the corporate tax rate from 35 percent to 20 percent -- with full cash expensing for new investment -- and scrap all other deductions and special credits. In other words, we're gonna end crony capitalism and corporate welfare, just as I pledged in my 2008 campaign. And that includes the Export-Import bank. "
He could then say he understands from numerous studies that 70 percent of the benefits of a corporate tax cut will flow to working wage earners while the rest will flow to lower-priced consumers. And he could add that we're going to allow pass-through S-corps and LLCs who now pay the personal tax rate to reincorporate and take advantage of the new lower C-corp rates.
And that's when he could argue that American companies must come home and stay home.
Nobody, including myself, likes the idea of foreign-based inversions or foreign-parked cash. But corporate tax reform is the solution, not corporate punishment.
The president sometimes gives lip service to corporate tax reform. But he never follows through. There have been a dozen good proposals down through the years. But Obama keeps blaming Republicans in Congress, even though he has been completely disengaged from any serious talks about tax reform.
Five years ago, Simpson-Bowles had a good corporate tax reform. The president ignored it. Democratic Sen. Max Baucus developed a corporate tax-reform package when he was chair of the Senate Finance Committee. It was completely disregarded by the White House. And Republican Dave Camp, chairman of the Ways and Means Committee, delivered a comprehensive tax reform that included corporations. It wasn't perfect, but the White House overlooked that too.
And now it looks like corporate tax reform is dead again this year. The Obama Democrats will try to push through a bill to stop foreign re-incorporations. It will never pass. And they'll keep trashing business and turning up the flame on the class-warfare burner. Divide the country and bash success. The same old tired themes.
It's a pity. Why isn't it patriotic to stand by large and small businesses, which are at the heart of the American free-market economy? Just this once, can't we get the story right?
http://finance.townhall.com/columnists/larrykudlow/2014/07/27/what-if-obama-defended-american-business-n1866986/page/full
Posted by theodore miraldi at 9:32 AM