Why would Hamas negotiate with John Kerry after getting $47 million from him? 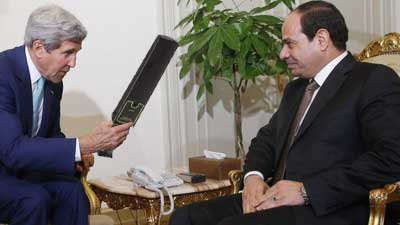 Viet Nam Swift Boater, Secretary of State, big brave John Kerry defied a Federal Aviation Administration ban by flying into into Israel’s main airport Wednesday. TEL AVIV, Israel (CBS News/CBSDC/AP)  Some called it a sign of “sheer”  will to achieve a cease-fire agreement in the warring Gaza Strip.  Others, who called it so much hooey, remembered that the previous Secretary of State Hillary Clinton at least underwent “sniper fire” when landing in Bosnia.
Who would fire on John Kerry in Israel?  Not likely Hamas to whom he had showered on Monday with $47 million to help address the “humanitarian” situation in Gaza.  The Obama regime finds a cover for immunity whether it’s allowing the flooding of illegal immigrants over the U.S. southern border or Gaza by declaring them “humanitarian” crises.
This is what U.S. Gaza assistance includes as of Monday, July 21, 2014:
“These funds will provide critical humanitarian aid, including shelter, food, and medical supplies to Palestinians in Gaza. The United States remains committed to addressing the humanitarian needs of the Palestinian people, and will continue to monitor the humanitarian situation closely.” (US State Department)
It’s little wonder that Kerry was treated like the American FAA treats little old ladies and other non-terrorist types at airports on his arrival in Cairo by Egyptian President Abdel-Fattah el-Sissi, who can spot a Muslim Brotherhood sympathizer and a phony miles away.
Given how he chased the Muslim Bros. out of Egypt, el-Sissi should be renamed “No Sissy”.
In any case, according to CBS News, “an unusual screening process occurred involving Kerry and his State Department team as they were subjected to a metal detector before meeting with President el-Sissi at the Egyptian presidential palace.
“Reuters reports that Kerry and his aides were checked with a metal detector. Security personnel reportedly raised a handheld metal-detector wand to Kerry’s suit jacket before waving him through.
“Kerry’s aides were also subjected to the handheld wand and were told to walk through a metal detector.”
But the Egyptians found no cash as it had been given to Hamas the day before.
At least this traveling circus didn’t have to leave X-Ray pictures behind showing them sans their BVD’S.

“Egypt has proposed a cease-fire plan that is backed by the U.S. and Israel but has been rejected by Hamas. (CBS)
“The proposal calls for a 48 hour halt in fighting followed by intensive talks, explains CBS News correspondent Margaret Brennan, who is traveling with Kerry. In turning thumbs down on the plan, she says, Hamas insisted it it wouldn’t stop firing unless Gaza’s closed border with Egypt is opened to allow in food and medical aid and let some trapped Palestinian civilians out. But, Brennan notes, both the Israelis and the Egyptians fear that would enable Hamas to smuggle in more weapons.
“Egyptian Foreign Minister Sameh Shukri said Tuesday’s talks were focused “to not only resolve this issue, but also to set in motion once again the peace process that Secretary Kerry has been so actively involved in so as to end this ongoing conflict between the Palestinians and the Israelis.”

Kerry’s so-called “sheer will” to achieve a cease-fire agreement in the Gaza strip has shown no evidence of progress in ongoing negotiations aimed at halting fighting that’s left 31 Israelis and 650 Palestinians dead.
How serious would Hamas terrorists take a mealy-mouthed cease-fire peacemaker in league with the United Nations when one already handed them over $47 million and the other—inadvertently or not—provided two schools for weapon stashing?
Hamas doesn’t fear the “sheer will” of empty suit rhetoric but the sheer reminder of an el Sisi who put the Muslim Brotherhood on the run.