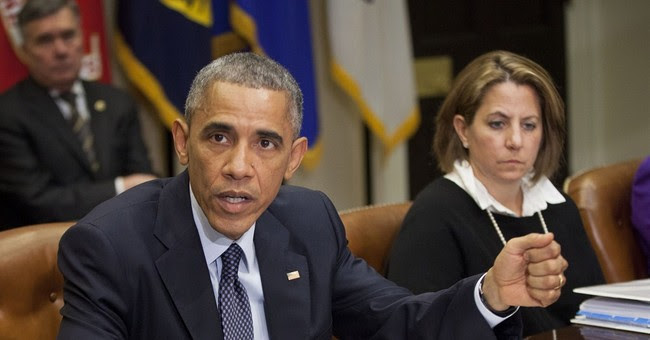 President Obama is poised to show his "compassion" this week by granting work cards to an estimated five million illegal immigrants through an imperial executive order. As for the vast, untold number of law-abiding citizens whose identities have been stolen by foreign law-breakers, two words: Tough luck.

Social Security card fraudsters have made out like bandits thanks to the White House. Their victims are about to get kicked in the teeth again.
Two years ago, when Obama launched his first administrative amnesty known as "DACA" (Deferred Action for Childhood Arrivals), the White House gave aid and comfort to illegal alien applicants who were concerned that their previous felony identity theft and fraud crimes would preclude them from the new non-deportation benefits. The Department of Homeland (In)security made clear that illegal workers who wanted coveted employment documents would not have to disclose to the feds whether they used stolen Social Security numbers.
Center for Immigration Studies analyst Jon Feere reported at the time that ethnic lobbyists and open-borders businesses lobbied the Obama administration hard "to keep American victims of ID theft in the dark while shielding unscrupulous businesses from enforcement." As an Obama official told The New York Times, DHS employees are "not interested in using this as a way to identify one-off cases where some individual may have violated some federal law in an employment relationship."
Translation: See no identity theft. Hear no identity theft. Speak no identity theft.
A high-profile immigration attorney crowed: "Good news for deferred action applicants: If you used a false Social Security card, you need not reveal the number on your deferred action application forms. The U.S. Citizenship and Immigration Services has clarified that when the forms ask for an applicant's Social Security number, it refers to Social Security numbers issued to the applicant. If you used a friend's number, a made-up number or a stolen number, you should answer N/A for 'not applicable' where it asks for the number."
Since then, more than 500,000 DACA applications have been approved with abysmal oversight, little public disclosure and total absolution for identity rip-off artists. The latest planned administrative amnesty will dwarf that ongoing fiasco.
Victimless crimes? Tell that to those who have been harmed by the estimated 75 percent of working-age illegal aliens who have fraudulently used Social Security cards to obtain employment. Tell it to victims in border states with the highest percentages of illegal aliens, where job-related identity theft is rampant.
Tell it to hardworking Americans like Wisconsinite Robert Guenterberg, whose Social Security number was exploited by illegal aliens for years to buy homes and cars -- while the IRS refused to tell the victims about the fraud to protect the thieves' privacy rights.
Tell it to U.S. Air Force veteran Marcos Miranda, whose name and Social Security card were filched by an illegal alien to work at a pork slaughterhouse. He was even thrown in jail for unpaid traffic tickets racked up by his identity thief. "Even though I am Hispanic, I am against illegal immigration," Miranda told the Associated Press. "Even though a lot of them come to work, there are always bad apples. (Identity theft) has really made my perspective ... negative about immigration."
And what about the children? As the Center for Immigration Studies points out: "Children are prime targets. In Arizona, it is estimated that over one million children are victims of identity theft. In Utah, 1,626 companies were found to be paying wages to the SSNs of children on public assistance under the age of 13. These individuals suffer very real and very serious consequences in their lives."
They include Americans like Jay Di Napoli of Colorado Springs, who has fought for years to clear his name and financial records after his late father -- an illegal alien who abandoned his American wife and children -- "took my original Social Security card and birth certificate when I was 2 years old." The criminal "began selling these documents to undocumented workers coming across our border with Mexico. In fact, he sold my Social Security number to illegals over 28 times before his death in 2009, and my number continues to be sold to this day. What's more, my late father's actions have caused extremely grave damage in virtually every facet of my life."
The amnesty brigade loves to extol the virtues of those who are "doing the work no Americans will do." But when it comes to punishing illegal workers who have raided the lives of innocent Americans to feloniously secure jobs, mortgages and medical care, mum's the word.
Obama's new "American Dream" is the stuff of hellish nightmares: Reward the law-breakers. Punish the law-abiders. And sell out our national identity in pursuit of cheap votes and cheap labor. R.I.P.
http://townhall.com/columnists/michellemalkin/2014/11/19/a-white-house-mass-pardon-for-identity-thieves-n1920681/page/full
Posted by theodore miraldi at 10:01 AM