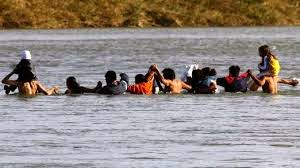 Besides instigating a constitutional crisis, Obama’s dictatorial decree justified the unjustifiable by doing things like leaving out explicatory facts.
Take for instance the statement that “our tradition of welcoming immigrants … has given us a tremendous advantage over other nations. … But today, our immigration system is broken – and everybody knows it.”

What Obama conveniently forgot to mention was that for the greater part of 200 years, immigrants entered America with deference and respect for America’s laws.  For immigrants eager to work, this nation was never viewed as a “golden ticket” promising preferential treatment and entitlements.
Furthermore, “everybody knows” that our so-called “broken immigration system” is really politics morphing into an opportunity that benefits lawlessness.

Even so, the president did weakly denounce the prejudicial practice of allowing illegals to cut the line.  But then he quickly shifted the focus to the sad plight of those who busted through the nation’s border like hungry vagrants crashing an all-you-can-eat buffet.

Obama also took the time to remind America that he’s always been “committed to fixing this broken immigration system.”  Unfortunately, when Barack Obama threatens to fix something – such as the economy, joblessness, or health care – Americans had best take heed.

After all, border agents have been murdered, 75 percent of the most wanted criminals in Los Angeles, Phoenix, and Albuquerque are illegal, and disease, terrorism, and anti-American sentiment have crossed the border in droves.  Yet like a spaced-out hippie on LSD, Obama bragged that “we have more agents and technology deployed to secure our southern border than at any time in our history.”
Careful not to omit the “brief spike in unaccompanied children being apprehended at our border,” Obama claimed that the number is actually “lower than it’s been in nearly two years. … Those are the facts.”
Sure, they’re Grubama facts.
Anyway, Obama didn’t squander the opportunity to blame Republicans for a “broken system” that he refuses to enforce and prefers broken.

Lest anyone doubt it, Barack “I won” Obama insisted that he has the “legal authority to take as President – the same kinds of actions taken by Democratic and Republican presidents before [him],” which he thinks “will help make our immigration system more fair and more just.”
“More fair and just” for whom exactly?

Holding his nose, Barack Obama spoke of Reagan and G.W. Bush, the latter of whom, for the first time in Mr. Obama’s adult life, wasn’t blamed, but was instead exploited.
Obama promised to “deal responsibly with … millions of undocumented immigrants who already live in our country,” such as ISIS terrorists, gang members, murderers, rapists, and pedophiles, as well as those spreading contagious diseases.

The president also stressed that America’s laws are rooted in a document that everyone knows he, as its defender, considers “fundamentally flawed.”
To reassure America that the administration that released onto America’s streets 36,000 illegal-immigrant criminals in 2013 is going to focus “enforcement resources” on “Felons, not families. Criminals, not children… [and] Gang members, not … mom[s],” Obama employed alliteration.

Then the guy who’s never “straight” with anyone said, “[L]et’s be honest – tracking down, rounding up, and deporting millions of people isn’t realistic. Anyone who suggests otherwise isn’t being straight with you.”
But if five million people can’t be tracked down, how are work permits and entitlements going to be distributed?
Either way, sort of like believing that criminals will hand over illegal guns, Barack Obama insisted that lawbreakers who came to America fraudulently will “come out of the shadows” and willingly “submit to a criminal background check.”

Nonetheless, except for the “pass a bill” line, the funniest line in Obama's whole speech was when he said that he’s going to fix our broken immigration system, and then said that fix "does not apply to anyone who might come to America illegally in the future.”

Then, sounding like enforcing the law is contrary to his character, the president reminded America that “[m]ass deportation would be both impossible and contrary to our character.”
Clearly, in Obama’s morally relativistic world, he believes that if illegals “work hard … support their families … [and] … worship at our churches,” this somehow justifies a president discounting the oath he took to defend the U.S. Constitution.

Still, tough-talking Obama took the time to warn future Death Train travelers that “[i]f [they] plan to enter the U.S. illegally, [their] chances of getting caught and sent back … went up” – sure, from minus zero all the way to zero.
Then the owner of a spanking-new birth certificate signed by Dr. Ukulele, Obama, favored son of Kenya and Moneygall, restated his eligibility to be president by saying that “[m]illions of us, myself included, go back generations in this country, with ancestors who put in the painstaking work to become citizens.”
Obama expressed the opinion that “immigrants are a net plus for our economy,” which is a sentiment the families of Brandon Mendoza and Drew Rosenberg, two of many thousands killed by illegal immigrants, might disagree with.

Oops!  Then the president left out manicurists, landscapers, bus boys, and produce handlers by saying it’s hypocritical to not give amnesty to illegal fruit-pickers and bed-makers.
Speaking of hypocrisy, America’s melodramatic president who supports ripping 3,000-4,000 unborn babies from mothers’ wombs every day asked, “Are we a nation that accepts the cruelty of ripping children from their parents’ arms?”

And by implying that immigrants legally crossing the Atlantic or the Pacific are similar to illegals wading across the Rio Grande, Obama injected moral equivalency into the debate.
Moving right along, and right before sharing a tale of a poor unfortunate from Mexico named Astrid Silva, yet again Obama cited Scripture out of context.

Scripture was an attempt to convince Americans to support an executive order that half the country rejects.  That’s also why Obama mentioned Astrid’s crucifix, doll, frilly dress, poor English skills, domestic-worker parents, and her fear of being outed as an illegal.
Funny how Barack Obama mentioned Astrid but ignored those who died as a result of the recent wave of illegal unaccompanied minors from Central America who, with Obama’s knowledge, carried with them the deadly Enterovirus D-68.