Democrats try to figure out what went wrong 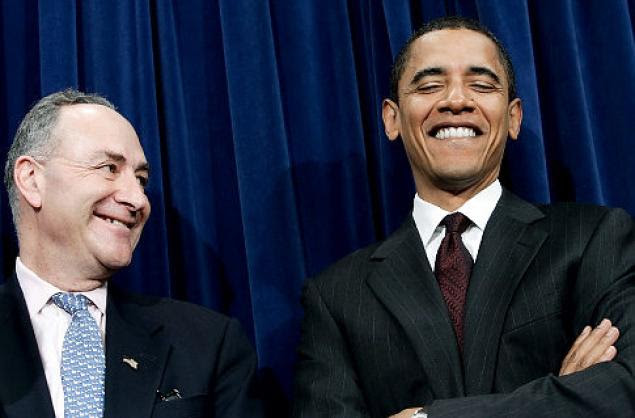 WASHINGTON – Democrats surveying the wreckage of their midterm election disaster are trying to figure out what went wrong, and the question largely has been: Is it the message or the messenger?
Democrats have rarely shown a lack of confidence in their message, or policies, finding the problem instead to be one of marketing. Democrats lack an effective “national advertising campaign,” said former President Bill Clinton after the election.
But some Democrats are beginning to question the message itself, wondering if they have the right policy priorities, with Sen. Chuck Schumer, D-N.Y., and southern Democrats showing particular concern their party has suffered for not making the economy its top priority.
Schumer even explicitly said Democrats need to focus on policies that are “more than just messaging bills.”
As WND reported, much of the criticism from leftists before the election had been directed at the leadership style of the top Democrat, President Obama, who has a reputation among even some of his own supporters for aloofness and finger-pointing.
Among the criticisms:
But the Democrats’ self-criticism may be shifting from style to substance.
As WND reported last week, a number of Democrats thought it was a bad idea for the president to grant amnesty to an estimated five million illegal immigrants without the consent of Congress. Among the Democrat lawmakers who felt Congress should have had a hand in constructing immigration policy through the legislative process were: Sens. Joe Manchin, D-W.V.; Claire McCaskill, D-Mo.; Heidi Heitkanp, D-N.D.; Jon Tester, D-Mont.; Tom Carper, D-Del.; and Al Franken, D-Minn.
But the greatest introspection appears to be coming from those who believe Democrats have erred in not making the economy their top policy priority.
Clinton campaign strategist James Carville famously warned his staff in 1992, “It’s the economy, stupid,” and now, more Democrats seem to be harkening back to that advice to put the priority on pocketbooks.
Schumer set off a bit of a firestorm among party faithful on Monday when he said in a speech to the National Press Club that Democrats made a mistake in 2010 by passing Obamacare instead of focusing more on improving the economy.
The 2008 election gave Democrats control of both the White House and Congress and the freedom to pass virtually any legislation they desired, but, Schumer regretted, “We took their (voters’) mandate and put all our focus on the wrong problem – health care reform.”
Schumer supports Obamacare, “But it wasn’t the change we were hired to make” in 2008.
Some infuriated Democrats shot back that they had, in fact, addressed the economy first, by passing a $787 stimulus program over a GOP filibuster.
But even Obama admitted last month it was, “[I]ndisputable that millions of Americans don’t yet feel enough of the benefits of a growing economy where it matters most – and that’s in their own lives.”
Many economists say, while the recovery has been good for Wall Street, it has not come to Main Street. They blame that on the proliferation of part-time jobs, stagnant wages and an actual drop in the median income of U.S. household over five years of supposed recovery.
According to a U.S. Census Bureau report issued in September, the household median income was $51,900 in 2013. That’s eight percent lower than in 2007, the year before the recession began, and would appear to go a long way toward explaining why millions of Americans “don’t yet feel enough of the benefits of a growing economy.”
And now, Southern Democrats are joining Schumer and those who say the party has veered off course by ignoring the economy.
“We don’t need a new Coke formula,” Mississippi Democratic Party Chairman Rickey Cole told the Associated Press. “The problem is, we’ve been out there trying to peddle Tab and RC Cola.”
Cole said, particularly in the South, identity issues do not play well. The party’s emphasis on such issues as gay rights, minority voting rights, women’s rights and immigration does not resonate with voters there.
“Those people who don’t see themselves in those groups say, ‘What have the Democrats got for me?’” he observed.
Georgia state Sen. Vincent Ford lamented, “No real economic message got through.”
And, Louisiana state Sen. J.P. Morrell, explained, “You have to articulate why the economic policies we advocate as Democrats actually benefit people on the ground.”
Finding that economic message may prove tricky, especially now that voters have given control of the congressional purse strings to the GOP.
Republicans largely favor reducing regulations, lowering taxes and cutting spending to stimulate economic growth, whereas Schumer offered raising the minimum wage, adding more pro-union labor laws and signing trade agreements.
Whether the Democrats’ problem is the message or the messenger, the party’s disarray has been increasingly on public display and their ire has tended to focus on the man at the top, the president.
Last month, WND published a list of more than 40 prominent Democrats and other leftists who had very publicly expressed everything from outrage to irritation with Obama.
And now, it appears the president’s own right-hand man can be added to that list of those he has upset.
Aides to Vice President Joseph Biden leaked word to the press on Monday that he was “ticked off” by the humiliating way Defense Secretary Chuck Hagel was forced to resign after less than two years on the job.
An administration official told Politico that Biden scowled as he received the news in the State Dining Room.
Biden is widely believed to be considering a run for president in 2016.

Read more at http://www.wnd.com/2014/11/democrats-try-to-figure-out-what-went-wrong/#WecIIzPEDRTTSvKj.99
Posted by theodore miraldi at 4:29 PM