Federalism Can Still Save Religious Liberty

In an America divided over sex and marriage, devolving decision making is once again the best solution. 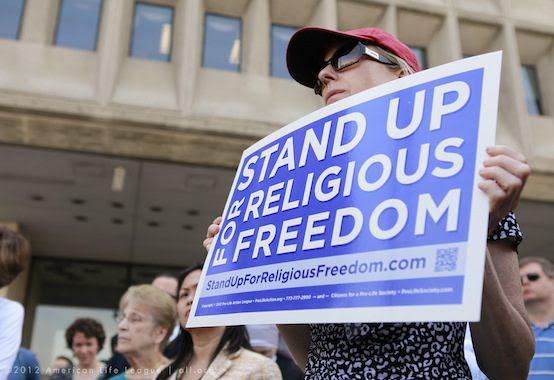 We live in a post-Christian America, broods the insightful “natural pessimist” on morality and religion, Rod Dreher, writing two long pieces on his The American Conservative blog that feature theologian Peter Leithart coming to this dramatic conclusion about government and Christianity in America today:

We’ve fooled ourselves for decades into believing that Christian America was derailed recently and by a small elite. It’s tough medicine to realize that principles inimical to traditional Christian morals are now deeply embedded in our laws, institutions and culture. The only America that actually exists is one in which “marriage” includes same-sex couples and women have a Constitutional right to kill their babies. To be faithful, Christian witness must be witness against America.

Specifically, Leithart had predicted beforehand that “Tax exemption will be challenged, and so will accreditation for Christian colleges and schools that hold to traditional views of marriage. Once opposition to same-sex marriage is judged discriminatory, no institution that opposes it will be unaffected.” He justified his pessimism by Supreme Court Justice Antonin Scalia’s dissent in Windsor:

In the majority’s judgment, any resistance to its holding is beyond the pale of reasoned disagreement. To question its high-handed invalidation of a presumptively valid statute is to act (the majority is sure) with the purpose to “disparage,” ”injure,” “degrade,” ”demean,” and “humiliate” our fellow human beings, our fellow citizens, who are homosexual. All that, simply for supporting an Act that did no more than codify an aspect of marriage that had been unquestioned in our society for most of its existence—indeed, had been unquestioned in virtually all societies for virtually all of human history. It is one thing for a society to elect change; it is another for a court of law to impose change by adjudging those who oppose it hostes humani generis, enemies of the human race.

Dreher concluded with an even darker insight, from Catholic Cardinal Francis George:

I am (correctly) quoted as saying that I expected to die in bed, my successor will die in prison and his successor will die a martyr in the public square. What is omitted from the reports is a final phrase I added about the bishop who follows a possibly martyred bishop: “His successor will pick up the shards of a ruined society and slowly help rebuild civilization, as the church has done so often in human history.”