Lawsuit fights against 'under God' in Pledge of Allegiance

A judge heard arguments Wednesday in a lawsuit filed against a New Jersey school district by a family who claims the Pledge of Allegiance discriminates against children with atheist beliefs.
The Monmouth County family, identified in court papers as John and Jane Doe and their child, sued the Matawan-Aberdeen Regional School District in February, alleging the phrase "under God" in the pledge is discriminatory. State Superior Court Judge David Bauman heard arguments on the school district's motion to dismiss the lawsuit. The case was filed by the American Humanist Association, which claims the recitation of the pledge violates Article 1 of the state's constitution.
“Public schools should not engage in an exercise that tells students that patriotism is tied to a belief in God,” said David Niose, attorney for the American Humanist Association’s Appignani Humanist Legal Center. “Such a daily exercise portrays atheist and humanist children as second-class citizens, and certainly contributes to anti-atheist prejudices.”
The school district doesn't require that students say the pledge. Bauman said there wasn't any evidence the student in question had been "bullied, ostracized or in any way mistreated." but he also noted during his questioning of district attorney David Rubin that district policy requires parents whose children don't say the pledge to furnish an explanation in writing. 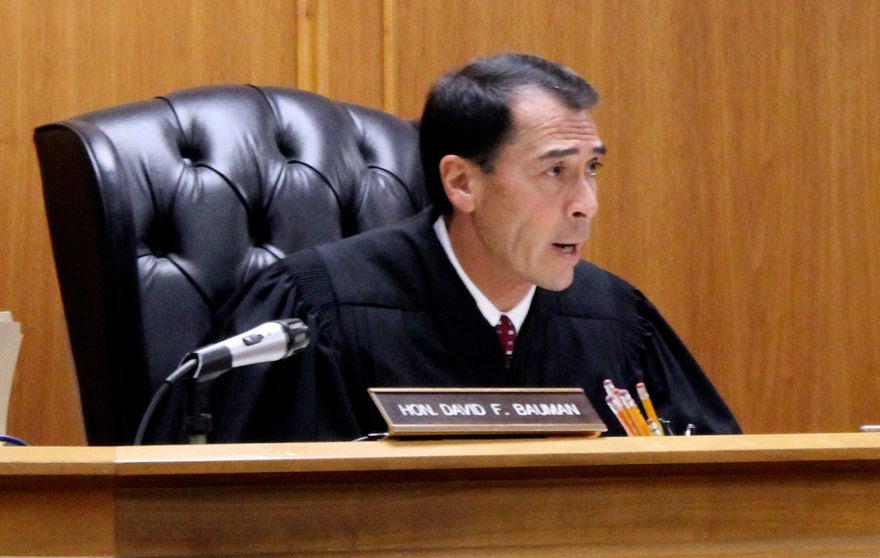 Expand / Contract
Nov. 19, 2014: Monmouth County Superior Court Judge David Bauman listens to arguments during a family's lawsuit against the Matawan-Aberdeen Regional School District over the Pledge of Allegiance in Monmouth County Superior Court in Freehold, N.J. (AP/The Star-Ledger, Ashley Peskoe, Pool)
Rubin said he wasn't aware of any cases in which parents had refused to supply an explanation and didn't know what the ramifications would be if they didn't. He accused the plaintiffs of filing a lawsuit claiming the pledge violates laws against the official establishment of religion "masquerading as an equal protection case."
Bauman didn't issue a ruling Wednesday on the district's motion to dismiss the lawsuit, but said he expected to issue one shortly. Bauman, a nominee by Gov. Chris Christie for the state Supreme Court whose nomination expired before being taken up by the Legislature, probed both sides with hypotheticals, including whether substituting the phrase "under God" with "created by great white men" would create grounds for discrimination suits by women and minorities.
School district officials have claimed they're simply following a state law requiring schools to have a daily recitation of the pledge. In a court filing, the district wrote that the plaintiffs can't claim a violation of equal protection laws because all students are treated equally by not having to recite the pledge.
The American Legion and Knights of Columbus have joined the lawsuit in support of the school district.
In a response to the atheists’ lawsuit, New Jersey high school student Samantha Jones is going to court to defend her right to recite the words “one nation under God” in the pledge. Jones and her family are represented by the Becket Fund for Religious Liberty.
“When I stand up, put my hand over my heart and say the Pledge of Allegiance, I am recognizing that my rights come from God, not from the government,” said Jones, a senior at Highland Regional High School, according to the Becket website. “If anyone wants to remain silent, that is their right. But it is not their right to silence me.”
The phrase "under God" was written into the Pledge of Allegiance in 1954. In May, the highest court in Massachusetts ruled in a similar case that the words "under God" in the pledge reflect a patriotic practice, not a religious one.
“It's not the place of state governments to take a position on God-belief," said Roy Speckhardt, executive director of the American Humanist Association. "The current Pledge practice marginalizes atheist and humanist kids as something less than ideal patriots, merely because they don't believe the nation is under God."
The Associated Press contributed to this report.
http://www.foxnews.com/us/2014/11/19/family-claims-under-god-in-pledge-allegiance-is-discriminatory/
Posted by theodore miraldi at 2:05 PM