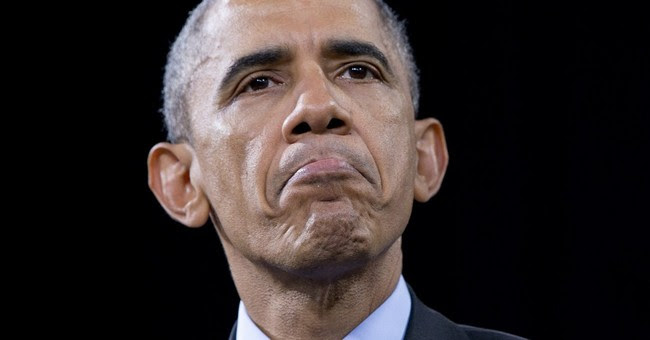 
How does the first black president reward blacks for voting for their hero?
With an executive order: “Go to the back of the employment line. Get behind illegal immigrants, including carriers of tuberculosis and criminals at large. Blessed are the politically useful and illegal immigrants are more useful than African Americans.”
Blacks voted for Obama in record numbers: 91% in 2008 and 87% in 2012. It was historic. Yet, last week via unconstitutional executive order, the president announced an immigration “reform” plan that will disproportionately hurt African Americans.
Trayvon Martin could have been “my son,” Obama sighed in 2012 when his re-election was at stake. Obama used Martin’s tragic death to tell blacks that they could not trust white people. They could only trust him.
In 2008, 2010, 2012, and 2014 Obama fanned racial tensions in order to win the black vote. Instead of using his biracial heritage to foster harmony, he told Republicans they “can come for the ride, but they gotta sit in back.”
In August of 2014, a white cop in Ferguson, MO used lethal force to defend himself against a black man named Michael Brown who had just participated in a strong-arm robbery. Desperate to turn out black voters in the 2014 midterms, the Obama administration made Brown into the new Martin. Attorney General Eric Holder warned blacks not to trust white law enforcement: “I understand that mistrust. I am the Attorney General of the United States. But I am also a black man.”
Today, Obama fans racial tensions with the goal of giving his party a permanent monopoly on the White House. “You can come out of the shadows and get right with the law. That’s what this deal is.” Obama said on Thursday. Over and over, he painted illegal immigrants as victims of a life in the “shadows.”
21.9% of young blacks are unemployed and 14.7% of Millennials overall are unemployed. All Americans are hurting but young people—especially young blacks—are hurting the most. Good thing Obama is focused on a bigger humanitarian crisis: how he and his political party can capitalize on the scores of children who are entering our country illegally.
Empirical data is racially neutral, which is why it is trustworthy. The 2008 Commission on Civil Rights found that illegal immigration is responsible for 40% of the 18-point decline in black unemployment rate between 1960 and 2000. The commission unanimously agreed that competition with illegal immigrants lowered wages and dried up job opportunities for legal Americans, particularly African American males.
“…are we a nation that values families and works together to keep them together?” Obama chided us last week. His question is ironic given that he and Michelle have done more than any president in recent memory to destroy the family, particularly the African American family. John Hopkins University reported this spring that nearly 60% of Millennial women—particularly minority women—who are raising children are doing so without committed fathers. An influx of immigrants into the United States will exacerbate the struggle that single black mothers face as they raise children on their own, in poverty.
Commission on Civil Rights member Peter Kirsanow has testified: "The dearth of job opportunities gives these [black] men less confidence in their ability to support a family, and gives women reason to fear that these prospective husbands will be only another mouth to feed."
Ideologically, Obama is like a boy addicted to the thrill of roller coasters. He spent the past four years telling us:
“If you’re a criminal, you’ll be deported,” Obama promised on Thursday. Really? Then why hasn’t Cinthya Garcia-Cisneros been deported after being convicted of killing two young women in a hit-and-run? Surely this has nothing to do with helping your ol’ pal Hillie overcome Benghazi allegations with a few votes from criminals.
“Even as we are a nation of immigrants, we’re also a nation of laws.” Obama preached on Thursday.Take your own advice, Mr. President. Law-abiding African Americans who voted for you are hurting the most because of your policies, and they should not be told to go to the back of the employment line, behind criminals.
http://townhall.com/columnists/katiekieffer/2014/11/24/obama-flips-blacks-on-backs-n1922446
Posted by theodore miraldi at 9:09 AM