Sheriff Joe: 'This is going to open the floodgates' 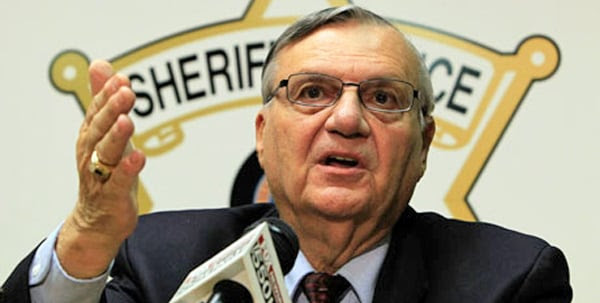 In a radio interview set to air Sunday, Sheriff Joe Arpaio of Maricopa County, Arizona, worried President Obama’s recent executive actions on immigration will only increase the number of illegal aliens crossing the southern border, including those who commit violent crimes while in the U.S.

“One thing I’m really concerned [about],” Arpaio said, “this is going to open up more floodgates because everyone over [the border] is going to think, ‘Wait a minute, let’s come on in to the United States, and we’re going to get a free pass.’ So I think we’re going to see more people coming in to our country.”
Arpaio’s comments are set to appear on Sunday’s “Aaron Klein Investigative Radio” on New York’s 970 AM The Answer. An early copy of the segment was obtained by WND.
The sheriff, whose enforcement of immigration laws and criminal laws violated by border crossers has frequently put him at odds with the federal government, has already filed a lawsuit over Obama’s executive plan to curb deportations.
“This unconstitutional act by the president will have a serious detrimental impact on my carrying out the duties and responsibilities for which I am charged as sheriff,” Arpaio’s lawsuit states.
What concerns Arpaio most, however, is the possibility Obama’s executive order could increase the release of criminal illegals onto the streets.
“For the last 9 months I’ve been doing reviews of all the people in my jail, which averages about 8,500,” Arpaio told Klein. “When I started checking every month all the inmates that are in the jail for state crimes, not for federal crimes, but they’re all here illegally. So we’re looking at 4,000. … Four thousand [illegal alien inmates], and 36 percent of those have been coming back to the jail over and over again, and for very serious crimes.
“So what’s happening?” Arpaio asked. “Are they being deported, and they keep coming across that fence? Or are they let out the back door when we turn them over to the government?
“I know the president with his new policy … he keeps saying we’re only going to deport the more violent criminals, but what does that mean?” Arpaio continued. “All the others that have been arrested will never be deported? I’m concerned about that. They should be deported. They committed a crime … when they came over the border anyway.”

Read more at http://www.wnd.com/2014/11/sheriff-joe-this-is-going-to-open-the-floodgates/#qrwcUZxlhyfqeWTc.99
Posted by theodore miraldi at 1:57 PM