NEW YORK (Reuters) - Leading U.S. CEOs, angered by the Obama administration's challenge to certain "workplace wellness" programs, are threatening to side with anti-Obamacare forces unless the government backs off, according to people familiar with the matter.
Major U.S. corporations have broadly supported President Barack Obama's healthcare reform despite concerns over several of its elements, largely because it included provisions encouraging the wellness programs.
The programs aim to control healthcare costs by reducing smoking, obesity, hypertension and other risk factors that can lead to expensive illnesses. A bipartisan provision in the 2010 healthcare reform law allows employers to reward workers who participate and penalize those who don't.
But recent lawsuits filed by the administration's Equal Employment Opportunity Commission (EEOC), challenging the programs at Honeywell International and two smaller companies, have thrown the future of that part of Obamacare into doubt.
The lawsuits infuriated some large employers so much that they are considering aligning themselves with Obama's opponents, according to people familiar with the executives' thinking.
"The fact that the EEOC sued is shocking to our members," said Maria Ghazal, vice-president and counsel at the Business Roundtable, a group of chief executives of more than 200 large U.S. corporations. "They don't understand why a plan in compliance with the ACA (Affordable Care Act) is the target of a lawsuit," she said. "This is a major issue to our members."
"There have been conversations at the most senior levels of the administration about this," she added.
View gallery 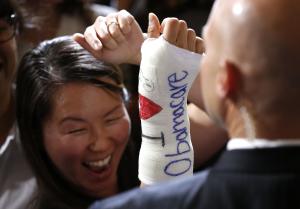 Cathey Park of Cambridge, Massachusetts reacts after U.S. President Barack Obama signed her cast dur …
Business Roundtable members are due to meet Obama in a closed-door session on Tuesday, where they may air their concerns.
It is not clear how many members of the group, whose companies sponsor health insurance for 40 million people, are considering any action. It is also not clear if the White House can stop the EEOC from challenging wellness programs.
A threat of a corporate backlash comes at a time when Obama faces criticism even from his Democrats' ranks that he had devoted too much political capital to healthcare reform.
Such action could take the form of radical changes in health benefits that employers offer. It could also mean supporting a potentially game-changing challenge to Obamacare at the Supreme Court next year and expected Republican efforts to eviscerate the law when they take control of Congress in 2015.
CARROTS AND STICKS
Obamacare allows financial incentives for workers taking part in workplace wellness programs of up to 50 percent of their monthly premiums, deductibles, and other costs. That translates into hundreds and sometimes thousands of dollars in extra annual costs for those who do not participate.
Typically, participation means filling out detailed health questionnaires, undergoing medical screenings, and in some cases attending weight-loss or smoking-cessation programs.
View gallery 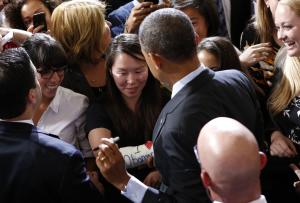 U.S. President Barack Obama signs the cast of Cathey Park of Cambridge, Massachusetts after he spoke …
One of the arguments presented in the lawsuit against three employers is that requiring medical testing violates the Americans with Disabilities Act.
That 1990 law, according to employment-law attorney Joseph Lazzarotti of Jackson Lewis P.C. in Morristown, N.J., largely prohibits requiring medical tests as part of employment.
"You can't make medical inquiries unless it's consistent with job-necessity, or part of a voluntary wellness program," he said.
The lawsuits are based on the view that it is no longer voluntary if employees face up to $4,000 in penalties for non-participation, loss of insurance or even their jobs.
Employers, however, see the lawsuits as reneging on the administration's commitment to an important part of the healthcare reform.
On Nov. 14, Roundtable president John Engler sent a letter to the Labor, Treasury and Health and Human Services cabinet secretaries who oversee Obamacare asking them to "thwart all future inappropriate actions against employers who are complying with" the law's wellness rules, and warning of "a chilling effect across the country."
Asked for a response to the letter, an administration official told Reuters that it supported workplace health promotion and prevention "while ensuring that individuals are protected from unfair underwriting practices that could otherwise reduce benefits based on health status."
UNDERMINING OBAMACARE
In practical terms, large corporations have several ways to undermine Obamacare if they decide to.
One is to support legal challenges to the subsidies given to low-income individuals who buy health insurance on the federal exchange established under the law. Neither the Business Roundtable nor any of its CEO members have done this so far. The Supreme Court is expected to hear oral arguments in the case in 2015.
Another option is to make top executives available for hearings on repealing or diluting Obamacare. "We never did this before," said the person familiar with the executives' thinking. "But they could turn up the noise. I don't think the White House would want the CEOs turning on them and supporting these efforts on the Hill."
The nuclear option would be to radically change employer-sponsored health insurance. Large corporations are highly unlikely to eliminate it, but they might give workers a fixed amount of money to buy coverage on a private insurance exchange. That would allow employers, almost all of which pay workers' medical claims out of their earnings, to cap their healthcare spending.
(Reporting by Sharon Begley; Editing by Michele Gershberg and Tomasz Janowski)
https://news.yahoo.com/exclusive-u-ceos-threaten-pull-tacit-obamacare-support-120556143--sector.html