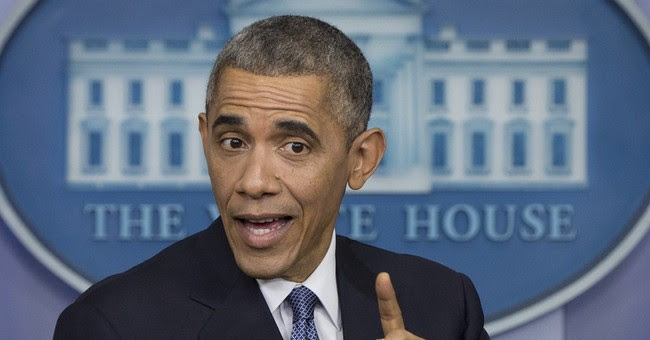 
Until now there were two types of peaceful American change. One was a president, like Franklin D. Roosevelt or Ronald Reagan, working with Congress to alter American life from the top down by passing a new agenda. The other was popular reform pressure, as happened in the 1890s or 1960s, to change public opinion and force government to make new laws or change existing ones.
Barack Obama has introduced a quite different, third sort of revolution. He seeks to enact change that both the majority of Americans and their representatives oppose. And he tries to do it by bypassing Congress through executive orders and presidential memoranda of dubious legality.
Take so-called climate change. Even when Obama enjoyed a Democratically controlled Congress, he could not ram through unpopular cap-and-trade legislation. Now he promises to reduce carbon emissions through executive orders. He just signed a climate change "accord" with China, bypassing the U.S. Senate, which by law must approve treaties with foreign powers.
Polls show that a majority of Americans oppose amnesties and want immigration laws enforced. The 2014 midterm elections were a reminder of those realities. No matter. Obama just did what for six years he warned was illegal: bypass immigration law and grant millions exemptions from enforcement through what he once called "a pen and a phone."
For over a half-century, both Democratic and Republican administrations and Congresses have excluded Cuba from normal U.S. relations. The Castro regime once hosted nuclear missiles pointed at the U.S. It sent expeditionary forces around the globe to spread Communism. It executed opponents, and it still locks up tens of thousands of political prisoners. It drove more than a million refugees to U.S. shores.
Obama knew there was neither popular nor congressional support to re-establish normal ties, especially given that the elderly dictators the Castro brothers are soon to pass on. The traditional props for Cuba's failed Cuban economy -- Russia and Venezuela -- now have failed economies of their own.
Easing up on Cuba makes about as much sense as if Reagan had given up on the Cold War in 1981, on the principle that prior opposition to Communism for over a half-century had failed to collapse the tottering Soviet Union.
Obama is said to feel liberated in his revolutionary mode, without worry of either midterm elections or his own re-election. He promises in his "fourth quarter" to enact more executive orders that will radically transform America, despite potential opposition from voters and the Congress.
In part the Obama revolution is linguistic. Words have been reinvented to mask unpleasant reality. Executive orders are "presidential memoranda" to disguise their ubiquity. Costly Obamacare is an "Affordable Care Act." Treaties are mere "accords" that do not need to be ratified by the Senate. Deportations are redefined to create a false sense that immigration law is enforced. Terrorism is disassociated from its Islamic roots through euphemisms like "man-caused disaster."
In part the Obama revolution is bureaucratic. Old agencies are reinvented for new progressive missions. The NASA director promised to pursue Muslim outreach. The IRS went after political opponents. The actions of Immigration and Customs Enforcement are selective, and predicated on politics that are deemed favorable to the long-term Obama agenda. Whether the Department of Justice under Eric Holder intervened in a case was predicated on race, class and gender criteria rather than just the legal merits.
In part the Obama revolution is a war to divvy up the nation by race, class and gender. Differences are all stoked through various made-up wars. Incendiary presidential advisers like Al Sharpton, inflammatory rhetoric such "nation of cowards" and "punish our enemies," and presidential commentary on controversies such as the Trayvon Martin or Michael Brown cases inflame and divide.
After six years of Obama's tenure, the president's approval rating is just above 40 percent. He has lost more congressional seats during his administration than has any president in over a half-century. His party is in shambles, with historic midterm losses in state legislatures and governorships.
Obama's promised new legislation -- gun control, climate change, Obamacare -- was either rejected by Congress, or passed but found to be both unpopular and nearly unworkable. Positive changes -- such as lower gas prices brought on by new American oil and gas discoveries and innovative new methods of extraction -- came despite, not because of, Obama.
Yet the president presses on with his unpopular agenda, believing, as did Napoleon, that he alone is the revolution -- intent to ignore popular opinion, the rule of law and Congress. He assumes that his mastery of the teleprompter and iconic status as the first black president exempt him from congressional censure or outright public revolt.
In the next two years, we will see presidential overreach that we have not witnessed in modern memory.
http://townhall.com/columnists/victordavishanson/2014/12/23/a-oneman-revolution-n1935279/page/full
Posted by theodore miraldi at 9:12 AM