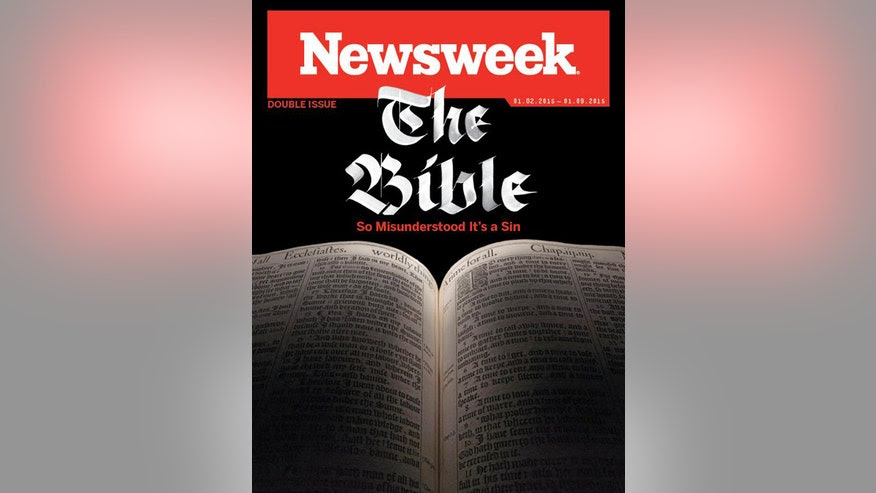 
Newsweek is launching the New Year with an old school attack on the Bible and Christians. It was just the sort of holiday hit piece that we’ve come to expect from these anti-Christian pinheads.
I imagine the Yuletide season must bring about near celebrations in the hallways of Newsweek as writers giddily try to find new ways to defile the followers of Christ.
This year’s winner was Kurt Eichenwald – and he certainly spun quite a yarn – one truly worthy to be published in a magazine. Mr. Eichenwald is known around literary circles as a man of words – and he certainly used most of them in his verbose essay.

I’m not sure why, but the folks over at Newsweek seem to hold a mighty big grudge against Christians. Maybe somebody spiked their Kool-Aid during Vacation Bible School? Who knows?

“The Bible – So Misunderstood it’s a Sin,” was the title of his treatise – of such import that editors demanded it grace the cover of the magazine.
At first glance, I thought Mr. Eichenwald’s essay was a failed attempt at satire. However, by the end of the first paragraph, I realized it was meant to be a scholarly work. By the end of the second paragraph I was overcome by the fumes from this steaming pile of stink.
Newsweek’s 16-page diatribe portrays Evangelical Christians as homophobic, right-wing fundamentalist hypocrites who believe an unbelievable Bible. And just in case the reader misses the writer’s subtle nuance, the essay was illustrated with images of snake handlers, Pat Robertson and the Westboro Baptist Church.
That’s because in the minds of Newsweek’s esteemed editors, most evangelical Christians spend their weekends dancing with snakes and picketing gay nightclubs. Merry Christmas, America.
“They wave their Bibles at passersby, screaming their condemnation of homosexuals,” Eichenwald wrote. “They fall on their knees, worshipping at the base of granite monuments to the Ten Commandments while demanding prayer in school. They appeal to God to save America from their political opponents, mostly Democrats. They gather in football stadiums by the thousands to pray for the country’s salvation.”
I’m not sure why, but the folks over at Newsweek seem to hold a mighty big grudge against Christians. Maybe somebody spiked their Kool-Aid during Vacation Bible School? Who knows?
“These are God’s frauds, cafeteria Christians who pick and choose which Bible verses they heed with less care than they exercise in selecting side orders for lunch,” Newsweek’s writer blathered. “They are joined by religious rationalizers – fundamentalists who, unable to find Scripture supporting their biases and beliefs, twist phrase and modify translations to prove they are honoring the Bible’s words.”
As if Newsweek was trying to honor the Bible.  The magazine goes on to advance theories that some of the New Testament books are forgeries and it calls I Timothy “one of the most virulently anti-woman books of the New Testament.”
That statement then leads to a virulently anti-woman attack on Minnesota Rep. Michele Bachmann and former vice presidential candidate Sarah Palin – because nothing says “Merry Christmas” to liberals like bashing the Baby Jesus and Sarah Palin.
Get a load of this subheadline: “Sarah Palin is sinning right now.”
Here’s what the magazine had to say about Bachmann: “Well, according to the Bible, Bachmann should shut up and sit down. In fact, every female politician who insists the New Testament is the inerrant word of God needs to resign immediately or admit that she is a hypocrite.”
I don’t know Mr. Eichenwald personally, but it strikes me that he might not have a good time at a Billy Graham Crusade.
Newsweek also wagged its finger at Texas Gov. Rick Perry and Louisiana Gov. Bobby Jindal for attending public prayer rallies.
“Jesus would have been horrified,” Eichenwald wrote.
Dr. Albert Mohler is president of The Southern Baptist Theological Seminary – one of the largest seminaries in the world. He’s also one of the nation’s leading evangelicals.
Mohler’s takedown of Newsweek and Eichenwald is brilliant. You can read it here.
“Newsweek’s cover story is exactly what happens when a writer fueled by open antipathy to evangelical Christianity tries to throw every argument he can think of against the Bible and its authority,” Mohler wrote on his blog. “To put the matter plainly, no honest historian would recognize the portrait of Christian history presented in this essay as accurate and no credible journalist would recognize this screed as balanced.”
Mohler called the essay an “embarrassment” and correctly noted that the writer had an axe to grind “and grind he does.”
“To take advantage of Newsweek’s title – it so misrepresents the truth, it’s a sin,” he wrote.
The news magazines do this all the time – attacking Christians during the Christmas and Easter seasons. It’s a free country. We have a free press. They can write whatever they choose.
But the national news magazines never seem to target Islam. When was the last time Newsweek or Time published an attack piece on Muhammad during Ramadan?
I wonder if Newsweek would have the courage to publish “The Koran: So Misunderstood It’s a Sin”?
I wonder if Newsweek would allow a feminist to weigh in on what the Islamic holy book says about women?  Perhaps Newsweek could illustrate their story with cartoons of Muhammad – or maybe photographs of jihadists beading Christians in the name of Allah?
But we all know that won’t happen, right Newsweek?
http://www.foxnews.com/opinion/2014/12/30/happy-2015-newsweek-hit-piece-smears-bible-christians/?cmpid=NL_opinion
Posted by theodore miraldi at 10:51 AM