Evan Gahr
The Obama administration’s Justice Department funneled at least $1.5 million in grants to a New York legal-aid group featured in a new rap video that depicts two young black men aiming handguns at a white police officer.
Some may find the lyrics eerily similar to the social media postings of the man accused of shooting and killing two New York City police officers execution-style in Brooklyn on Saturday.
>>> Exclusive to The Daily Signal
The video for  “Hands Up,” which also shows a white police officer gunning down a black motorist wearing a hoodie, contains lyrics suggesting revenge for much-publicized deaths of black men in confrontations with police.
Credited to rappers Uncle Murda and Maino, the video is subtitled “Eric GarnerTribute,” a reference to a black man who died while being pinned and restrained on a sidewalk by New York police officers.
The taxpayer money that went to the organization shown in the video, theBronx Defenders, comes from a Justice Department program named forEdward Byrne, a New York Police Department officer who was shot dead at close range in 1988.
>>> Watch the Entire Video at Bottom
Among the lyrics to “Hands Up”:

For Mike Brown and Sean Bell,  a cop got to get killed
’cause I’m black, police think they got the right to shoot me
No jail time, their punishment is death’s duty
… By any means necessary let’s make them respect us 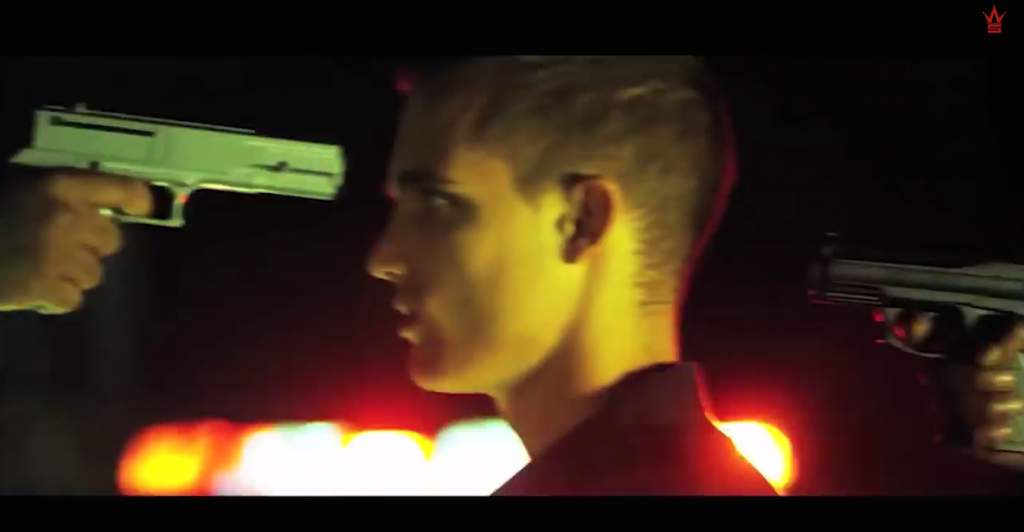 Photo: Screen shot from “Hands Up,” World Star Hip Hop
Police investigators say that hours before he shot Officers Wenjian Liu and Rafael Ramos as they sat in their squad car in Brooklyn, Ismaailyl Brinsleywrote these words on his Instagram account: “I’m putting wings on pigs today. They take 1 of ours, let’s take 2 of theirs.”
In a recurring image in their video, rappers Uncle Murda and Maino point guns at the front and back of the head of an actor in a police uniform. The video also features other actors in police uniforms and cars with the markings of NYPD cruisers.
In September, Rep. Jose Serrano, D-N.Y., announced the award of $350,000 to the Bronx Defenders from the Justice Department’s Edward Byrne Memorial Justice Assistance Grant Fund. Serrano represents a portion of the Bronx.
“Bronx Defenders offers legal services for criminal trials, but their service model goes beyond that,” Serrano said, adding:

It also offers social services and help with employment, housing and other issues that may arise because of a person’s involvement with the criminal justice system. I am glad to see that the Department of Justice recognizes the successes of their work.

The organization, which was founded in 1997 and boasts some high-powered corporate lawyers on its board, has enjoyed a steady flow of taxpayer dollars since President Obama took office in 2009.
In  2012, Bronx Defenders also received $350,000 from the Justice Department’s Byrne grant program, according to data at USASpending.gov.  It received a $300,000 grant in fiscal 2011 and $250,000 in both 2009 and 2010, for a total of $1.5 million.
>>> The Surprisingly Bipartisan Response to the Garner Case, in 19 Tweets
The New York Post first reported Bronx Defenders’ cameo appearance in the rap video. That report, however, did not mention taxpayer funding through the Justice Department for the organization.
Bronx Defenders received $47 million from New York City over the past two years, the Post reported.
In a statement given to the newspaper, the legal-aid group said it had not been informed the video would show a police officer held at gunpoint.
The group said it had asked for the video, released Dec. 3, to be pulled. As of today it remained on the website of its producer, worldstarhiphop.com, and onYouTube. 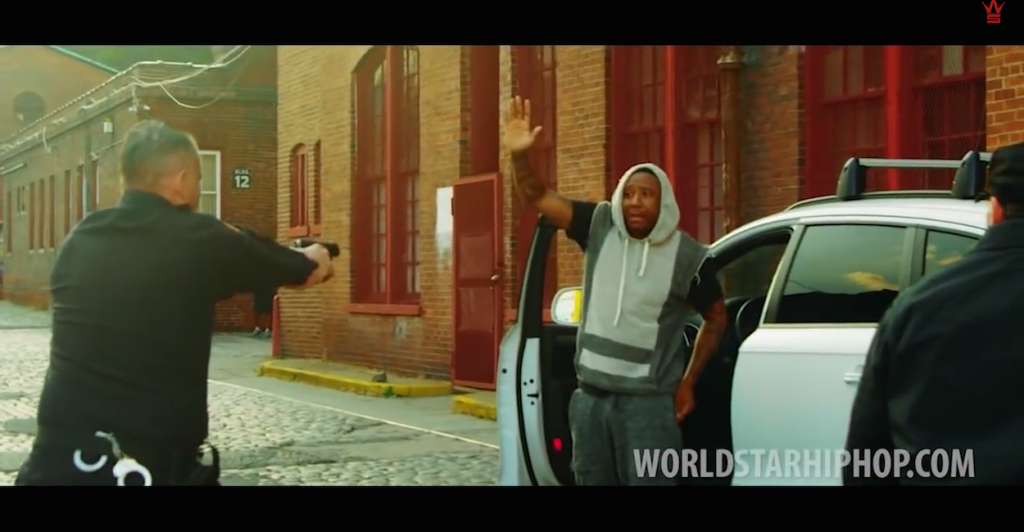 Photo: Screen shot from “Hands Up,” World Star Hip Hop
Uncle Murda is the stage name for New York rapper Leonard Green, 34, who was signed to a major-label deal by rap superstar Jay-Z.
Green survived being shot in the head as he sat in a parked car in New York in January 2008, according to his Wikipedia entry. He refused to cooperate with the investigation and blamed police for the shooting.
Maino is the stage name of Brooklyn-born rapper Jermaine Coleman, 41.  Convicted of robbing and kidnapping a drug dealer, Coleman began rapping during a 10-year prison term, according to Wikipedia.
Among other lyrics from their “Hands Up”:

Killin’ unarmed black men, makin’ mothers holla
And this what the government payin’  with our tax dollars?
(Crazy!) All these unjustified shootin’s
Then they call us animals when we start lootin’
Those kids ain’t had no gun and the police knew it
Jay need to talk to Obama or let me do it …
My lil’ homie told me he ready to ride
Ferguson was on his mind, he ready to fire
Staring at a cop who got death in his eyes
He want to kill me, I can tell, so my head’s in the sky
I’m stressing so I’m grabbing my MAC-11 [pistol]
Told my mama I’m’a end up on Channel 11

The video begins in the style of a documentary before becoming dominated by images of the rappers and dramatized police-citizen confrontations.
One segment shows a distraught woman, presumably the mother of a victim of police brutality, walking into the offices of Bronx Defenders.  She is comforted by someone who appears to be Jesus Perez, the group’s managing director of technology and evaluation.
Perez and executive director Robin Steinberg have not responded to emails seeking comment, including on whether Bronx Defenders helped finance the video.
Ben Duke, a Bronx Defenders board member, declined to say whether he thought his group should apologize for its participation in the video. “I am not in a position to comment,” he said.
Duke, a prominent corporate lawyer, promised to relay a request for comment to the organization.
A message left with the press officer for the Justice Department’s Bureau of Justice Assistance, which oversees the Edward Byrne Memorial Justice Grant Program, has not been returned.
The video, which had nearly 150,000 views at the time this article was published, can be viewed in its entity here. Warning: Many viewers may find some language offensive and some images disturbing.
Various renditions of the sometimes obscene lyrics to “Hands Up” may be found online, including here, here and here.
Evan Gahr, an investigative reporter, previously was a press critic for the New York Post and a reporter for Insight magazine, a sister publication of the Washington Times.
Posted by theodore miraldi at 10:13 AM