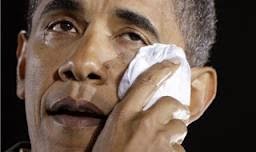 
Enjoying his vacation in Hawaii President Obama has dispatched Vice President Joe Biden to New York to represent the administration at the funeral of slain New York Police Officer Rafael Ramos, in a move some would consider a clear indication of his hostility towards and disdain for law enforcement.
To send a loose cannon like Biden to such a solemn occasion, knowing full well that Biden is more than likely going to say or do something truly insensitive or stupid, shows that the president has little regard for the feelings of police professionals in New York and around the country.The vice president for his part isn’t really to blame, he’s just a buffoon, the Obama Administration Court Jester who can’t help himself.
Meanwhile, Barack Obama’s Race Czar Al Sharpton is now complaining of receiving death threats as a result of his leading marches against the police in New York City, just prior to the two police officers deaths.Go figure, Al Sharpton trying to steal the spotlight from two martyred police officers ?Who would have thought that Reverend Al could stoop so low ?(Well, just about anyone who knows him.)
North Korea’s two-bit dictator Kim Jong Un throws a hissy fit over Hollywood depicting him in an unfavorable way in a low budget film production, so he sends a cyber-attack our way to embarrass some Hollywood executives.Which one would think would be hard to do if they aren’t already embarrassed by most of the films they produce.
Barack Obama’s answer is to knock out the entire North Korean Internet service, inconveniencing eighteen people inside the hermit nation of twenty-five million.The only one really inconvenienced was probably Un (or is it Kim, whatever his last name is), who couldn’t download any porno for several hours, and was probably so angry that he fed another of his relatives to the dogs.
Earlier this year, slapping themselves on the back in celebration the Obama Administration traded five hardened Taliban terrorists for Army Sergeant Bowe Bergdahl, only now to find out that he’s probably going to be court-martialed by the Army for desertion.They gave up five terrorists who are likely to kill Americans again, for an Army deserter of questionable allegiance to this country.Maybe there’s something to Senator Rubio’s suggestion that Barack Obama is the worst negotiator since Jimmy Carter.
One wonders at times who’s whispering into the president’s ear, is it his Secretary of State John Kerry (can anyone name an accomplishment ?), who was tasked with filling the large shoes of his predecessor Hillary ‘Benghazi’ Clinton (can anyone name an accomplishment ?), or perhaps Eric Holder, the outgoing attorney general who is leaving the Obama Soap Opera for a guest spot on TV’s ‘The Biggest Loser’.
Whomever it is they are helping this on-going soap opera get rave reviews from the late night comedians, who are getting lots of mileage out of the president’s tanking approval numbers.
While the president casually body-surfs in Hawaiian waters, soaking up the sun and planning to direct the next episode of his on-going soap opera.
http://finance.townhall.com/columnists/dwwilber/2014/12/26/the-continuing-obama-soap-opera-n1935876/page/full
Posted by theodore miraldi at 10:04 AM