Holder: Critics may be partly driven by race. 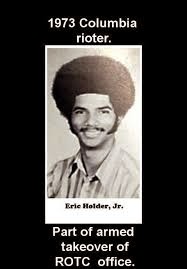 Attorney General Eric Holder plans to push, during his final weeks in office, a new standard of proof for civil-rights offenses, saying in an exit interview with POLITICO that such a change would make the federal government “a better backstop” against discrimination in cases like Ferguson and Trayvon Martin.
In a lengthy discussion ranging from his own exposure to the civil rights movement of the ’60s to today’s controversies surrounding the shootings of Trayvon Martin and Michael Brown, Holder also acknowledged that he felt some of his own struggles with Republicans in Congress during his six years in office were driven partly by race.
“There have been times when I thought that’s at least a piece of it,” Holder said, adding that “I think that the primary motivator has probably been political in nature … [but] you can’t let it deflect you from … your eyes on the prize.”

Holder told POLITICO that between now and his departure, probably in early March when the Senate is expected to confirm Loretta Lynch as his successor, he will call for a lower standard of proof for civil rights crimes. Such a change would make it easier for the federal government to bring charges in the case of a future Ferguson or Trayvon Martin.
“I think some serious consideration needs to be given to the standard of proof that has to be met before federal involvement is appropriate, and that’s something that I am going to be talking about before I leave office,” Holder, 64, said.
The attorney general’s comments appeared to be aimed partly at preparing the country for the possibility that no federal charges would be brought in the death of Michael Brown in Ferguson, Mo., last summer. Holder said the inquiry would be completed when he left office, expected around the second week of March.


The Justice Department announced Tuesday that the Martin investigation had been closed, with “insufficient evidence to pursue federal criminal civil rights charges” against George Zimmerman, the neighborhood watch coordinator who shot the unarmed black teenager to death back in 2012.
Asked if the bar for federal involvement in the civil rights offenses is too high for federal prosecutors to make cases in shootings like those of Martin and Brown, Holder suggested it was.
“I think that if we adjust those standards, we can make the federal government a better backstop — make us more a part of the process in an appropriate way to reassure the American people that decisions are made by people who are really disinterested,” he said. “I think that if we make those adjustments, we will have that capacity.”
Lawyers in the Justice Department are looking into various possible reforms of civil rights law. Depending on their determination, it’s possible that Holder will simply argue about the need for a lower standard of proof rather than propose a specific legislative remedy. Possible changes include toughening hate-crimes laws, which were under consideration in the Martin case, and establishing a broader standard for what constitutes a “deprivation of rights under color of law,” the provision that could apply to the police shooting in Ferguson.


Nonetheless, Holder suggested that young African-Americans who are frustrated about the lack of federal prosecution in the Martin case should take heart in the overall record of the Justice Department under his leadership.
“We have done independent, thorough investigations in all of the matters that we have examined, and we have brought record numbers of cases against police departments around this country,” he said. “I don’t think anybody would be able to look at this Justice Department over the last six years and say that we’ve been anything other than aggressive in trying to root out inappropriate police conduct while, at the same time, trying to establish — or reestablish — bonds of trust between communities of color and people in law enforcement.”
Throughout much his tenure, Holder has been a frequent target of criticism by Republicans in Congress, leading to some pointed confrontations. He was voted in contempt of Congress by House Republicans in 2012, and has sometimes felt disrespected during Capitol Hill appearances. He refused to dismiss the notion that some of the hostility was related to his race, but acknowledged that “it’s hard to say — you know, hard to look into people’s minds, you know, their hearts.”
But when he was asked what book he would recommend to a young person coming to Washington, like his 32-year-old aide Kevin Lewis, who started at the White House at age 26, Holder made a revealing choice: “The Autobiography of Malcolm X.”


—Writing a letter to Trayvon Martin’s parents: “[O]ne of the things it’s certainly going to talk about is my admiration for the way in which they have conducted themselves. The loss of a child is not something that we are biologically engineered to handle, and the dignity with which they have carried themselves — the determination that has been generated in them to make something positive out of the tragedy that they have had to endure — has created in me a great deal of admiration for them.”
—Considering returning to his former law firm of Covington & Burling, where he was a litigation partner in Washington. He plans to remain involved in President Barack Obama’s My Brother’s Keeper, a mentoring and youth-empowerment program that Holder has said might be the president’s greatest legacy.
—Hoping to work with a university or think tank about setting up an Eric Holder Institute for Race and Justice. Such an organization could serve as a repository for his papers, and as a platform for him to continue his efforts on post-Ferguson issues – building trust between police and communities of color.
—Planning to do some binge TV-watching: “I have to catch up on ‘House of Cards,’ … ‘Homeland,’ a lot of movies that I’ve not had a chance to see. … I’ll undoubtedly watch ‘The Godfather’ for the 50th time. That’s my favorite all-time movie. I haven’t seen that for a while.”
Holder had only praise for Obama, the man who appointed him, disputing the claims of some African-American leaders that the first black president hasn’t really delivered for the black community: “You know, very often, empty barrels make the most noise. And I think there are any number of measures by which you can say that this presidency has been successful in a whole variety of ways, and especially when it comes to people of color.”
Asked if America will have another black president, Holder said: “Oh, sure. I think so. I think America is in a fundamentally different place than it was when I was growing up and where the thought of an African-American president would be thought of as almost absurd . . . We have an African-American president. This country is ready for a woman to be president. This country is ready for somebody of Hispanic origin, Asian origin.”
Is this country ready for Hillary?
“Yeah, I think this country is ready for Hillary,” he said. “I don’t know if she’s going to run, but I think if she does, she will be a formidable candidate. I think that this country is just ready, generally, to have a woman as commander-in-chief.”