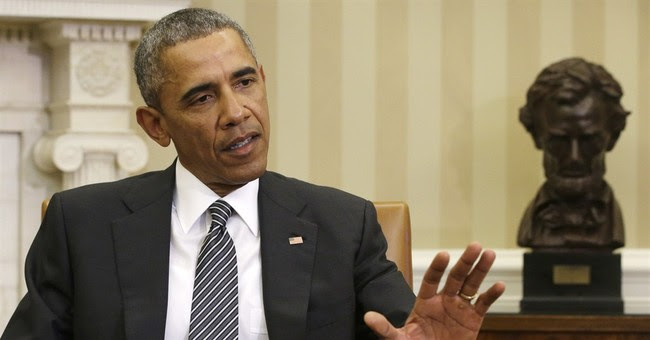 As the White House kicks off day-two of a summit on combating generic violent extremism, President Obama has published an op-ed in the Los Angeles Timestitled, "Our fight against violent extremism." While the administration has overtly refused to specifically name "Islamic" terror, the piece finally acknowledges (albeit inadvertently) the regular existence of violence inside Islam. Still, Islamic extremism isn't specifically named and won't be during the three-day conference at the White House this week.

The United States has made significant gains against terrorism. We've decimated the core al Qaeda leadership, strengthened homeland security and worked to prevent another large-scale attack like 9/11.

At the same time, the threat has evolved. The al Qaeda affiliate in Yemen actively plots against us. Since 9/11, terrorists have murdered U.S. citizens overseas, including in the attacks in Benghazi, Libya. Here in the United States, Americans have been killed at Ft. Hood and during the Boston Marathon.

Groups like al Qaeda and ISIL promote a twisted interpretation of religion that is rejected by the overwhelming majority of the world's Muslims. The world must continue to lift up the voices of Muslim clerics and scholars who teach the true peaceful nature of Islam. We can echo the testimonies of former extremists who know how terrorists betray Islam. We can help Muslim entrepreneurs and youths work with the private sector to develop social media tools to counter extremist narratives on the Internet.

Claiming "core Al-Qaeda has been decimated" is extremely misleading. While former leaders like Osama bin Laden are dead, Al Qaeda has not been decimated. In fact, it's grown or "evolved" as Obama argues and recent attacks in western cities like Paris and Copenhagen display their comeback.
But the President touting a victory about core Al Qaeda isn't the most bizarre part of the piece. Further down, Obama claims those engaging in violent extremism have "legitimate grievances" that must be addressed.

Governments that deny human rights play into the hands of extremists who claim that violence is the only way to achieve change. Efforts to counter violent extremism will only succeed if citizens can addresslegitimate grievances through the democratic process and express themselves through strong civil societies.

What, exactly, does Obama mean when he says "legitimate grievances"? The grievances Al Qaeda and ISIS hold are against infidels and Muslims who don't go far enough to wage jihad on the West. These "grievances" aren't economic, despite what the State Department would like us to believe.
And finally, despite admitting he isn't aware of all the facts, President Obamaimplies that the three Muslim students shot dead in Chapel Hill last week were killed as a result of their faith. The killer was an atheist who was enraged over a parking dispute.

We do not yet know why three young people, who were Muslim Americans, were brutally killed in Chapel Hill, N.C. But we know that many Muslim Americans across our country are worried and afraid.

The summit on generic violent extremism kicked off yesterday and will continue throughout the week at the White House.
This post has been updated with an additional block quote.

Fight Against Extremism a Battle for 'Hearts and Minds': Obama
Inform

Posted by theodore miraldi at 3:48 PM