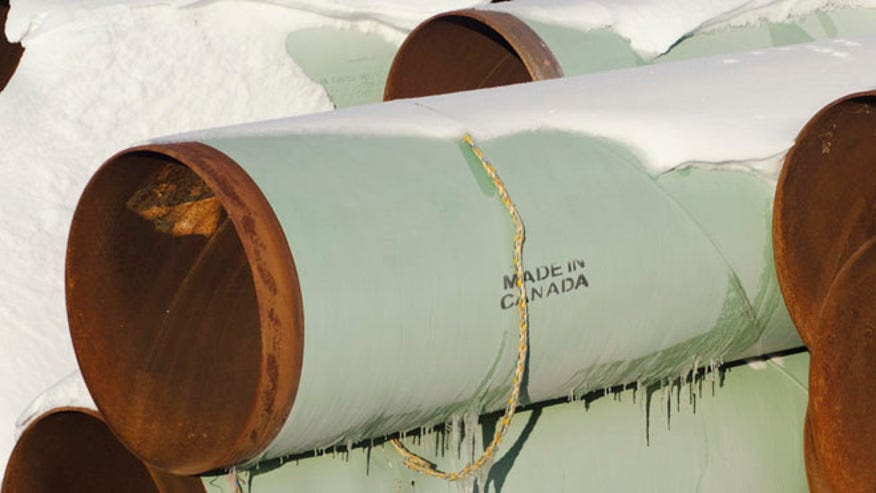 FILE: November 14, 2014: A depot used to store pipes for Transcanada Corp's planned Keystone XL oil pipeline is seen in Gascoyne, North Dakota. (REUTERS)
President Obama on Tuesday followed through on his vow to veto bipartisan-backed legislation authorizing the Keystone XL pipeline, marking his first veto of the Republican-led Congress and only the third of his presidency.
The president, in a brief statement, claimed the bill would "circumvent" the existing process for reviewing the pipeline, which would extend from Canada to Texas.
"The Presidential power to veto legislation is one I take seriously," Obama said. "But I also take seriously my responsibility to the American people. And because this act of Congress conflicts with established executive branch procedures and cuts short thorough consideration of issues that could bear on our national interest -- including our security, safety, and environment -- it has earned my veto."
The decision, while expected, was met with tough criticism from Republicans -- and tees up another showdown with Congress in the coming days as GOP leaders try to override.
"It's extremely disappointing that President Obama vetoed a bipartisan bill that would support thousands of good jobs and pump billions of dollars into the economy," Senate Majority Leader Mitch McConnell, R-Ky., said in a statement. "Even though the President has yielded to powerful special interests, this veto doesn't end the debate."
House Speaker John Boehner, R-Ohio, called the veto a "national embarrassment."
McConnell's office said the Senate plans to vote on overriding sometime before March 3.
But so far, congressional leaders have not demonstrated they have the votes to override, which takes a two-thirds majority in both chambers.
The Keystone bill garnered 62 yeas in the Senate, but they would need 67 to override. In the House, the bill got 270 votes -- but they would need 281 to override.
It remains unclear whether moderate lawmakers could be swayed to switch in the coming weeks.
While Tuesday's veto marked only the third of Obama's presidency -- fewer than any U.S. president since the 19th century -- his sparing use of the presidential tool is likely to change. With Republicans now in control of Congress, their efforts to chip away at the president's health care law and other legislative accomplishments are just as likely to be met with Obama's veto pen.
To date, Obama rarely has used the veto in part because Democrats for six years controlled at least one chamber in Congress -- acting as a buffer to prevent unwanted bills from ever reaching the president's desk. That buffer is now gone.
A look back at past presidencies, especially where control of the White House and Congress was split during at least one point, shows far more liberal use of that presidential power.
In the Clinton presidency, the president issued 37 vetoes in his two terms. President Ronald Reagan issued 78. President George W. Bush issued 12. His father issued 44.
Not since the Warren G. Harding administration has the number of vetoes been in the single digits; Harding issued six.
The Keystone bill is as contentious an issue as any for Obama to fire his first veto shot of the new Congress.
First proposed in 2008, the Keystone pipeline would connect Canada's tar sands to Gulf Coast refineries.
The White House has said repeatedly it would wait to make its decision about whether to let the project go forward until after a State Department review. It regards the legislation as circumventing that process.
The Associated Press contributed to this report.
http://www.foxnews.com/politics/2015/02/24/obama-to-usher-in-new-phase-presidency-with-keystone-veto/
Posted by theodore miraldi at 5:00 PM