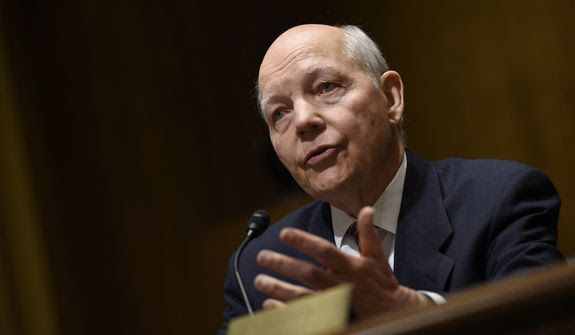 
The White House told Congress last week it refused to dig into its computers for emails that could shed light on what kinds of private taxpayer information the IRS shares with President Obama’s top aides, assuring Congress that the IRS will address the issue — eventually.
The tax agency has already said it doesn’t have the capability to dig out the emails in question, but the White House’s chief counsel, W. Neil Eggleston, insisted in a letter last week to House Committee on Ways and Means Chairman Paul Ryan that the IRS would try again once it finishes with the tea party-targeting scandal.
“It is my understanding that in May 2014, Commissioner Koskinen responded to this request by indicating that the IRS would be able to address new topics such as these following its completion of document productions already in progress,” Mr. Eggleston wrote in a Feb. 17 letter. “To the extent that the committee continues to have an oversight interest in this matter, I encourage you to continue working with the IRS to address those questions.”
But IRS Commissioner John Koskinen’s letter last year didn’t say that. Instead Mr. Koskinen said the IRS was logistically incapable of performing the search because it would have required combing through 90,000 email accounts.
The White House’s stiff-arm comes even though it performed a similar kind of email search in the past after the IRS lost thousands of emails of former division chief Lois G. Lerner, a key figure in the tea party targeting.
Mr. Ryan is trying to figure out whether the laws that govern taxpayer information security are working, which is part of his committee’s jurisdiction.
The IRS has been under fire for years over several scandals, including its targeting of tea party groups for politically motivated scrutiny and its illegal release of private taxpayer information concerning the National Organization for Marriage. The IRS insisted the disclosure was accidental and not politically motivated, but it did pay a settlement to the organization.
Some outside pressure groups argue the IRS’s improper behavior goes further, and includes disclosing private taxpayer information to the White House. The groups point to comments by a top White House economic adviser who in 2010 said Koch Industries, the company run by conservative billionaires Charles and David Koch, paid no corporate income taxes.
The IRS’s inspector general investigated that issue, but has refused to release documents and currently faces a Freedom of Information Act lawsuit over the matter.
Both the House and Senate are now investigating IRS and White House communications as well.
The White House didn’t assert any privileges in refusing Mr. Ryan’s request last week, instead insisting the IRS would work on it, so there was no need for the president to get involved. That conflicts with Mr. Koskinen’s 2014 letter making clear he didn’t think such a search was feasible from his end.
The IRS didn’t respond to a message seeking comment on whether it had rethought its stance in light of the White House’s promise, and the White House didn’t respond to a message asking why its chief counsel had misrepresented the IRS’s position as stated in Mr. Koskinen’s letter.
Congress and the White House faced a similar situation last year after the IRS admitted it had lost some of Ms. Lerner’s emails. The Ways and Means Committee then asked the White House if it had any such emails, and Mr. Obama’s aides complied with that request, even providing three emails thatCongress hadn’t asked for.
At the time Mr. Eggleston also acknowledged the IRS had told the White House about the lost emails a month before the tax agency informed Congress of the loss.
Any official requests for private taxpayer information made by the White House are supposed to be personally signed by the president, and Congress’s Joint Committee on Taxation is supposed to be notified of the request. The JCT issues an annual report on all requests for IRS information, and those reports don’t show any such requests from the president during Mr. Obama’s time in office.
Mark W. Everson, who was commissioner of the IRS under President George W. Bush from 2003 to 2007, said both sides try to observe a strict division.
“I can’t remember this ever having come up — at least it ever having been brought to my attention,” he said. “In my experience the White House and the service were scrupulous about making sure appropriate independence was maintained between the two.”
Mr. Everson said he recalled one or two times when he got a call from a White House staffer asking about the status of something, such as a charitable organization’s application. He urged them to go to the White House counsel’s office for guidance, and said he never heard any follow-up on the requests.
Mr. Koskinen, the current IRS commissioner, has told Congress he is working in good faith to restore trust in his agency and to cooperate with lawmakers’ investigations, which he says have cost millions of dollars in staff time and additional computer capacity.
The tax agency has turned over hundreds of thousands of pages of documents in the tea party investigation, and congressional committees, including Ways and Means, are trying to finalize their reports on the wrongdoing.
In his letter to Mr. Ryan last week, Mr. Eggleston said the IRS would tackle the new request after the agency finishes with the tea party matter.
Read more: http://www.washingtontimes.com/news/2015/feb/22/irs-taxpayer-information-sharing-probe-stiff-armed/#ixzz3SZnDFTdX Follow us: @washtimes on Twitter
Posted by theodore miraldi at 8:57 AM