Army Sgt. Bowe Bergdahl, who was captured by the Taliban after abandoning his post in Afghanistan and then freed five years later in a controversial trade for five Guantanamo detainees, was charged Wednesday with desertion.
U.S. Army Forces Command announced the decision at Fort Bragg in North Carolina.
The development comes 10 months after his May 2014 release -- which initially was a joyous occasion, with his parents joining President Obama in celebrating the news in the Rose Garden. Bob Bergdahl, who had studied Islam during his son's captivity, appeared with a full beard and read a Muslim prayer, while Bergdahl's mother Jani embraced the president.
But that euphoria quickly gave way to controversy in Washington as Bergdahl was accused of walking away from his post and putting his fellow soldiers in danger. The trade of hardened Taliban fighters for his freedom raised deep concerns on Capitol Hill that the administration struck an unbalanced and possibly illegal deal.
Bergdahl was specifically charged Wednesday with desertion and misbehavior toward the enemy. The charges carry a maximum sentence of life in prison.
Bergdahl 28, walked away from his post in Afghanistan and was captured, then released years later by the Taliban in the controversial prisoner exchange.
Gen. Mark Milley, head of U.S. Army Forces Command at Fort Bragg, has been reviewing the massive case files and had a broad range of legal options, including various degrees of desertion charges. A major consideration was whether military officials would be able to prove that Bergdahl had no intention of returning to his unit -- a key element in the more serious desertion charges.
The announcement marks a sharp turnaround for the administration's narrative of Bergdahl's service and release. After the swap last year, National Security Adviser Susan Rice said Bergdahl served with "honor and distinction." 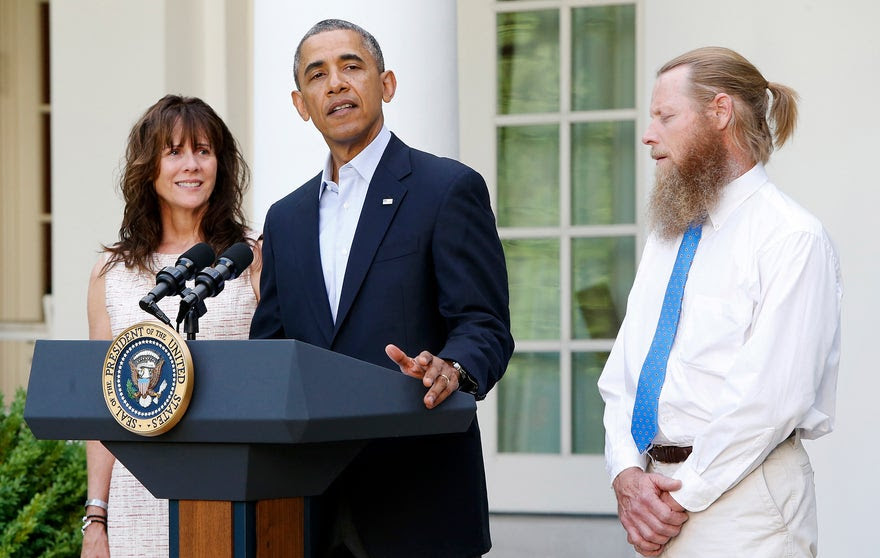 Expand / Contract
President Obama stands with Bob Bergdahl (R) and Jami Bergdahl (L) as he delivers a statement about the release of their son, prisoner of war U.S. Army Sergeant Bowe Bergdahl, in the Rose Garden at the White House in Washington May 31, 2014. (Reuters)

But as Bergdahl faced criticism from fellow servicemembers for his actions, the administration faced heated complaints from Congress over the Taliban trade itself.
"This fundamental shift in U.S. policy signals to terrorists around the world a greater incentive to take U.S. hostages," said former Rep. Mike Rogers, R-Mich., then the chairman of the House Intelligence Committee.
Bergdahl disappeared from his base in the eastern Afghanistan province of Paktika on June 30, 2009. A private first class at the time, he had three days earlier emailed his parents expressing disillusionment with the war.
"The future is too good to waste on lies," Bergdahl wrote, according to the late Rolling Stone reporter Michael Hastings. "And life is way too short to care for the damnation of others, as well as to spend it helping fools with their ideas that are wrong. I have seen their ideas and I am ashamed to even be American."
Bob Bergdahl, a former UPS delivery driver in Sun Valley Idaho, replied with a message bearing the subject line, "OBEY YOUR CONSCIENCE!"
Bergdahl left a note in his tent that said he was leaving to start a new life and intended to renounce his citizenship, Fox News reported last year.
For the next five years, Bergdahl is believed to have been held by the Taliban and Pakistan's infamous Haqqani network. In one of several hostage videos released during his captivity, he said he was captured when he fell behind a patrol, but fellow soldiers, outraged after the trade was made with the Taliban, accused him of deserting. Some asserted that American servicemembers' lives were put at risk in the hunt for Bergdahl.
Bergdahl was freed on May 31, 2014, after the White House agreed to trade five high value Taliban operatives held at Guantanamo Bay for him. He was turned over to Delta Force operatives in eastern Afghanistan, near the border village of Khost, while the Taliban members were handed over to authorities in Qatar, which helped broker the swap.
The trade was branded as illegal by lawmakers, who said they weren’t advised beforehand, It was also blasted by critics who said it violated America’s longstanding tradition of not negotiating with terrorists, and from Bergdahl’s fellow soldiers, many of whom view him as a traitor.
There were also concerns – which would prove well-founded – that the Taliban members would return to the fight against the West. Of the five, Mohammad Fazl, the former Taliban army chief of staff; Khairullah Khairkhwa, a Taliban intelligence official; Abdul Haq Wasiq, a former Taliban government official; and Norullah Noori and Mohammad Nabi Omari, at least three have attempted to rejoin their old comrades, sources told Fox News.
Then-Defense Secretary Chuck Hagel said Bergdahl was a “prisoner of war,” and that the deal did not amount to negotiating with terrorists. He also said concerns about Bergdahl’s deteriorating condition made it imperative that the U.S. move quickly to make the trade.
A Pentagon probe concluded in 2010 that Bergdahl had walked away from his base, but stopped short of accusing him of desertion, reopening the probe after his return.
Bergdhal was promoted to sergeant while in captivity, and had accrued more than $200,000 in back pay by the time he was freed. He was assigned to duty at Fort Sam Houston in San Antonio, Texas, after his return and reportedly refused to speak with his parents.
Fox News' Jennifer Griffin and Chad Pergram and The Associated Press contributed to this report.
http://www.foxnews.com/politics/2015/03/25/bergdahl-to-be-charged-with-desertion-official-says/
Posted by theodore miraldi at 4:19 PM