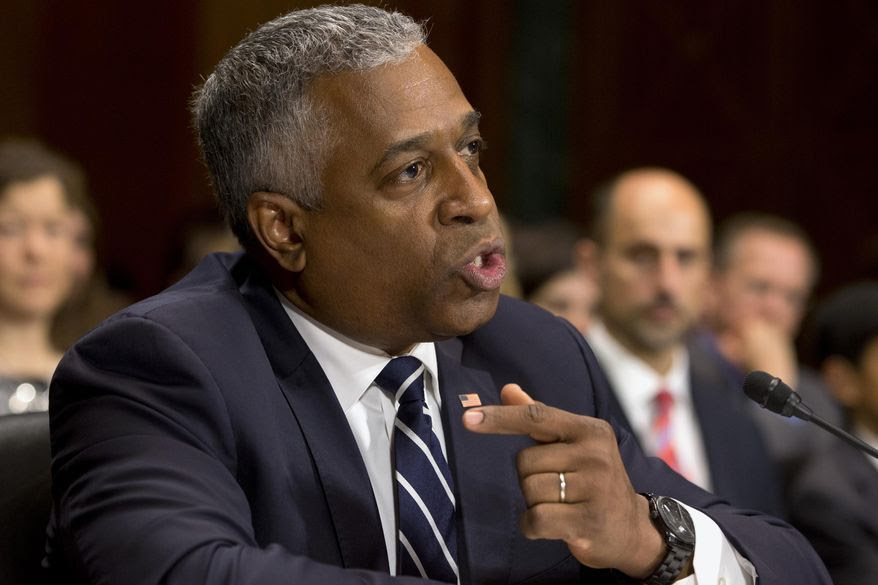 By Phillip Swarts
B. Todd Jones, the director of the Bureau of Alcohol, Tobacco, Firearms and Explosives, announced he is stepping down Friday after nearly four years on the job.
His announcement comes following a controversial ATF proposal to ban certain bullets that could pierce bullet-proof vests and be fired from an AR-15 rifle. But public outcry and Congressional pressure led the agency to abandon its efforts.
“ATF employees are hard-working, dedicated individuals who serve the public to make our nation safer every day,” Mr. Jones said in a statement. “I have seen firsthand their extraordinary commitment to combating violent crime, ridding the streets of criminals, and leveraging all available resources to keep our communities safe.”
Attorney General Eric Holder called Mr. Jones “an exemplary leader, a consummate professional, and an outstanding public servant.”
“As a result of Todd’s leadership, ATF has built a proactive, creative and effective team that is well-prepared to drive the agency into the future,” Mr. Holder said.
Mr. Jones, 57, assumed acting directorship of the ATF in August 2011, faced with the responsibility of reforming the agency following the Fast and Furious gunwalking scandal that let U.S. government-bought weapons fall into the hands of Mexican drug cartels and led to the death of a U.S. Border Patrol agent.
Though tensions with conservative members of Congress continued, Mr. Jones was widely viewed at having been successful in reforming some parts of ATF culture, and in 2013 was confirmed by the Senate to become the director.
Mr. Jones is also a former Marine who was active during Operation Desert Storm.
The ATF announced that deputy director Thomas Brandon would serve as the acting director following Mr. Jones‘ departure. Mr. Brandon has been with the ATF since 1989.
Rep. Bob Goodlatte, Virginia Republican and chairman of the House Judiciary Committee, said the agency “needs a change in leadership to repair its tarnished image.”
“Under [Mr. Jones‘] leadership, many of those responsible for Fast and Furious never faced any consequences for their actions,” Mr. Goodlatte said in a statement. “Jones was also the director when ATF conducted a series of disastrous store front sting operations where individuals with mental impairment were possibly exploited by ATF agents among other questionable tactics.”
Sen. Chuck Grassley, Iowa Republican and chairman of the Senate Judiciary Committee, echoed Mr. Goodlatte’s comments.
“There’s no question he took the reins of the ATF during a time of great turmoil following the Fast and Furious scandal, but it appears that he failed to address many of those problems,” Mr. Grassley said. “I look forward to seeing the ATF once again regain its footing in its own ranks and with the American people.”
Mr. Jones was the first director to be confirmed in the agency’s history since the position was changed in 2006 so that it required Senate approval.
But Carl Tobias, a law professor at the University of Richmond, said it’s unlikely President Obama would get another ATF director confirmed before he leaves office in 2016.
“It may not be a good sign for the ATF director that it’s taken so long to confirm or vote on the nominee for attorney general,” Mr. Tobias said.
The ATF’s mandate may not be as broad as the attorney general’s, Mr. Tobias said, “but it certainly sparks a lot of controversy, so it may be tough to get someone confirmed.”
Liberal think tank Center for American Progress hailed Mr. Jones‘ tenure, saying the ATF had benefited from his strong leadership.
“Across our country every month, nearly 1,000 Americans are murdered by assailants using guns at rates far above those of peer nations,” said Chelsea Parsons, CAP’s vice president of Guns and Crime Policy. “The scope of gun violence in this country warrants vigorous federal law enforcement efforts in partnership with local law enforcement.”
Read more: http://www.washingtontimes.com/news/2015/mar/20/b-todd-jones-quits-atf-director-amid-backlash-over/#ixzz3V1nxjz7G Follow us: @washtimes on Twitter
Posted by theodore miraldi at 9:54 AM