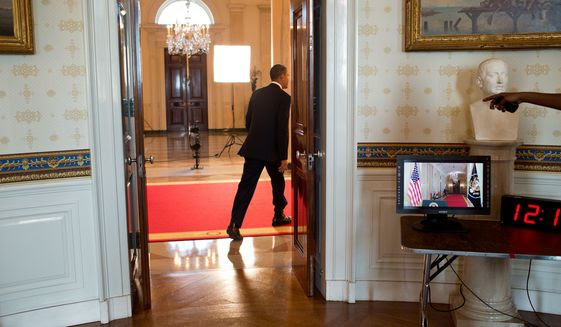 President Barack Obama walks through the Cross Hall of the White House before delivering a statement about the Supreme Court’s ruling on the “Patient Protection and Affordable Care Act,” June 28, 2012. (Official White House Photo by Pete Souza)
By Stephen Dinan

The heady sense of victory immigrant rights activists had last

amnesty has faded in recent weeks as the advocates sense

they’ve lost ground among the very Democratic leaders they

were counting on to deliver at the national and state levels.
The latest blow came over the weekend in New York,

where Gov. Andrew Cuomo has scrapped plans for a state

as part of the budget — spawning a hunger strike from

young illegal immigrants who expected him to come through.
Nationally, meanwhile, Mr. Obama is taking fire after his

pastor with American citizen children who had been living

without authorization for years, but who came to agents’

attention because of a drunken driving conviction from the

himself laid out in November, when he said he wanted to

kick out “felons, not families.”
“It goes to who really are our champions. That’s disillusioning

a lot of the electorate,” said Cesar Vargas, co-director of the

people believe that Republicans have a Latino problem.

Well, Democrats are definitely facing a Latino problem that

many of them aren’t even aware of.”
The relationship between the president and immigrant rights

advocates has always been rocky, dating back to his vote as

a senator to build the border fence, and then extending to

his failure to make good on his campaign promise to tackle

immigration reform his first year in office.
Mr. Obama had appeared to smooth things over in

November when he bypassed Congress and announced

and work permits to millions of immigrants in the country

enforcement priorities that were supposed to lower the

chances of deportation for millions of other illegal immigrants

— though they would not be eligible for the work permits

included in his broader amnesty.
Buoyed by that success, and by polls that suggest the public

activists turned to states, pressing for legislation to grant in-

state tuition to illegal immigrants, known as the Dream Act.
New York was a particular target, with a Democratic governor

in Mr. Cuomo vowing to use the state budget to make it


In the span of a few weeks, however, Mr. Obama’s

immigration policy was halted by a federal judge, his agents

was sent to his native Honduras on March 20 — and Mr.

Cuomo failed to secure passage of the Dream Act in New

York.
“I would definitely agree that there’s some deep

Immigration Coalition.
Mr. Castro said they will have to wait for more details about

the New York negotiations to come out before knowing

where the agreement broke down — though early press

a deal that would have coupled the Dream Act to an

education tax credit.
But the loss of the Dream Act goes to the heart of the

immigrants brought to the country as children, are viewed as

the most sympathetic figures in the debate.
Denise Vivar, one of the students on a hunger strike to

protest the governor’s retreat, said her last meal was March

24. Since then she’s been subsisting on water while working

the middle of midterm exams.
She said they were excited when Mr. Cuomo put the Dream

Act in his budget, and realized he ran into political opposition

from Republicans in the legislature. But she said activists

would have liked to see him push harder to win.
“It’s always, ‘Yeah, we care about Dreamers, and we want

them to be fully part of U.S. society,’ but when it comes to

the real deal, they always end up abandoning us,” she said.
Even as New York was stumbling over the Dream Act,

several other states are facing debates over whether to

repeal their own state-level laws.
The legislature in Texas, which was the first state to adopt in-

state tuition rates for illegal immigrants in a bill signed by

then-Gov. Rick Perry, is poised for a committee-level debate

on repeal next week, and Kansas’s legislature has also

toyed with a repeal.
At the national level, activists are eyeing Mr. Obama’s

deportation statistics and questioning how he’ll carry out

removals even as the court cases continue.
Mr. Vargas called the deportation of Mr. Villatoro “a promise

broken,” and said advocates will be watching the rhetoric in

the emerging 2016 campaign for clues to see which party is

making a claim for votes within his community.
Read more: http://www.washingtontimes.com/news/2015/mar/30/immigration-activists-disillusioned-with-obama-dem/#ixzz3Vyjjg6OI Follow us: @washtimes on Twitter
Posted by theodore miraldi at 11:47 AM