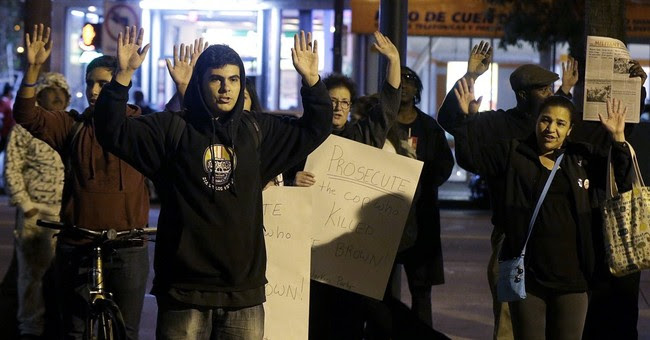 
Almost seven months after the fateful, fatal encounter between Michael Brown and former Ferguson Police Officer Darren Wilson, Attorney General Eric Holder officially announced a truth he had been holding close for months – that the “Hands Up, Don’t Shoot” mantra that had been used since August was based on a lie. The lie was widely embraced by the media, public officials, and some with celebrity status. We witnessed not only protesters in the streets, but Rams players, members of Congress, and CNN ‘journalists’ in ‘hands up’ poses.
The lie of ‘hands up, don’t shoot’ concealed deeper truths, truths all too common in America – that Michael Brown was yet another young black male engaged in serious crime and who invited a deadly encounter with a police officer who was merely doing his job. The vastly disproportionate involvement of young men of color as both victims of crime and as offenders had yet again materialized as a deadly specter, opening the door to the harder conversation on race and policing that the superficial ‘hands up’ chant did nothing to resolve.
As some commentators questioned use of the mantra while facts of the fatal encounter were yet unknown to the media and public, a few protesters recognized the risks of the lie being exposed and by late fall the phrase, “Black lives matter,” found its way into the protesters’ messaging. Their assertion begins with an assumption, of course, that law enforcement, or worse, the public at large, don’t believe they do.
Earlier this week, a small handful of journalists, including the Washington Post’s Jonathan Capehart, have begun admitting complicity in furthering the “hands up” myth. Capehart wasn’t alone in the media’s eager acceptance of the patently false and misleading attempts of too many Ferguson “witnesses” to build the lie and fan the flames that would follow it. He’s likely to be more alone in admitting his journalistic failings as acceptance of responsibility for biased reporting is hardly a media strength in current times.
So where do we go from here?
For some, immediately to the next half-truth – the new mantra – ‘Black lives matter.’
Grouping only what serves their narrative, the protesters with a gleaming new chant, once again fail to recognize the limitations of their cause – that far more black lives are lost at the hands of other blacks than are lost in the narrow battle they protest so loudly against.
Although the networks, cable news, and print journalists aren’t, we must ask where were the BLM protesters after so many other black lives were taken in the last few months?
Where were they when a Ferguson, 6-year-old Marcus Johnson, who had just survived open heart surgery, was killed on his way home from a park after stray bullets – shot during an altercation among adults over a traffic dispute – struck him and injured his teenage brother and a 69-year-old passenger in their vehicle.
Where were they on March 2, when Deonte Hoard, was shot and killed walking home from school in Chicago? He died just one week short of his 18th birthday. Where were they when more than three dozen other black lives have been taken by homicide in Chicago in the first three months of 2015?
Where were they when deputy US Marshal Josie Wells, was shot and killed during an attempt to arrest a fugitive in Baton Rouge, just as he and his wife were expecting their first child. Or after Philadelphia Police Officer Robert Wilson IIIwas gunned down by two brothers during an attempted store robbery earlier this month.
Do any of these black lives matter or does their loss simply not serve the new refrain?
Where was the media coverage of these horrific deaths? Where was Capehart orThe Post, CNN, or any single one of the members of Congress who put on their various displays of leadership? Where were the White House representatives at the funerals?
Why is there simply no outcry for the more than 7,000 black men, women and children murdered every year – whose lives, indeed, matter?
http://townhall.com/columnists/kenblackwell/2015/03/29/extending-the-lie-n1977826/page/full
Posted by theodore miraldi at 10:49 AM