'Designed to enrich themselves personally at expense of American people' 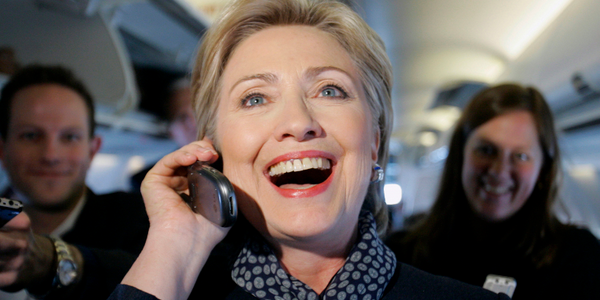 A Washington watchdog and gadfly has filed a lawsuit over Hillary Clinton’s hidden emails, charging that her actions, in combination with those of her husband, Bill Clinton, and their family foundation, amount to violations of the Racketeer Influenced and Corrupt Organization Act.


The action from Larry Klayman, founder of FreedomWatch, was filed in the U.S. District Court for the Southern District of Florida Tuesday.

Klayman for years has been a Washington watchdog, having engaged Bill Clinton in court battles during his presidency. He’s also taken on terror interests and foreign influences in the United States, and just over the last year or so has won a federal court judgment against the National Security Agency’s spy-on-Americans program as well as bringing a case against Barack Obama over his amnesty-by-executive-memo strategy.
The new lawsuit alleges that over the last decade or so, the Clintons have participated in several “acts” that constitute a “criminal enterprise” that was designed to enrich them.
According to Klayman, the Clintons, through mail and wire fraud and false statements, misappropriated documents which he was entitled to receive and possess under the Freedom of Information Act regarding Hillary Clinton’s involvement in releasing Israeli war and cyber-warfare plans and practices.
Hillary Clinton orchestrated this release to harm and thwart Israeli plans to preemptively attack Iranian nuclear sites to stop the Islamic nation’s march to producing atomic weapons, according to Klayman.
The claim also explains Klayman used the nation’s FOIA to try to get details from the State Department regarding waivers to do business with Iran – “acts [that are] alleged to be the result of the defendants selling government influence in exchange for bribes from interests which have donated to The Clinton Foundation, paid huge speaking fees to the Clintons and other means.”
There was no immediate response to a WND request to the combined New York office for Bill Clinton and the foundation for a comment.
The current scandal over Hillary Clinton’s emails as secretary of state – she set up a private server in her home, avoiding government paths that are archived, and then reportedly destroyed tens of thousands of emails without any overnight – “is alleged to cover up” evidence of crimes, Klayman explained.
“This is the first and only hard-hitting case to address the growing email scandal. What Hillary Clinton, her husband, and their foundation have done is nothing new. It is simply part of a criminal enterprise which dates back at least 10 years, all designed to enrich themselves personally at the expense of the American people and our nation. It’s time, however, that they finally be held legally accountable,”  Klayman said.
The Clintons’ foundation also has been embroiled in scandal recently, with details being revealed about how foreign interests made donations to the Clinton-controlled organization during Hillary Clinton’s tenure as a senior government official.
“Defendants have systematically and continuously, over the last ten (10) years and more, conducted a corrupt enterprise in violation of the Racketeer Influenced and Corrupt Organization Act,” the filing claims, “all of which acts are continuing in nature.”
“Plaintiff sues the defendants, as individuals operating a criminal enterprise, for violating plaintiff’s statutory rights to obtain documents under the Freedom of Information Act … for violating plaintiff’s due process rights, vested property rights, constitutional rights, and for misappropriating property,” the filing says.
The complaint explains, “Plaintiff has filed many Freedom of Information Act requests for public records created or held by the U.S. Department of State … which records are of the public interest and importance to the citizens of the United States. … As it has now been revealed, a primary reason that the plaintiff did not receive the records to which the plaintiff is entitled by law is that Defendant Hillary Clinton – upon information and belief together with Cheryl Mills and Defendant Bill Clinton and other Clinton ‘loyalists’ – set up a private computer file server operating a private, stand-alone electronic mail system.”
It alleges Clinton’s “off the books” plan “concealed from the plaintiff public records to which the plaintiff was entitled to under the FOIA Act.”
It continues, “Using those concealed communications held on the private email server, upon information and belief, the defendants negotiated, arranged and implemented the sale of influence and access to U.S. government officials and decision-makers and official acts by State and other instrumentalities of the U.S. government in return for gratuitous and illegal payments – bribes – disguised as donations to defendant The Clinton Foundation and extraordinarily high speaking fees paid to Defendant Bill Clinton and Defendant Hillary Clinton.”
It has been reported many times the millions of dollars that have been paid to the Clintons for speaking fees, and Klayman’s case estimates the Clintons have “amassed a personal fortune (outside of The Clinton Foundation) of over $105 million” from those fees.
The case charges, “defendants have misappropriated – that is, stolen – the documents which are U.S. government property under relevant records management and archive laws governing U.S. government officials.”
Klayman pointed out that Hillary Clinton “lied to the lower court” in affirming that there were “no responsive documents” to his information requests, because the private email server was not searched.
“The concealment of approximately 62,490 emails to and from the secretary of state directly harmed the plaintiff in the availability of the most relevant and the most important records of State,” Klayman wrote, adding, “Hillary Clinton destroyed the email records after many congressional subpoenas and a flurry of FOIA requests from various requesters, including plaintiff, had already been issued.”
He complains that the emails likely were concealed “in large part because she was using email communications to arrange donations to defendant The Clinton Foundation and large speaking fees to defendants Bill Clinton and Hillary Clinton in return for official government actions, policies, statements, and/or access to and from State, the U.S. Senate, U.S. House of Representatives or other parts of the U.S. government, and arranging other political benefits using the leverage of her official position.”
The case claims the Clintons’ actions date back to the 1990s when then-President Defendant Bill Clinton “approved the sale of nuclear technology to China.”
It seeks an order that Hillary Clinton’s computer server be seized and examined, its contents be revealed, orders for the production of records, and other RICO penalties, including $5 million compensatory and $200 million punitive damages.

Read more at http://www.wnd.com/2015/03/hillary-emails-part-of-criminal-enterprise/#dAeCR9qiG58mTEth.99
Posted by theodore miraldi at 7:59 AM