HILLARY HAS HISTORY OF IRANIAN FUNDRAISING TO EXPLAIN

NEW YORK – As the U.S. presses for an agreement that could allow Iran to become a nuclear-weapons power, Hillary Clinton’s receipt of funds from the mullah-led Islamic regime and her hiring of a convicted Iranian-American multimillionaire with ties to Tehran as her national campaign finance director in 2008 could become an issue if she runs for president again.
The Bill, Hillary, and Chelsea Clinton Foundation accepted $30,000 between April 2005 and March 2006 and another contribution of between $25,000 and $50,000 in 2008 from the New York-based Alavi Foundation.
U.S. government prosecutors have identified the foundation as an arm of the Iranian government.
For her 2008 presidential campaign, Clinton hired Hassan Nemazee as her national campaign finance director, who was known for his efforts to normalize relations with the theocratic Iranian regime. In 2010, Nemazee pleaded guilty to running a Ponzi scheme in which he obtained $292 million in fraudulent loans.
Rachel Ehrenfeld, director of the American Center for Democracy, spelled out the problem with the Clinton Foundation receiving funds from the Alavi Foundation in a Jan. 5, 2009, article published by Forbes.
“Alavi’s contribution [in 2008] to Clinton came just two days after the Treasury Department also designated Alavi’s partner, the New York-based Assa Corp., as a terrorist entity, and the New York Southern District’s attorney seized and forfeited its assets,” Ehrenfeld wrote.
Then, in September 2013, Preet Bharara, the U.S. attorney for the Southern District of New York announced that U.S. District Judge Katherine B. Forrest had issued a decision granting summary judgment in favor of the United States’ claims for forfeiture of a 36-story Midtown Manhattan office building owned by the Alavi Foundation and Assa Corp.
The feds charged the building’s owners were “a front for the Iranian government” that had violated in conjunction with Bank Melli Iran the International Emergency Economic Powers Act, IEEPA, and federal money-laundering statutes.
In October 2007, Bank Melli was designated a terrorist funding organization under Executive Order 13382. Iran’s largest bank was providing services to Iranian entities involved in creating nuclear weapons and advancing Iran’s ballistic missile programs in conjunction with the Iranian Revolutionary Guards.
On April 19, 2014, the U.S. Justice Department agreed to distribute the proceeds of the Manhattan office building to victims of attacks by Iran-backed militants.
Hillary’s Iranian fundraiser
Hillary Clinton inherited Nemazee, the multimillionaire Iranian-American investment banker and top Democratic Party fundraiser, from John Kerry. In 2004, Nemazee served as the New York finance chairman for Kerry’s 2004 presidential campaign after serving as finance chairman of the Democratic Senatorial Campaign Committee.
image: http://www.wnd.com/files/2015/03/namazee.jpg 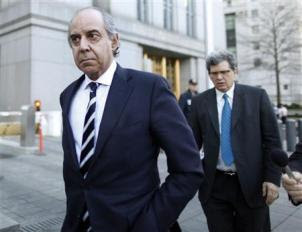 Hassan Nemazee leaves Manhattan Federal Court after pleading guilty to fraud in 2010.
During the 2004 presidential campaign, Nemazee’s history of urging the United States to normalize diplomatic relationships with the theocratic regime ruling Iran, despite Iran’s continued alleged pursuit of nuclear weapons, caused anti-mullah Iranian activists in the U.S. to accuse Nemazee of being an agent of the Iranian government.
On Oct. 18, 2004, WND attended a deposition in New York City in which Nemazee was questioned under oath by legal counsel for Aryo Pirouznia, the leader of the Student Movement Coordination Committee for Democracy in Iran.
Nemazee had sued Pirouznia in a $10 million defamation suit in which Nemazee charged that Pirouznia had defamed him by calling him an agent of the religious clerics ruling Iran.
Pirouznia had charged that Nemazee was utilizing his resources, including investment funds Nemazee managed in Nemazee Capital Corp., to further the interests of the religious rulers in Tehran in the formation of U.S. foreign policy toward Iran.
The lawsuit was ultimately settled out of court.
On Sept. 30, 2004, in the first nationally televised presidential debate with President George W. Bush, Kerry said the U.S. should provide nuclear fuel to Iran to test them and “see whether or not they were actually looking for it for peaceful purposes.”
It was basically the same strategy the Clinton administration tried with North Korean dictator Kim Il Sung in 1994 under an “Agreed Framework” in which the Clinton administration handed over to North Korea enough nuclear fuel to run two nuclear power plants.
After the delivery of the nuclear fuel by the Clinton administration, Kim withdrew from the Nuclear Nonproliferation Treaty and proceeded to make nuclear warheads for North Korea’s Nodong missiles.
On Aug. 25, 2009, federal law enforcement authorities in New York City arrested Nemazee as he was attempting to board a flight to Rome, Italy, at Newark Liberty International Airport in New Jersey and charged him with engaging in criminal fraud for his role in arranging a $74 million loan from Citibank.
U.S. Attorney Bharara in New York City and the FBI told Dow Jones Newswires the then-59-year-old Nemazee applied for the Citibank loans for Nemazee Capital Corp. by giving Citibank “numerous documents that purported to establish the existence of accounts in Nemazee’s name at various financial institutions containing many hundreds of millions of dollars.”
According to the criminal complaint released by Bharara, the accounts Nemazee submitted in the loan documentation were “fraudulent and forged” and “either never existed or had been closed years before Nemazee submitted the documents referencing those accounts.”
The complaint alleged Nemazee’s fraudulent scheme began in December 2006, when he first approached Citibank to borrow $25 million. He subsequently raised the sum to $80 million.
On March 2010, Nemazee, then 60, plead guilty in federal court to charges of fraudulently applying for and receiving some $292 million in loans as chairman of Nemazee Capital from Citicorp, Bank of America and HSBC. The proceeds were used to buy property in Westchester County, make campaign contributions to Democratic Party politicians, donate to charity and to support his lavish society lifestyle.
On July 15, 2010, U.S. District Judge Sidney H. Stein in the U.S. District Court for the Southern District of New York sentenced Nemazee to serve 12 ½ years in federal prison on multiple federal criminal counts of bank and wire fraud.
Nemazee’s history with Democratic Party politics stretches back to the Clinton administration.
In 1998, President Clinton nominated Nemazee to be ambassador to Argentina, a nomination Clinton withdrew after Forbes magazine published an extremely damaging review of Nemazee’s business career.
On May 3, 1999, Forbes wrote:“Over the past four years Nemazee and his family have given more than $150,000 to Democratic politicians and the DNC. Six of Nemazee’s friends and relatives have given $10,000 apiece – the maximum allowable per year – to Bill Clinton’s legal defense fund.”

Read more at http://www.wnd.com/2015/03/hillary-has-history-of-iranian-fundraising-to-explain/#CyTWQWemk6dXRyII.99
Posted by theodore miraldi at 5:39 PM