Iran ramps up sea power while negotiating nukes with West Commander of the Islamic Revolution Guards Corps Navy Rear Admiral Ali Fadavi has threatened the U.S. with the nation's navy, but it is more likely to be used in the Persian Gulf region. (Reuters)
While the U.S. haggles with Iran over nuclear weapons, the Islamic Republic is aggressively building up a navy -- a move that has regional neighbors concerned.
The focus on Tehran's nuclear weapons capabilities could be a mistake, if it comes at the exclusion of addressing the seafaring capabilities of the rogue regime, not to mention the active proxy fighting Iran is engaging in throughout the Middle East, a former U.S. Army officer with intimate knowledge of the Iranian military told FoxNews.com. And it isn't just analysts warning that Iran has plans to project power and influence around the Persian Gulf -- the nation's top military officials are rattling their sabers on a near-daily basis.
"The Americans and our enemies cannot stand up against the Islamic system's deterrence power no matter how hard they try,"  Navy Rear Adm. Ali Fadavi, Commander of the Islamic Revolution Guards Corps, told Iranian state-run media.
International sanctions have long stunted Iran's ability to buy weapons, but the nation has nonetheless managed to acquire and even build one of the world's largest naval fleets, according to the website GlobalFirepower.com. Earlier this month, Iran touted its “homemade destroyer," naval presence in international waters and "anti-surface and anti-subsurface weapons." In February, Iran stagedUSS Cole-style missile and rocket attacks on a mock-up of a U.S. aircraft carrier.
The U.S. 5th Fleet is based in Bahrain across the Persian Gulf from Iran.
“We were aware of an exercise by Iranian naval forces involving a mockup of a vessel similar to an aircraft carrier last month,” U.S. Defense Department spokesperson, Cmdr. Elissa Smith, told FoxNews.com. “We are confident in our naval forces' ability to defend themselves against any maritime threat.”

Iran’s naval headquarters is at Bandar Abbas, the southern coastal city on the Persian Gulf. Its frigates and destroyers are based there, and most of Iran’s higher-profile naval exercises have been launched from Bandar Abbas. The nation operates smaller bases on the Gulf and also has bases and its naval academy on the Caspian Sea, on Iran’s northern border.
Kenneth Pollack, a senior fellow in the Center for Middle East Policy at the Brookings Institution who testified on regional security during a March 24 Senate Armed Services Committee hearing, says Iran’s naval abilities include mines, missiles and traditional assets.
“There’s no question [Iran] can do some damage,” Pollack told FoxNews.com. But “that crazy exercise” does not prove Iran “is a serious threat to the United States.” 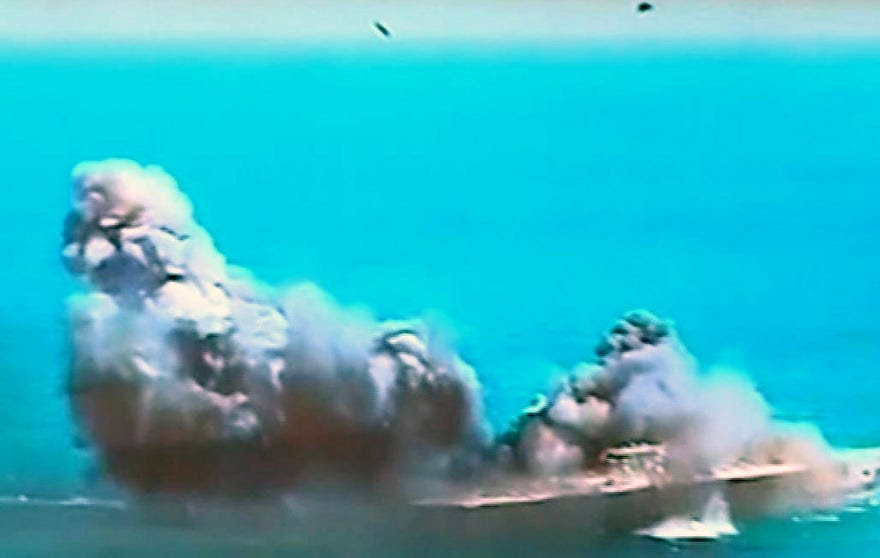 Expand / Contract
Image taken from Iranian state TV shows damage to a mock U.S. aircraft carrier during large-scale naval and air defense drills by Iran's Revolutionary Guard, near the Strait of Hormuz, on Feb. 25. AP Photo/Iran TV)
“The mock carrier didn’t fire back,” said Michael Connell, a senior researcher with the Iranian Studies Program at Arlington, Va.-based CNA Corporation.
Connell believes the strengths of Iran’s two parallel navies include their “asymmetric” military investments in small boats that could launch “problematic” attacks, and their use of mines and missiles. But he also worries about their regional influence.
“They are reasonably capable by regional standards,” he said. 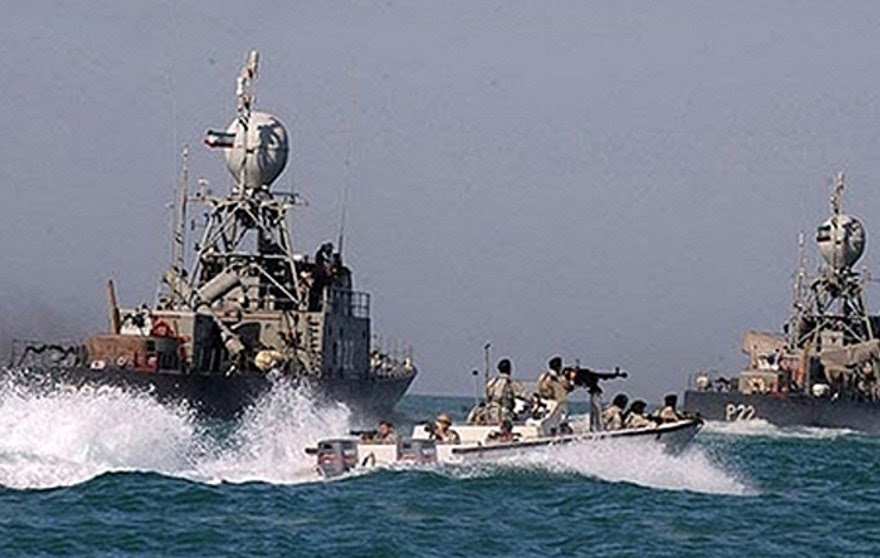 Expand / Contract
When the commander of Iran’s Northern Navy Fleet warned its shipes were headed to the U.S. last year, the world snickered. But Iran's navy is a regional threat, say experts. (FARS News Agency)
In February 2014, a top Iranian admiral warned that two Iranian warships were headed toward the U.S., a threat Adm. Afshin Rezayee Haddad said was in response to the ongoing presence of the U.S. Navy’s 5th fleet, which is based in Bahrain, across the Persian Gulf. But the British-built ships, which were reportedly carrying roughly 30 Iranian Navy academy cadets, likely never made it out of the Gulf, experts said.
Security experts say Iran’s conventional naval assets are no match for the U.S. and its allies. But American officials have pointed to Iran’s role in supporting the terrorist group Hezbollah in Lebanon, the Syrian government, Houthi rebels in Yemen and Shiite militias in Iraq as evidence of the country’s growing threat to the Middle East and the U.S.
“There is a dangerous delusion that Iran can be a force for good in the region,” Sen. John McCain, R-Ariz., said during Tuesday’s Senate hearing.
A spokesperson for McCain directed FoxNews.com to an earlier March joint statement with Sen. Lindsey Graham, R-S.C., in which the the two said:
“We cannot afford to treat Iran solely as an arms control challenge. Iran is a geopolitical challenge.”
The risk to regional security is among the greatest challenges Iran poses, according to Ilan Goldenberg, director of the Middle East Security Program at the Center for a New American Security and a former Defense Department advisor on Iranian nuclear, military and political issues.
“Their support for terrorism is a threat to regional security,” Goldenberg told FoxNews.com.
Goldenberg argues that while Iran’s nuclear program is a major concern, the U.S. should be doing more to address Iran’s other risks to the region and the world.
Iran’s nuclear program “is the most important challenge, but … we should be doing more to push back,” Goldenberg said.
http://www.foxnews.com/world/2015/03/26/iran-ramps-up-sea-power-while-negotiating-nukes-with-west/
Posted by theodore miraldi at 7:40 PM