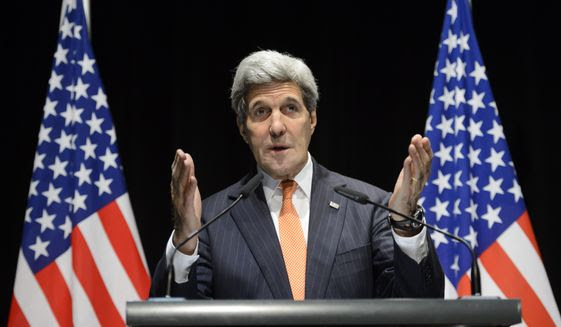 and Iran reported significant progress Saturday toward a

would meet a March 31 deadline.
Speaking after a week of nuclear negotiations in Switzerland,

“fundamental decisions” that prove to the world it has no

interest in atomic weapons. Amid conflicting statement by

officials about how close the sides were, Kerry said, “We

to try to get this right.”
The talks “have made substantial progress,” Kerry told

with Iran resume next week.
In Tehran, Iranian President

optimistic. “Achieving a deal is possible,” he said. “There is

nothing that can’t be resolved.”
Other negotiators offered both positive and negative

days that technical work was nearly done. But French

officials said the opposite, declaring the sides far from any

agreement.
Kerry was departing later Saturday to meet with European

allies in London, before returning to Washington

ensure unity. Kerry said the U.S. and its five negotiating

are “united in our goal, our approach, our resolve and our

, which raised last minute objections to an interim agreement reached with Iran in 2013, could threaten a deal again. It is particularly opposed to providing Iran with quick relief from international sanctions and wants a longer timeframe for restrictions on Iran’s nuclear activity.
On Twitter Friday, France’s ambassador to the U.S. called talk about needing a deal by March 31 a “bad tactic” that is “counterproductive and dangerous.” Gerard Araud called it an “artificial deadline” and said negotiators should focus instead on the next phase — reaching a complete agreement by the end of June.
Kerry said the U.S. wasn’t rushing into a pact, stressing that the latest stab at a diplomatic settlement with Iran has gone on for 2 ½ years. “We don’t want just any deal,” he said. “If we had, we could have announced something a long time ago.”
But, he added, decisions “don’t get any easier

as time goes by.”
“It’s time to make hard decisions,” Kerry said. “We want the right deal that would make the world, including the United States and our closest allies and partners, safer and more secure

. And that is our test.”
Washington has yet to say what it will do if talks miss the March deadline, but the stakes are high. The Obama administration has warned that a diplomatic failure could lead to an ever tougher dilemma: Whether to launch a military attack on Iran or allow it to reach nuclear weapons capacity

.
A more immediate challenge may be intervention from Congress. If American lawmakers pass new economic sanctions on Iran, the Islamic Republic could respond by busting through the interim limits on its nuclear program it agreed to 16 months ago. Thus far, it has stuck to that agreement.
Read more: http://www.washingtontimes.com/news/2015/mar/21/john-kerry-cites-substantial-progress-iran-nuke-ta/#ixzz3V25aHyGZ Follow us: @washtimes on Twitter
Posted by theodore miraldi at 11:05 AM