NLRB’s Griffin Forgets His Own Reforms 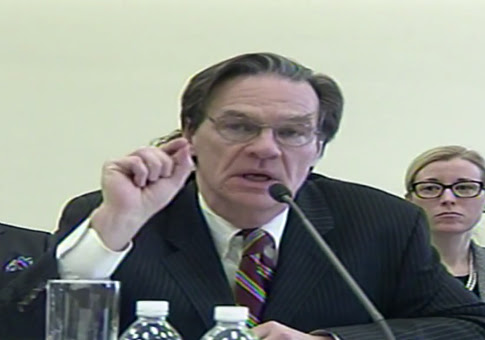 
President Obama’s top labor prosecutor fumbled questions about the agency’s proposed reforms to the union election process during a House Appropriations subcommittee hearing on Tuesday.
Richard F. Griffin, general counsel of the National Labor Relations Board (NLRB), “forgot” the timeline that employers will face under new NLRB guidelines that critics have dubbed “ambush election rules.” Rep. Andy Harris (R., Md.) asked Griffin to clarify how much time employers have to respond to union organization petitions.
“Let’s just pretend that the union—because it actually understands that this deadline’s sped up—files the petition Thursday before Labor Day, by your laws that hearing has to be next Friday, right? Eight calendar days,” Harris said.
“Business days. It’s business days,” said Griffin, a former union attorney with 34 years of experience.
“You sure? It says calendar days from that hearing,” Harris said, holding up testimony from a previous House hearing on the NLRB proposal.
Griffin turned to someone off camera asking for clarification. His microphone captured a male voice saying “I forget.”
“I’m sorry, my bad: calendar days,” Griffin said.
“Let me get it straight. The General Counsel of the NLRB got that critical question wrong. You had to turn around and get—I’m amazed,” Harris said. “I now understand why it’s called an ambush election.
Harris, a medical doctor, raised the question as Griffin and Mark Gaston Pearce, the NLRB’s chairman, appeared before the House Appropriations Subcommittee on Labor, Health and Human Services, Education and Related Agencies.
Congressional Republicans are debating legislation that would block the so-called “ambush election”rule from being enacted, and have also introduced legislation to change the agency’s funding structure in the past. Harris told the committee he was worried that small businesses would not have enough time to seek representation under a speedier election process.
“I imagine very few of them have in-house counsel, and I imagine none of them have in-house counsel that is actually specialized in NLRB law,” Harris said at the hearing.
A congressional source, who asked to remain anonymous in order to speak candidly, said that Griffin’s performance hurt the agencies.
“How does the NLRB expect small business employers to find counsel that specializes in labor issues in less than two weeks to represent them in a union election when they can’t answer simple questions about the rules they are putting in place?” the source said.
The NLRB’s proposal is expected to be implemented later this year.
http://freebeacon.com/issues/nlrbs-griffin-forgets-his-own-reforms/
Posted by theodore miraldi at 1:26 PM