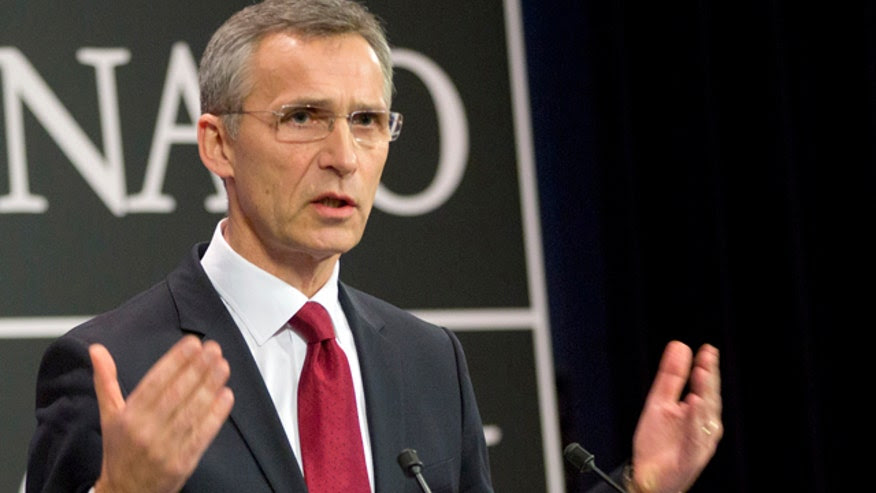 FILE - In this Feb. 5, 2014 file photo, NATO Secretary General Jens Stoltenberg speaks during a media conference at NATO headquarters in Brussels. (AP Photo/Virginia Mayo, File)
President Barack Obama reportedly will not meet with NATO's new secretary general when he is in Washington this week, despite requests from the alliance chief's staff for a get-together.
Bloomberg View reported Tuesday that Jens Stoltenberg's office requested a meeting with Obama in advance of his scheduled visit, but did not receive any response from the White House. Instead, Bloomberg View reported that Stoltenberg had to settle for a last-minute meeting with Defense Secretary Ashton Carter.
Stoltenberg is scheduled to be in Washington through Thursday, primarily so he can attend a strategic brainstorming session involving military officials and experts from the U.S and NATO.
Stoltenberg, who replaced Anders Fogh Rasmussen as head of the world's largest military alliance in October, was able to meet with Canadian Prime Minister Stephen Harper Monday, the day before Harper announced that Canada would expand its participation in the U.S.-led military campaign against ISIS in Iraq and Syria.
The report of Obama's snub comes amid Russia's growing willingness to test NATO's military readiness. On Tuesday, NATO jets were scrambled after four Russian military planes were spotted flying over the Baltic Sea with their transponders turned off. Over the weekend, a Danish newspaper published remarks by the Russian ambassador to Denmark in which he hinted that Russian missiles could target Danish warships if Copenhagen joins NATO's missile defense system.
But the most far-reaching example of Russian belligerence came Tuesday, when Britain's Daily Telegraph reported that Moscow was preparing to lease 12 long-range bombers to Argentina in exchange for shipments of beef and wheat. The report comes after a round of rhetoric from Russian officials questioning Britain's claim to the Falkland Islands.
The Telegraph reports that Russia's ambassador to Britain, Alexander Yakovenko, compared a 2013 referendum in which 99.8 percent of Falklands inhabitants voted to remain part of the U.K. to last year's vote which formalized Crimea's annexation by Russia. Britain, along with the U.S. and NATO, denounced the Crimea referendum as a sham orchestrated by Moscow.
British Foreign Secretary Philip Hammond repeated those claims earlier this week, prompting the Russian embassy to respond, "In its rhetoric [the] Foreign Office applies one logic to the referendum in the Malvinas/Falklands, and a different one to the case of Crimea."
Alexei Pushkov, the head of the Duma’s committee of international affairs, was even more blunt in a Twitter message that read, in part, "Crimea has immeasurably more reason to be a part of Russia than the Falkland Islands to be part of the U.K."
The Russian position echoed remarks made last year by Argentina president Cristina de Kirchner, who said, "The Malvinas [Argentina's name for the archipelago] has always belonged to Argentina, the same way that Crimea also belonged to the Soviet Union until it was given to Ukraine."
On Tuesday, British Defense Secretary Michael Fallon said that Britain would send two Chinook troop-carrying helicopters and a new surface-to-air missile system to the islands.
http://www.foxnews.com/politics/2015/03/25/obama-reportedly-snubs-nato-chief-as-russia-makes-new-threats-against-allies/?cmpid=NL_morninghl
Posted by theodore miraldi at 8:28 AM