DRAWS IRE OF BUSINESSES AND LAWMAKERS 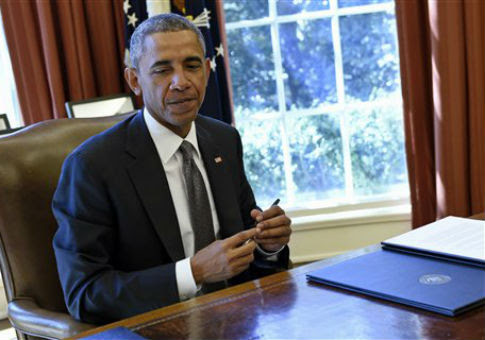 
President Obama vetoed a resolution that would have protected employers from proposed regulations speeding up union elections on Tuesday.
The Republican-controlled House and Senate approved resolutions in March to prevent the National Labor Relations Board (NLRB), the nation’s top labor arbiter, from implementing new union election rules, which would have eliminated a 25-day waiting period in the union election process. Obama said on Tuesday that the GOP resolution undermined the NLRB’s attempt to “streamline a democratic process that allows American workers to freely choose to make their voices heard.”
Congressional Republicans say that the ambush election rule does more to undermine the democratic process.
Unions and labor organizers spend months and sometimes years to get workers to sign petition cards to organize an election. Employers, meanwhile, are forced to play catch-up, educating workers on the potential downsides of union membership in the small window between the NLRB election petition and the election itself.
Rep. Phil Roe (R., Tenn.), chairman of the House Subcommittee on Health, Education, Labor, and Pensions, said the administration’s actions are rooted in rewarding political allies, rather than protecting workers.
“It is extremely disappointing the administration is moving forward with this misguided rule,” Roe said in a statement to the Washington Free Beacon. “I have been an outspoken opponent of the ambush election rule and remain concerned that President Obama is putting the interests of labor unions ahead of workers and employers. It is completely unacceptable and beyond frustrating.”
Business groups are equally vexed by the veto. The National Restaurant Associations said that Obama’s action tilts the scales in union elections, rather than producing the “level playing field” he called for on Tuesday.
“NLRB’s unnecessary overreach has already placed significant burdens on the restaurant industry and our nation’s employer community by narrowing the length of time between the filing of a union petition and an employee vote on unionization,” said Angelo Amador, who is regulatory counsel to the group and its senior vice president of labor and workforce policy. “This rule denies employees full and proper access to information, restricts employers’ rights to due process and proper time to address employee concerns and the ability to raise substantive issues and concerns.”
The NLRB is pushing ahead with the implementation of the regulations set to debut in April. The agency conducted training seminars on implementing the new rules at the headquarters of SEIU Local 32BJ in Manhattan on Thursday.
The NLRB has been criticized for not appreciating the hardships it is placing on small businesses.
Rep. Andy Harris (R., Md.) challenged Richard Griffin, the NLRB‘s general counsel and a longtime union lawyer, to justify the hastened union election process at a March 25 hearing for the House Appropriations Subcommittee on Labor, Health and Human Services, Education and Related Agencies.
When Griffin forgot his own agency’s recommended timeline for conducting union elections, Harris said that the agency should grant leeway to small businesses that may lack legal resources.
“The General Counsel of the NLRB got that critical question wrong. You had to turn around and get—I’m amazed,” Harris said. “I now understand why it’s called an ambush election.”
The National Restaurant Association’s Amador said in a statement that the White House has misplaced its priorities.
“The Administration should recognize that this is a hard day for America’s small businesses community as employers will have a difficult time responding and employees will have decreased access to education during union election campaigns,” he said.
The veto does not mean that the new regulations will necessarily survive. Two different lawsuits have been filed in federal court challenging the legality of the NLRB’s actions.
The regulations will go into effect on April 14.
http://freebeacon.com/issues/obama-vetoes-attempt-to-halt-ambush-elections/
Posted by theodore miraldi at 6:28 PM