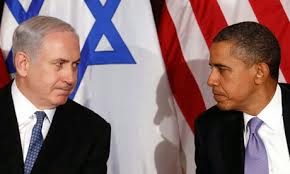 The candidate who captivated America with his promise to transcend partisan and racial rancor turned out to be the most consistently polarizing president in modern history. He hasn’t scrupled to inject barbed racial comments into the nation’s political discourse, but if he has ever candidly apologized for doing so, it must have been on deep background. Obama’s contempt for Netanyahu is nothing new, but before he lambastes other political leaders for their “divisive rhetoric,” the president really ought to take a good look in the mirror.

But Barack Obama has pounced on this posting and has refused to listen to Netanyahu’s repeated apologies and clarifications.  Obama, who focuses on polls, surely knows that African-American support for Israel is declining.  Is he trying accelerate that downward trend? Was Obama playing the race card?
He also wants to portray Israelis as opponents of a two-state solution with the Palestinians by seizing on a mistaken media report that seemed to indicate Netanyahu was backtracking on his previous support of a two-state solution. He was not; Netanyahu merely stated that given the chaos that rages across the region and the repeated Palestinian rejection of peace deals, he could not see the conditions as being ripe “today” for a Palestinian state. But the facts did not matter, nor did repeated clarifications and corrections of that mistaken report. The White House did not even reach out to the Israelis to confirm the report. Obama saw an opportunity to tar all Israelis as rejecting the possibility of a Palestinian state and willfully promoted this distortion. As Edward-Isaac Dovere of Politico wrote:

Obama went further than he or anyone around him had before. Then just when he seemed to be wrapping up, he dug in some more.
“I took him at his word that that’s what he meant, and I think that a lot of voters inside of Israel understood him to be saying that fairly unequivocally,” Obama said.

Therefore, from his bully pulpit (and bully is the right word) he castigates Israelis as being opposed to a Palestinian state.
Polls have shown for many years that Israelis want a two-state solution but they have learned through the bitter experience  (and many wounded and killed) of giving up Gaza to the Palestinians that, given current reality, Palestine is likely to become another terror state.
There are certainly signs that he sees Israelis as being oppressors, colonialists and imperialists and now he wants to use his powers of persuasion to promote those views to other Americans. He may use proxies to do so. A recent example was his Chief of Staff Dennis McDonough telling J Street (an anti-Israel group posing as a pro-Israel group) that Israel’s “occupation that has lasted for 50 years must end.”
Barack Obama’s relationship with J Street shows his desire to conquer and divide the Jewish community and turn American Jews against Israel. He has actively courted and promoted J Street and close allies were among its founders. George Soros, an early and generous supporter of Obama’s nascent political career, hid his pivotal funding of J Street at its inception from prying eyes (and J Street lied about Soros’s funding when asked) until the disclosure of his support was unwittingly disclosed. Obama has given respectability and influence to J Street that it had previously lacked; sending top officials to address their conferences and inviting its leadership into the inner sanctum of the White House.
There are more problematic aspects of Barack Obama’s campaign to turn Americans against Israel. He and his proxies have indulged in tropes that have a doleful history. For hundreds of years Jews have been accused of being warmongers, leading the nations they reside in to war. When Congressional opponents of Obama’s appeasement of Iran suggested his “negotiations” were heading in the direction of arming the mullahs with nuclear weapons, the White House dared them to admit they want war:

"If certain members of Congress want the United States to take military action, they should be up front with the American public and say so," Bernadette Meehan, National Security Council spokeswoman, said in a statement. "Otherwise, it’s not clear why any member of Congress would support a bill that possibly closes the door on diplomacy and makes it more likely that the United States will have to choose between military options or allowing Iran’s nuclear program to proceed”.

Of course, they do not want war, they want a tougher agreement that may prevent war.  But Obama laid down the gauntlet and accused them of wanting to wage war on Iran. Given Obama’s history of eagerly surrendering to tyrants (Assad, Castro, Putin) people are fearful he will do so with the number one terror-sponsoring nation on earth, responsible for the deaths of thousands of Americans.
Jews are often the first target in such campaigns. Obama gave a speech in 2006 against the Iraq War and pointed fingers at who was responsible:

"Opposed to the cynical attempt by Richard Perle and Paul Wolfowitz and other armchair, weekend warriors in the administration to shove their own ideological agendas down our throat…."

This is disturbing. Obama ignored the role of Colin Powell, George Bush, Dick Cheney, Donald Rumsfeld, Condi Rice and other movers and shakers in the Administration. But Perle (who never even served in the Administration) and Wolfowitz (who was a Deputy Secretary) have been lumped together by many anti-Semitic conspiracy theorists as Jews who led us into the Iraq War to serve the interests of Israel. Why make 2 Jews, one of whom had zero role in the government, as the “culprits” behind the war?
Recently, Barack Obama gave us further insight into his views when he publicly lashed out at Senator Robert Menendez for supporting a tougher approach towards Iran by accusing him of acting at the behest of “donors.”
Barack Obama is trafficking in tropes and canards -- dog whistling to the anti-Semitically inclined -- that he (as a self-declared “student of history”) should know have a tragic history. Casting aspersions such as these canards has, finally, raised concerns “about the intentions being signaled by the language the White House is using” While some have questioned whether Barack Obama is anti-Semitic and others declare him to be, as has Mark Levin, one should recall that during the campaign in 2008, when controversy arose over his views towards Israel, he boasted “nobody has spoken out more fiercely on the issue of anti- Semitism than I have."  He was ridiculed by Jake Tapper of ABC News for the claim. But he does have a funny way of showing his bona fides as the world’s greatest fighter against anti-Semitism.
Why welcome of Al Sharpton, with a long history of anti-Semitism and with an American-style pogrom to his credit, to the White House as his point man on race? One of his favorite bloggers is Andrew Sullivan, who traffics in anti-Semitic tropes. Why call Turkish Prime Minister Recep Erdogan among his closest friends among world leaders when Erdogan has been on a non-stop campaign to spread anti-Semitism throughout the region?
Furthermore, the White House leaked to the media a story that Israel was “spying” on America and “stealing our secrets” during the “negotiations” with Iran. Israel denied the allegations. Information gleaned from the Iran talks likely came from eavesdropping on the Iranians and disclosures from the French -- who have serious problems with the weak approach Obama has taken with the Iranians. Allies, by the way, spy on one another all the time. America spied on Angela Merkel and the story the White House leaked about “Israel spying on America” came from American spying on Israel. But the image of the perfidious Israelis spying on America is indelible -- and shameful. There are reasons people feel that “the claims of Israeli spying are part of an intentional American campaign toundermine Israel's standing among the American public and their elected officials.” Investors Business Daily titled an editorial against this outrage “Libel is Obama’s Latest Weapon in his War on Israel” for a good reason.
Earlier in his presidency, when there were future campaigns to come, Barack Obama agreed that policy differences with Israel were to be dealt with diplomatically and privately, free from the glare of klieg lights. Now that he is no longer on the ballot he has been shining a bright line on them and focused his ire and anger not just on Netanyahu and not just on Israel but on American supporters of Israel. He has been portraying Israel in a way that he has not portrayed Putin’s Russia, the mullahs of Iran, and radical Islamic terrorists. Why the disparate treatment?
His goal is to undermine support for Israel among Americans, and he intends to carry on not just until the end of his presidency but, taking a leaf from former President Jimmy Carter, will do so for many years after he leaves office as part of his Grand Plan to continue to fundamentally transform America and Americans’ views of Israel.