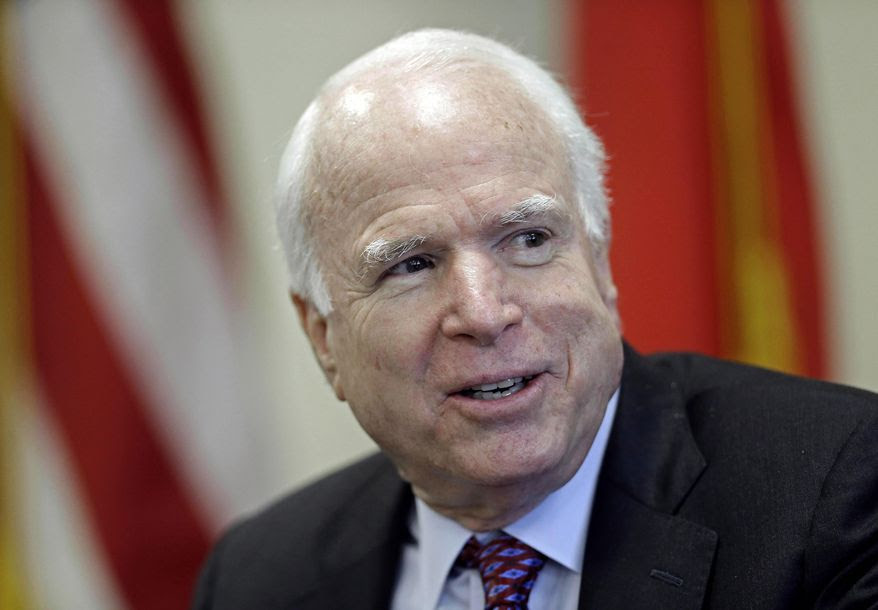 Sen. John McCain, Arizona Republican, said it was necessary to send a signal to the unaccompanied minors preparing for another run at the U.S.-Mexico border this year that they will be sent back rather than released into the U.S., as all of the children from Guatemala, Honduras and El Salvador were last year. (Associated Press)

The Senate approved non-binding language as part of its budget late Thursday calling for the law to be changed to speed deportations of illegal immigrant children from Central America — but fell just short of the 60 votes that would be needed to force a bill into law later.
Sen. John McCain, the Arizona Republican who pushed the change, said it was necessary to send a signal to the unaccompanied minors preparing for another run at the U.S.-Mexico border this year that they will be sent back rather than released into the U.S., as all of the children from Guatemala, Honduras and El Salvador were last year.
“This has got to stop,” Mr. McCain said.
The vote was 58-42, with three Democrats and one independent joining all Republicans in voting for the change. It came as one of dozens of votes on the budget, where a simple majority is needed to add non-binding language.
But passing a standalone bill eventually would require 60 votes to overcome a certain Democratic-led filibuster, and Thursday’s tally was shy of that.
The law allows the government to quickly send illegal immigrant children from Mexico or Canada home, but requires children from other countries to be processed and released to social workers or sponsors in the U.S.
Analysts said that difference was partly responsible for last summer’s surge of illegal immigrants, which saw more than 10,000 unaccompanied cross per month at the peak, and saw a total of more than 68,000 cross during the entire fiscal year.
Crossings are down 40 percent this year, but that still puts the country on pace for the second-highest surge in history, of more than 40,000 children.
“Let’s keep the current law in place,” pleaded Sen. Mazie Hirono, Hawaii Democrat, who said the Central American children who are detained and returned would be held in concrete cell block detention centers, which she said was “no place for children.”
The surge overwhelmed immigration agents, Justice Department’s lawyers and the Health and Human Services-contracted social workers who had to hold the children and try to place them with sponsors.
Homeland Security officials have vowed to be better prepared this year — though little has been done to stem the pull factors that draw illegal immigrants to the U.S.
The Democrats who voted with Republicans to speed deportations were Sen. Joe Donnelly of Indiana, Sen. Joe Manchin of West Virginia and Sen. Claire McCaskill of Missouri. Sen. Angus King, a Maine independent who usually sides with Democrats, also joined the GOP in backing the change.
Read more: http://www.washingtontimes.com/news/2015/mar/26/senate-votes-speed-deportations-illegal-immigrant-/#ixzz3VYoeIqRG Follow us: @washtimes on Twitter
Posted by theodore miraldi at 1:24 AM