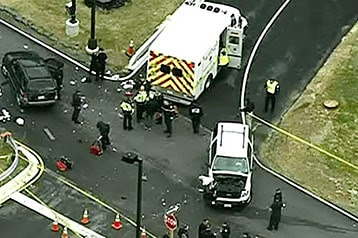 
Shots were fired Monday morning after two people in a vehicle tried to ram a gate at Fort Meade, a military installation in Anne Arundel County, according to an official with knowledge of the investigation.
One person was killed and at least one other person was injured, according to two law enforcement officials. Few other details were immediately available about the incident which occurred around 9 a.m.
Anne Arundel County Fire officials confirmed that they had sent units to NSA’s facility but said they could not release any information because the incident is on the NSA property.
Just before 11 a.m., NSA officials said they had no further information.
The military installation of Fort Meade in Anne Arundel County has about 11,000 military personnel on site and another 29,000 civilian employees, according to its web site. The facility sits near the areas of Odenton and Laurel and is the third largest employer in Maryland. It houses the NSA and other federal agencies.
At the Fort Meade police headquarters, a spokeswoman said “preliminary information” was that two people showed up injured at the gate of the facility.” But she gave no other information and referred calls to police at Fort Meade.
Local television cameras showed two vehicles that were damaged near a gate at the military base. One emergency personnel worker appeared to be loaded into an ambulance.
Marci Miller, a spokesperson with the NSA public affairs office, said there was an incident near the campus but could not release further details at this time.
But officials at the FBI’s Baltimore office said they are on the scene but are not the lead agency and referred inquiries to the NSA.
Earlier this month, a Beltsville man was arrested in a string of shooting incidents at public buildings around suburban Maryland, including one shooting at a NSA building. The building is along a stretch of road just east of the Baltimore-Washington Parkway, separate from the agency’s Fort Meade headquarters.
Hong Young, 35, who was a former prison guard was a suspect in shootings at nine locations. No one was seriously injured in any of the incidents, which also occurred outside stores and along an interstate in Maryland.
He told investigators that he was “hearing voices” that told him to fire the shots. Police found 10 firearms, hundreds of rounds of ammunition and a crossbow in a search of his home.
Lynh Bui, Ellen Nakashima and Peter Hermann contributed to this report.
http://www.washingtonpost.com/local/crime/officials-respond-to-incident-at-nsa-on-fort-meade-campus/2015/03/30/08bdfe56-d6e1-11e4-ba28-f2a685dc7f89_story.html?hpid=z1
Posted by theodore miraldi at 11:36 AM