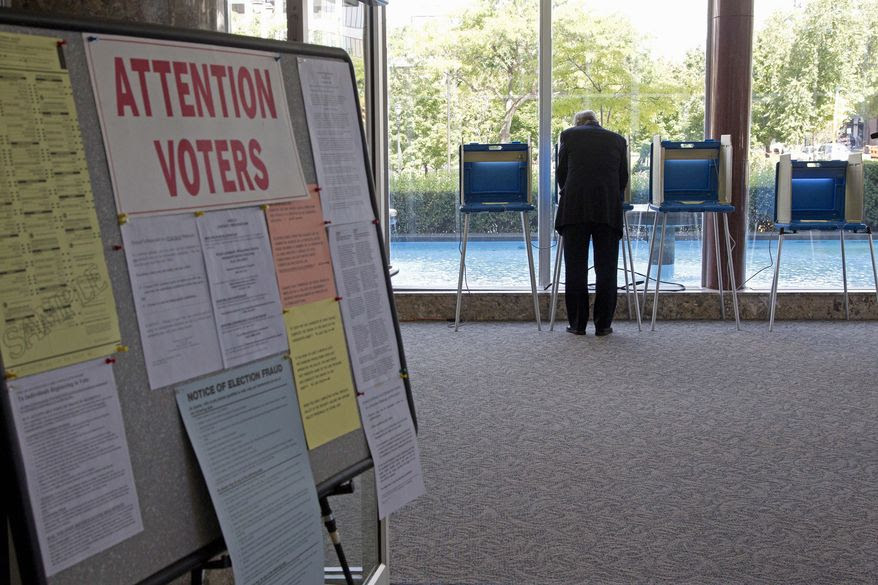 FILE - In this Sept. 9, 2010 file phoro, a lone voter takes part in early voting in Milwaukee. The Supreme Court deals with churning election rules in several states less than a month from November's voting, blocking voter ID laws in Wisconsin while siding with Republicans for stricter rules in North Carolina and Ohio. In Texas, a federal court strikes down a voter ID law, but the state may still appeal that ruling. (AP Photo/Morry Gash)


The Supreme Court on Monday rejected an appeal to overturn Wisconsin’s voter identification law, upsetting civil rights activists concerned the law discourages minorities from casting their ballot.
The high court said it wouldn’t hear an appeal filed to overturn the voter ID law, which was signed into law in 2011 by Republican governor and potential 2016 presidential contender Scott Walker. The American Civil Liberties Union immediately filed a motion to stop the law from going into effect.
The ACLU said in a statement that it is challenging the law on behalf of numerous Wisconsin voters because it violates the 14th Amendment’s equal protection clause. The union also alleges that the approved changes violate section two of the Voting Rights Act, which prohibits against discrimination in voting. The Wisconsin law requires voters to present photo identification before they cast their ballot.
Mr. Walker has defended the controversial law, calling it worthwhile if it stops one person from casting a fraudulent ballot.
“It doesn’t matter if there’s one, 100 or 1,000,” Mr. Walker said of the law during a debate in October. “Amongst us who would be that one person who would like to have our vote canceled out by a vote that was cast illegally?”
Last year, a federal district judge declared the Wisconsin law unconstitutional, but that was later overturned by a three-judge panel on the Seventh Circuit Court of Appeals. The Supreme Court blocked the law from taking effect ahead of last November’s mid-term elections, because absentee ballots had been mailed containing no information about the need to present photo identification.
ACLU Voting Rights Project Director Dale Ho expressed concern that the Supreme Court decision contradicts a previous stance the court has taken in which it “made clear that states may not impose new requirements for voting in the weeks before Election Day.” Wisconsin’s general elections will take place on April 7.
“The situation is even more compelling here because absentee ballots have already been mailed out for the April election, and early in-person voting has begun,” Mr. Ho said. “Imposing a new restriction in the midst of an election will disenfranchise voters who have already cast their ballots. It is a recipe for disaster.”
Republican Wisconsin Attorney General Brad Schimel said the new law will not be implemented for the upcoming election because absentee ballots are already in the hands of voters, according to a statement. However, that law will be in place for future elections, he said.
Voter identification laws have been passed in a number of Republican-governed states, despite objection by Democrats, who claim that voter fraud is rare. Voters rights advocates are concerned the new rules are intended to deter the poor, minorities and college students from voting for Democratic candidates. Those groups that are less likely to possess the necessary forms of identification.
Read more: http://www.washingtontimes.com/news/2015/mar/23/supreme-court-rejects-challenge-wisconsin-voter-id/#ixzz3VEjVo6ll Follow us: @washtimes on Twitter
Posted by theodore miraldi at 2:57 PM