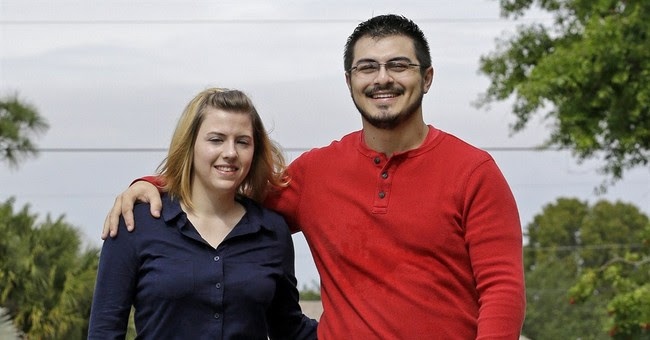 Back before self-esteem spirit animals and pre-nup voodoo dominated the contents of free-form wedding vows, we had simple yet robust odes like ‘in sickness and in health’ and ‘for richer or poorer.’
The true magic of those words lies in their claim that the deepest reserves of sacrificial love can still be tapped when life’s trials are the most daunting.
But there is another angle to consider when ‘for richer or poorer’ is weighed and measured in light of modern data. When it comes to viewing marriage as a kind of lottery ticket, richer stands out as a safe bet. In fact, marriage alone appears to be the silver bullet par excellence for fighting poverty according to research conducted by the “centrist” Brookings Institution.
As reported recently by both National Review and the Acton Institute, children born in the lowest income quintile to married parents who stayed married had just a 19 percent chance of remaining at the bottom. Which means a married mom and a dad provided those children a better than 80% chance of escaping poverty.
And the math works in reverse, too. Children born into the middle class have only an 11 percent chance of ending up in the bottom income quintile, if they are protected by married parents—but a 38 percent chance if their parents never marry. Meaning they are three times more at risk of descending into poverty without a married mom and dad.
Here, in a nutshell, is government’s reason to promote marriage through tax policy and other fiscal measures. The smallest and the oldest social group in the history of mankind holds within it the power of the mustard seed. Just plant it in decent soil and watch your progeny prosper.
Notice that we haven’t even talked about God or religion or romance yet. Marriage can hardly be discussed without taking those into account at some point, but a baseline discussion of its value need not be preachy or something of the Hallmark variety.
The self-proclaimed reason and science crowd ought to like that if they are honest. Just the facts. And the fact is marriage matters.
But what passes for reason is often rabid these days and science can be painfully pseudo. The union of man and woman has been traded for the idea that since less than 2% are allegedly ‘born that way,’ they not only deserve to get married, too, but the florists and cake bakers and, soon enough, churches who don’t comply with that fraud must be brought to bended knee.
You will be made to care. Now march you bigot.
The pagan version of heaven and earth is being moved at break-neck pace so that a tiny slice of sexual libertines can do their touchdown dance on top of what’s left of Western Civilization. No legal stone is being left unturned to promote a sterile, non-childbearing fiction that can’t possibly be the fabled ‘right side of history’ because it can’t, for starters, procreate an actual future into existence.
You know, science and stuff.
On the other hand, the Democrats’ most reliable voting block for decades, black Americans, are almost being pushed into self-immolation. Because fighting for the remedy to their problems – the actual God-fearing, social-mobility-enhancing definition of marriage – is clearly not worth the trouble and energy that has been put into making sure that Tom is able to “marry” Dick and Harry.
And so the out-of-wedlock birth rate among African Americans today is 73 percent, three times higher than it was in the 1960s. Ergo, the black poverty rate at the beginning of this decade was 27.4 percent – three times higher than the white rate. Despite making up only 13 percent of the total population, blacks accounted for 48.7 percent of all arrests for homicide, 31.8 percent of arrests for forcible rape, 33.5 percent of arrests for aggravated assault, and 55 percent of arrests for robbery.
But, like, whatever. Wasn’t that joining of the world’s first homosexual “throuple” recently just fabulous?
No, not really say the black preachers who joined Alabama Chief Justice Roy Moore and other conservative leaders last week to reject both redefining marriage, and the courts that bully it into cultural legitimacy.
Those men understand that real survival for black America and ultimately all of mankind requires real marriage, not some circus tent variety. Those black pastors know first-hand this culture desperately needs to return to revering marriage, beginning with more good husbands and fathers.
Another group of spiritual leaders called Vision America Action has also had enough with the way things are headed. It is crafting a ‘Declaration of Civil Disobedience’ that it plans to send to the United States Supreme Court in anticipation of this summer’s marriage ruling.
Liberty University’s Mat Staver, who is helping gather signatories to that document from across the Christian spectrum of leaders and influence makers, said the issue at hand is too important to simply wait around “for crumbs from the court.”
This is a time to fight and fight hard, and so Staver will. Because the alternative – accepting or anointing that which is unjust – isn’t an option.
The answer to marriage’s decline isn’t to toss the institution overboard altogether. That is child-like reasoning, but what else can you expect from a movement based on nothing other than whims, desires, impulses, and lies. I’m old enough to remember when they were still selling us that “marriage freedom” wouldn’t cost anyone else their freedom. You know, way back in 2010.


However, the data doesn’t lie. The rate of bondage into poverty is directly tied to the institution of marriage. Thankfully, there are still some adults willing to do and say what’s right, even while the fully-grown children are throwing a tantrum.
http://townhall.com/columnists/stevedeace/2015/03/28/the-data-proves-marriage-matters-n1977400/page/full
Posted by theodore miraldi at 5:20 PM