The Grim Future of the American Worker 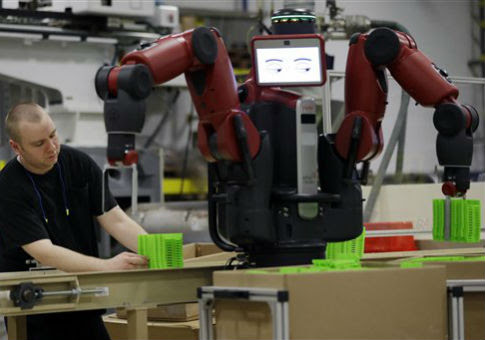 
Dan Dimicco is the former CEO of Nucor, America’s largest steel producer. Having helped Nucor survive and indeed grow during the recent recession, he now hopes to do the same for the whole nation. In his new book, American Made, Dimicco calls on lawmakers to implement an ambitious industrial policy that, he claims, would create 30 million jobs in the next 10 years.
In clear, simple language Dimicco presents the complex issues facing the American economy: “Today’s crisis is a massive jobs deficit and an economy ill-equipped to generate the jobs the country needs. Long term, we have a debt crisis, too. … No jobs means no economic growth; no economic growth means no tax revenue for government services.” More than 20 million Americans are unemployed or underemployed, he notes, and when one includes those working part-time and those who have stopped looking for work, our unemployment rate is 13.1%. To fix all this and put America back on the path to economic prosperity, he says, in equally straightforward language, we must revitalize our manufacturing sector, punish countries that manipulate their currency, develop our domestic energy supply, and spend a great deal—$3.6 trillion—tidying up our infrastructure.
His analysis of our economic malaise is not without merit, but I have my doubts about his proposed solutions. Dimicco assumes that increased manufacturing activity will lead to an abundance of new jobs for middle-class Americans. Improving infrastructure and producing cheap energy from new natural gas sources would incentivize companies to ‘re-shore’ their manufacturing operations back to the US. This would increase our industrial output—but increased output is no guarantee of the massive job growth that Dimicco predicts.
Dimicco claims that “a country that doesn’t create or make or build things is doomed to mediocrity. Manufacturing, and the innovation that comes with it, is indispensable to the vitality of a country.” Maybe so—but American industrial output is higher than it has ever been! Manufacturing jobs have nevertheless been on the decline. This apparent paradox is largely the result of technological innovation: manufacturers are using robotics and automation, producing more goods at a lower cost with the help of fewer workers.
Dimicco should meet Baxter. Baxter is a two-armed, pedestal-mounted robot that can pick and package small objects or tend to other machines. His manufacturer, Rethink Robotics, say that he will work alongside human employees rather than replace them. But at $25,000 (not per year but once!), doing just that will surely be tempting for manufactuers. Robots don’t require a pension plan or government-mandated health insurance.
Later this year Baxter will compete against four of his fellow robots in the Amazon Picking Challenge. Each will attempt to select objects from a shelf and place them on a table—a simplified version of the work currently performed by Amazon’s human workers in the company’s distribution centers. If Baxter catches on, he will displace far more workers than are necessary to manufacture copies of him.
Such displacement is not a new phenomenon: the percentage of the American workforce who have found work in manufacturing has been decreasing since the end of World War II. Whether one praises this fact for what it does on behalf of the nation’s productivity or laments its consequences for those employed in manufacturing, it cannot be ignored. The only manufacturing jobs that show any sign of growth are those that require a high degree of skill and training: Only the well educated can operate the computer-run machines that dominate manufacturing today.
Throughout American Made and a year’s worth of blog posts, Dimicco makes almost no mention of the disruptive effects of technology on industrial labor. Furthermore, some of Dimicco’s most important claims regarding the number of jobs that could be created by improving our infrastructure and implementing his industrial policy are sourced to proprietary analysis, the data for which cannot be accessed by the public. The math must be pretty magical.
Dimicco’s heart is in the right place here, something that is clear enough even without considering the fact that he has promised to donate all proceeds from the sale of this book to veterans’ groups. But, as it has ever been with complex national problems, noble intentions aren’t enough.
http://freebeacon.com/culture/the-grim-future-of-the-american-worker/
Posted by theodore miraldi at 1:23 PM