The knives are out: O’Malley hacks away at Hillary 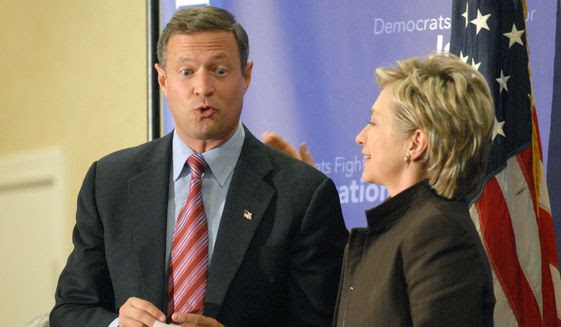 Even when former Maryland Gov. Martin O'Malley wows the crowds in Iowa and other early-voting states, they say the likely presidential hopeful would make a good vice president.
That’s a powerful blow to a candidate who is trying to make his way to the top of the ticket and beat back naysaying political analysts

who give him no chance of winning or who speculate that he’s actually running for the No. 2 spot or a Cabinet post under Hillary Rodham Clinton, the presumed front-runner for the Democratic nomination.
And these days, Mr. O'Malley is quick to challenge the idea that Mrs. Clinton is “unbeatable” and her nomination is “inevitable.”
“Let’s be honest here, the presidency of the United States is not some crown to be passed between two families. It is an awesome and sacred trust that [has] to be earned and exercised on behalf of the American people,” he said Sunday on ABC’s “This Week.”
The former governor, who has laid the groundwork for a challenge to Mrs. Clinton in 2016, said he would announce his decision on the race “this spring.”
More than any other potential Democratic candidate, Mr. O'Malley has undertaken an aggressive travel schedule in Iowa and New Hampshire. He’s garnered standing ovations from party activists with his populist rhetoric and liberal agenda, which includes calls to raise the minimum wage and break upWall Street

banks.
Larry Hodgden, Democratic Party Chairman for Iowa’s Cedar County, said he was impressed with Mr. O'Malley and believed he will do well in the state’s nominating caucuses, though he offered a major caveat.
“Even if he doesn’t rise to the top of the Democratic ticket, I do believe that he would make a very, very good vice presidential candidate down the road,” said Mr. Hodgden, who met Mr. O'Malley earlier this month at an event in Cedar County.
Like other party activists, Mr. Hodgden said he is waiting on Mrs. Clinton, who has been hunkered down in hopes that the scandal over her exclusive use of private email during her tenure as secretary of state will blow over.
“I’m holding back my judgment until she gets out here and begins to campaign, and then I’ll compare her to whoever else is in the race,” he said.
“It depends how hard Hillary wants to campaign in Iowa and what her message is. And right now it’s secret. Nobody knows,” said Mr. Hodgden. “We know what she’s done in the past, but elections for president are about the future, and we need to know what Hillary Clinton wants to bring to the contest.”
Mr. O'Malley’s supporters insist that Mrs. Clinton isn’t invincible despite her huge lead in the polls.
“This isn’t about Hillary. It’s about Martin O'Malley,” said Terry L. Lierman, a former chairman of the Maryland Democratic Party who is expected to play a key role in Mr. O'Malley’s campaign.
“This is about supporting a governor, a council member, a mayor with loads of experience

demonstrating that he can get things done,” Mr. Lierman said, referring to Mr. O'Malley’s public service in Baltimore. “He’s a doer of deeds. It’s deeds that are important, not words.”
He brushed off speculation that Mr. O'Malley would be running for anything other than president.
“They have nothing else to do but speculate,” he said. “She [Mrs. Clinton] hasn’t decided if she is running yet either.”
In his Sunday appearance on “This Week,” Mr. O'Malley acknowledged that he had supported Mrs. Clinton’s presidential primary campaign in 2008 as her Maryland campaign chairman, saying, “I certainly believed that for those times she would be the best choice for us as a country.”
Asked if he still believes that, he said: “I believe that there are new perspectives that are needed in order for us to solve the problems that we face as Americans and also the problems that we face as people on this planet. And I believe that new perspective and new leadership is needed.”
Mr. O'Malley has invested heavily in Iowa, a state he first visited in 1983 as a volunteer for then-Sen. Gary Hart’s presidential campaign.
He made four trips

to Iowa last year, put 14 staffers to work on state campaigns, contributed nearly $50,000 to local candidates and now has at least one full-time staffer in the Hawkeye State, according to The Associated Press.
Despite his early jockeying in Iowa, Mr. O'Malley doesn’t even register in the polls.
Mr. O'Malley received zero support in a Quinnipiac University Poll last month of likely Iowa Democratic caucus voters.
Mrs. Clinton got 61 percent of the vote and far outpaced all of the potential contenders. Only Massachusetts Sen. Elizabeth Warren, a darling of the party’s far left who so far has resisted calls to run, broke out of single digits, with 19 percent.
Vice President Joseph R. Biden took 7 percent, Vermont Sen. Bernard Sanders got 5 percent, and former Virginia Sen. Jim Webb got 2 percent.
But Mr. O'Malley finished last in the poll.
Mr. O'Malley’s team says it’s too early to worry about polls and that he wouldn’t get in the race if he didn’t think he could win.
They also are banking on the hope that his early visits will raise his poll numbers in the next round of surveys.
Mr. Webb is making his first visits to Iowa next week, where he’ll appear with Mr. O'Malley at the Polk County Democrats’ annual Spring Awards Dinner in Des Moines.
Mrs. Clinton last month declined an invitation to attend the event.
It will be Mr. O'Malley’s second trip to Iowa this year. He also will make a return trip to New Hampshire on Tuesday.
• Valerie Richardson contributed to this report.
Read more: http://www.washingtontimes.com/news/2015/mar/29/martin-omalley-disputes-notion-hillary-clinton-201/#ixzz3VsgFMxFC Follow us: @washtimes on Twitter
Posted by theodore miraldi at 10:55 AM