The Many Costs of Obama's Amnesty 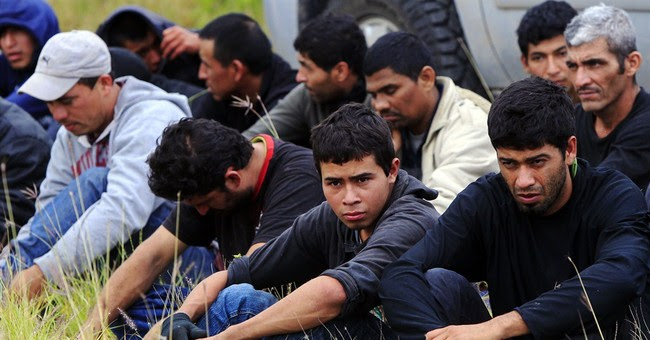 
Seeing as the costs will come due only after Barack Obama has left the White House, I guess he doesn't care how high those costs are. But the costs are horrendous, as just added up by our country's foremost authority on such things, Robert Rector of The Heritage Foundation.
Rector told the House Oversight and Government Reform Committee last week that the lifetime costs of Social Security and Medicare benefits paid to the millions of immigrants to whom Obama is granting legal status will be about $1.3 trillion. Rector's calculation is based on his assumption that at least 3.97 million immigrants will receive legal status under Deferred Action for Parents of Americans and Lawful Permanent Residents, and the average DAPA beneficiary has only a 10th-grade education.
DAPA recipients, according to Rector's calculations, will receive $7.8 billion every year once they get access to the refundable earned income tax credit and the refundable additional child tax credit. Those EITC and ACTC recipients will also be allowed to claim credit for three years of illegal work, which will sock U.S. taxpayers for another $23.5 billion.
This was confirmed by IRS Commissioner John Koskinen, who told Congress on Feb. 11 that immigrants who didn't pay any taxes or who used fake Social Security numbers will nevertheless be able to claim back refunds under EITC once they get new Social Security numbers under Obama's amnesty. Koskinen said that he doesn't know how much these tax refunds will cost and that the White House never checked with him before announcing the amnesty.
The average DAPA-eligible family already receives about $6,600 a year in means-tested welfare benefits. That includes food stamps, school lunch (and breakfast), Medicaid, the State Children's Health Insurance Program and the Special Supplemental Nutrition Program for Women, Infants and Children.
Many Americans labor under the false assumption that because most immigrants are hardworking, they do not depend on welfare assistance. In fact, as Rector patiently explains, most welfare benefits go to households with children headed by a low-income employed adult.
Rector estimates that the combined cost of means-tested welfare benefits the immigrants who came here illegally now receive, plus other goodies such as EITC and ACTC cash, will encourage increased illegal immigration in the future. The average American, whose children and grandchildren will end up burdened with this enormous debt, must ask whether someone is trying to destroy America.
The Government Accountability Office has already reported that even the debate over legalizing the presence of certain immigrants was "a primary cause" of last summer's surge of Central Americans crashing our southern border. Even if those teenagers were not eligible for asylum or legal status when they arrived, they knew that deportations could take years, giving them the chance to disappear into the shadows.
Look at California for a preview of our future under Obama's immigration plan. The Hispanic population is now almost equal to the white population, and almost 50 percent of babies born in California are Hispanic.
Nearly a third of "English learners" in U.S. public schools are third-generation Americans who still are not speaking English at home, and the Hispanic illegitimacy rate is 53 percent. The cheap labor welcomed by employers is not only a huge impediment for American job seekers but also a big expense to taxpayers, who are hit with new costs of schools, hospitals and prisons.
The agency charged with approving the applications for Obama's amnesty is getting ready for more than 800,000 applications in the first couple of months. This agency is facing the prospect of trying to process at least 4 million pieces of mail connected with the new amnesty, and all applications are supposed to be opened in the presence of two workers, one with a "secret" security clearance.
Obviously, we need a new bureaucracy for this awesome task, and U.S. Citizenship and Immigration Services has already started to hire several hundred new employees and train them. Luke Bellocchi, a former deputy ombudsman for USCIS, told the Senate Homeland Security and Governmental Affairs Committee in February, "It's going to be hard to tell how much fraud there is."
Kenneth Palinkas, president of the National Citizenship and Immigration Services Council, said: "How you could have proper adjudications this way is beyond my scope of reason. They want to cleric-alize the job, and they're really not concerned about whether the documents entered are fraudulent or not. They just want to push the papers along."
The two factors that Americans are most concerned about are jobs and voter fraud. The United States has accepted two new immigrants for each additional job created since 2000, according to federal data, and expert witnesses have testified that once the amnestied immigrants are given Social Security numbers and driver's licenses, there will be no way to stop them from registering to vote.
http://townhall.com/columnists/phyllisschlafly/2015/03/24/the-many-costs-of-obamas-amnesty-n1975075/page/full
Posted by theodore miraldi at 8:38 AM